I was talking with a friend — who is a psychologist — about how I wasn’t exercising consistently, even though I knew of the massive benefits for brain and body. Not to mention the stress relief all parents can use. The conversation went like this:

“That’s not realistic. The goal needs to be one that you have almost no chance of failing. What’s actually realistic?”

“OK … how about three days a week? It’s hard for me to go by myself. But I can get to my favorite yoga studio once a week. I already meet a friend to go running once a week. So that’s only one day a week on my own. That seems doable.”

“OK. What’s an organization that you hate?”

“Comcast.” (I said this with a vehemence that will not surprise anyone who has contacted Comcast customer service.)

“All right, if you don’t exercise three days a week, you need to write a check for $500 to Comcast.”

We shook on it.

I put a calendar on the fridge. I didn’t mark down the days I intended to work out, like I would have before. I wrote down only the days I actually worked out. It was easy for me to see where things stood. There were weeks when my exercise got bunched up at the end instead of spread throughout. There were weeks when I was sick or traveling and went easy on myself, counting exercise where I didn’t exactly break a sweat. There was one Saturday at 11:45 p.m. that I pulled out the NY Times’ 7-minute workout.

But at the end of the year, every week in that calendar had three workouts. I was amazed.

Why does this work?

1. Ridiculously realistic goal. I was already exercising twice a week (or imagined that I was), so adding only one day felt very doable for me. My yoga studio has $3 childcare and I own a jogging stroller; no excuses there. I also know I need a scheduled group activity a) where people I like expect me to show up, and b) that I enjoy. Joining yet another gym isn’t going to work for me.

What feels realistic to you? Now make it ridiculously realistic. Is your goal to exercise 30 minutes? Make it 5 minutes. What form of movement (that you enjoy) will you do?

2. Accountability. The calendar on the fridge was not only a very visible reminder of my goal, it was a way of keeping me honest. I told people about my plan, mainly because it seemed funny, but this also provided some accountability.

Where will you put your calendar?

3. Painful consequence. Financially supporting a cause you despise is pretty painful, and people are aversive to pain.

What’s an organization that you hate? Go with the first thing that comes to mind. What amount would be painful (but possible) to write on a check?

4. Creates a rule. We’re never going to feel like doing something every single time. It’s far more effective if we create a rule for ourselves. This eliminates the need to put any thought or effort into overcoming our impulse to do something else.

For my husband, it’s “I go running first thing in the morning.” That’s his rule. My rule was “Exercise three times a week or pay up.

As Paul Tough writes in How Children Succeed: Grit, Curiosity, and the Hidden Power of Character, “there is a neurobiological reason why rules work”:

When you’re making rules for yourself, you’re enlisting the prefrontal cortex as your partner against the more reflexive parts of your brain. … Rules are a metacognitive substitute for willpower. By making yourself a rule (“I never eat fried dumplings”), you can sidestep the painful internal conflict between your desire for fried foods and your willful determination to resist them.

What do you think? Are you in? Want to try this with one of your resolutions?

If so, tell me: your ridiculously realistic goal, where you’ll put your calendar, the organization you hate, and how much you’ll have to pay up. Then tell me your rule. Comment below or email me at tracy@zerotofive.net.

p.s. What’s this about exercising only 5 minutes? Or the 7-minute workout I mentioned? Setting an easy exercise goal has gotten even easier, if you’ve been keeping up with studies on the benefits of short, intense exercise. (No? I know, that’s why you’re on my mailing list — I will keep up on all the good studies for you!) I’ll give you the scoop on those next week. 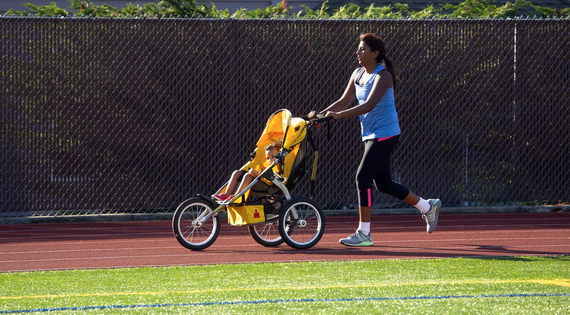 Get more of Tracy's parenting tips.