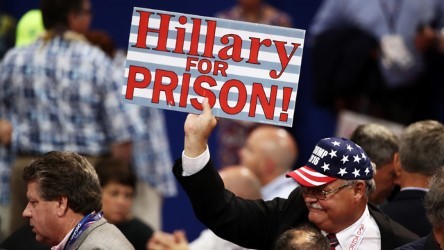 The trembling woman on the stage was grief-stricken, but the crowd was hungry for blood. They cheered and clapped and shouted for vengeance as Pat Smith declared Hillary Clinton "personally responsible" for the death of her son during the raid at Benghazi, Libya.

I thought of Germans pumped up with hatred for Jews and glory for the Motherland, I thought of those that celebrated when the "heretic" Anne Boleyn, Henry VIII's second wife, was decapitated -- for treason and adultery, though many nowadays mistakenly believe for witchcraft.

It wasn't the first time Anne Boleyn had come to my mind when witnessing the gathering storm of Hillary-hating, gaining momentum through decades of nasty press, trumped up scandals, political maneuvering and misogyny.

Anne Boleyn, too, had made the fatal mistake of not staying in her proper wifely place and then getting on the wrong side of her enemies. Anne, too, was "re-created" by the propaganda of her time from a complex, flesh-and-blood woman to a crude cartoon creature, passed down via Catholic polemics, factually loose biographies, sensationalizing novels, films, television: an overly-ambitious, calculating, untrustworthy schemer. If you've seen or read "The Other Boleyn Girl" or "Wolf Hall," you're familiar with her.

There's astonishingly little basis in fact for this nasty version of Anne. She is a fictional creation that lives within a narrative, developed over time, which turned politically motivated lies into inflammatory gossip and alchemized that gossip into "history."

In a more compressed way, historically speaking, the real Hillary Clinton has been subjected to the same poisonous alchemy, bubbling over the last several decades, and ultimately resulting in "dishonest," "untrustworthy," "lying" Hillary--a thoroughly fictional caricature concocted by the GOP, mindlessly perpetuated by a headline-seeking media, and now being charged with murder on the stage of the Republican National Convention.

"We know she enjoys her pantsuits...What she deserves is a bright orange jumpsuit!" That was Colorado's Darryl Glen.

Chris Christie, on the second day of the convention, played prosecutor at a mock trial, calling out each of Hillary's "crimes" to shouts from the audience of "Guilty! Guilty!"

Is it too much to call it a witch-hunt? I don't think so. Think of the ingredients:

1) As first lady, she was deemed that most "unnatural" of creatures: an ambitious woman. She wanted an office in the West Wing! She tried to put through a plan for universal health care! She only had one child! She sneered (or so we were led to believe) at those who stayed home to bake cookies and serve tea.

2) Like the witch of fairy tales (and Anne Boleyn, as described by her political enemies) her appearance was mocked, her flaws exaggerated to the point of deformity (thick calves and ankles: like a sixth finger -- which Anne didn't actually have -- a sure sign of the devil's influence.) Unlike her more feminine predecessors Jackie Kennedy and Nancy Reagan, she didn't know what to do with her hair.

3) Over the decades, she has been blamed for every national disaster from racialized incarceration to the raid on Benghazi. Her vote alone was responsible for the war in Iraq.

4) She has been accused of having extraordinary, evil powers which "enabled" her husband's infidelity, created a recession through the power of her public speaking, allowed her to murder people thousands of miles away, and put an entire nation at risk via 3 emails, incorrectly marked by others at the State Department.

5) Although she has never been convicted (or even tried) for any crime, that's only because of her lies, schemes, and manipulations, which have apparently cast a spell over congressional hearings, the FBI, and of course, her witless minions.

6) She has her own "familiar" -- her husband -- with whom she frequently merges, shape-shifting into a slithery, elusive man/woman called "The Clintons."

History has a lot to teach us. After Anne Boleyn was executed, many who had judged her guilty began to fret and regret their decision, suspecting the charges were trumped up by Anne's political enemies. But it was too late -- her lifeless head and torso were already stuffed into a chest and spirited away.

And the people? They were left with a fickle, narcissistic, unstable ruler whom no one felt safe with anymore.

But that's for another history lesson.

Susan Bordo is the Singletary Chair in the Humanities at University of Kentucky and the author, most recently, of The Creation of Anne Boleyn. She is currently writing a book about Hillary Clinton.