A few years ago I worked on a project that was tied to Days of Our Lives. For those of you who grew up with soap operas (or maybe still try to catch them from time to time) you know that this show has been on the air for 50 years.

In fact, the publisher went back for many, many printings of it. A funny back story of this is that initially Barnes & Noble didn't order enough books, figuring no one would buy them.

Clearly, someone should have done some market research. Amazon stocked up, and stocked up heavily, and once Barnes & Noble sold out, guess where soap fans went?

So, I was at the Daytime Emmy's in Vegas during this book release time and, prior to the start of the awards show, I was outside the auditorium as many of the fans started arriving. Hundreds of them had been there for hours.

I was walking around with the Days book when a woman walked up to me. She asked, "Are you with the show?" Before I had a chance to say no, she launched into a particular issue she was having with Days. She said that several of the sets were reusing the throw pillows and it was distracting to her to see them used over and over again in different houses.

Now, you might think this was creepy, that someone noticed something like that, but I see something very different here. I see a Super Fan.

When you think about creating Super Fans, I think that we can all take a lesson from the Soap Opera market. These actors spend an inordinate amount of time visiting with fans, having lunches with them, sending them correspondence, responding to them on social media (and most, if not all of them, manage their own social media accounts).

With all of the options we have for television these days, soaps should have died out years ago, but they haven't. Why? The Super Fan.

How can you build a Super Fan? Well, it starts with engagement.

In one test case, we asked one of our authors to put up a blog post about who she'd cast if her book became a movie. Her fans loved it and she got a ton of comments. 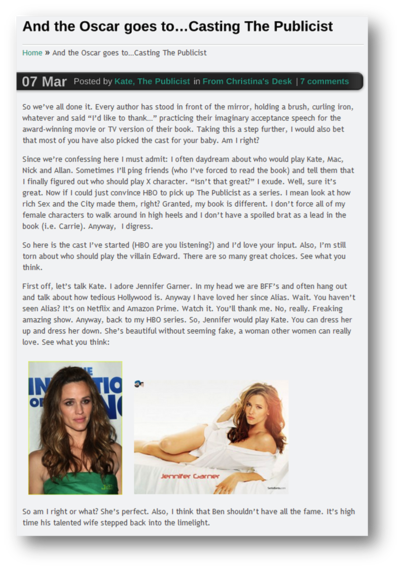 The fact is that 83% percent of Americans want to write a book, and 100% of those authors have dreamed of their book becoming a movie or a TV series. This post resonated with readers visually and also keyed in to their core interest of becoming an author and living the dream.

Then, we took this a step further. We added character profiles to the site consisting of pictures of the characters along with snippets about them. I've also encouraged this author to pull together a playlist for her book and to ask fans for the songs they think fit with the characters.

Then, we also had trading cards made for the book. You can get these done at GotPrint, and I had them designed on 99Designs for $150. Easy. I also had them done for my How to Sell Books by the Truckload on Amazon.

I have taken both of these sets of cards to events and authors *love* them. In fact, I just took 200 cards of each to a conference I spoke at, and I figured I'd wind up taking a bunch home with me but they were gobbled up. 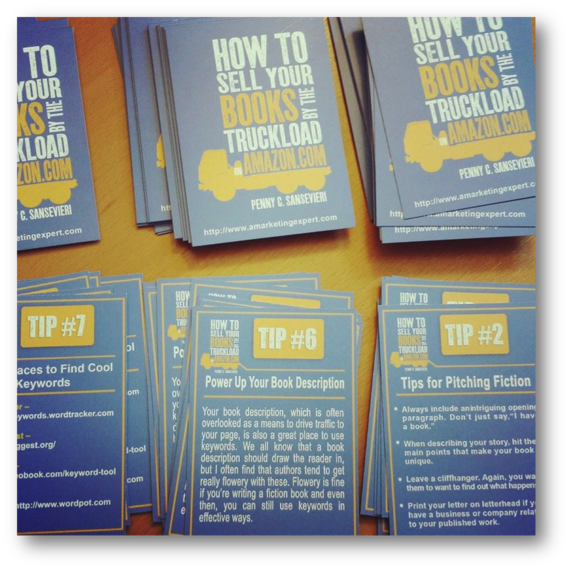 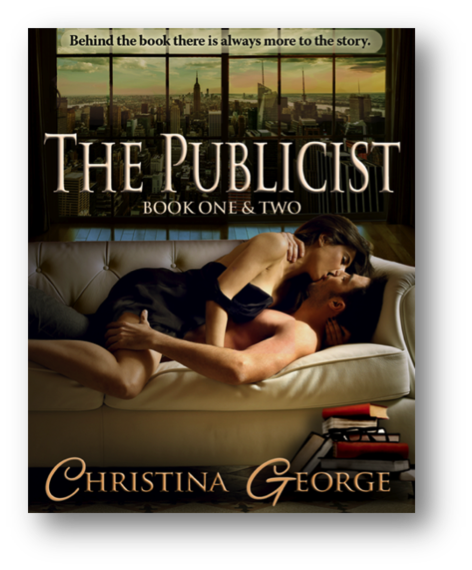 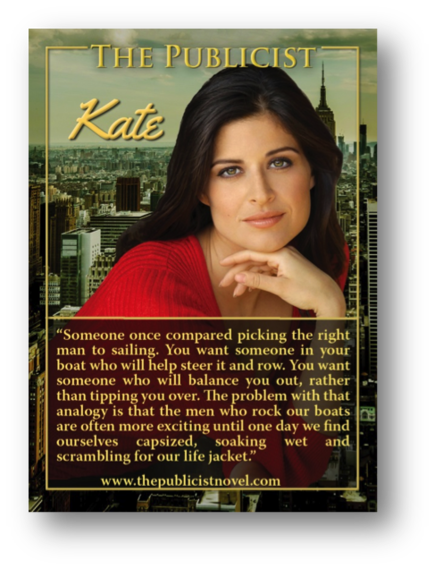 The next step was to take these trading cards (for the fiction book) and send them to every blogger or reader who had reviewed the book. The result? Check this out on Twitter, along with a post from a blogger who had taken a picture of the cards. 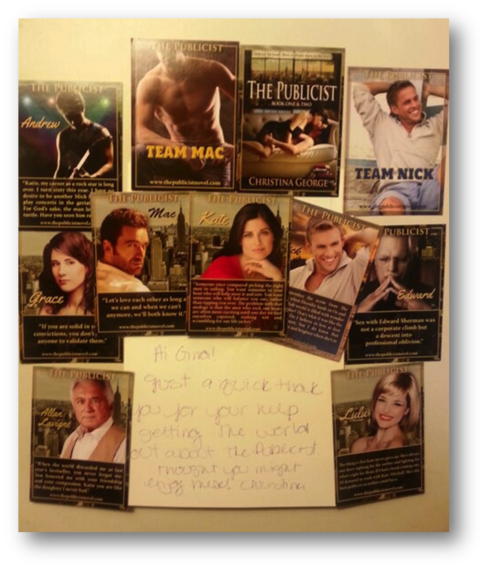 And check out some of the tweets: 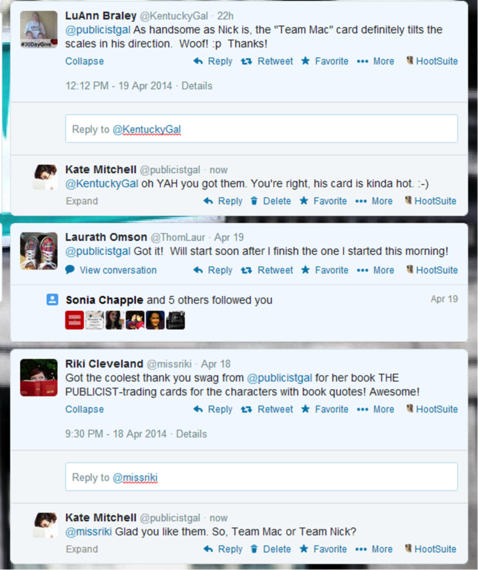 I also did this with the Amazon cards (sending them to reviewers) and they *loved* this!

Oh, and remember that letter to readers we put in the back of the book? Well, readers responded (some just wrote reviews and did not email, but others did both). To those fans who emailed the author, we offered to let them read book three (the final book in the series) in galley form to get their feedback on the book.

Feedback from readers who love you? You bet. Guess what? They loved it. Some posted it to their Facebook page and told all their friends, others tweeted on it. This small gesture made readers feel important, and we all want to feel like we matter, don't we?

Why does all of this work? Clearly there's some fun engagement going on but it's more than that: We're really taking the time to spend time with our readers, even if it's just virtually.

It takes very little to respond to an email. I mean I get emails from authors wanting advice all the time. I try to respond to many, if not all. It takes a few minutes, but the process of connecting with a reader in a really honest way can benefit you ten-fold.

Understanding the Metric of Free

I have talked about the power of free and how you can use free to drive your success. We had a book we were promoting as a 2-day freebie. In those two days the book generated 61,000 downloads!

Out of that, the author got a couple of hundred emails from readers (and this happened almost immediately) who had read and loved the book and were encouraged to write to her (thanks to the letter in the back of the book!).

This author decided to take this process a step further and she wrote back to all the readers, telling them that they'd been included in her Exclusive Reader Club which means that they would get access to her next book, for free, just for writing (and posting a review, although she did not ask them for a good one, just that they post a review).

This model helps to build a community with readers. She also invited the readers who wrote to invite up to ten of their friends to join this "club" and again, the "cost" of entry was a review. She didn't even tell them to buy the book, if the reader felt that $1.99 was an unfair price, she'd send it to them for free.

Now this might seem counter-intuitive to you, but what she's doing is building solid rapport with her readers, building trust, and also being fair. She wants a review but if you don't want to buy the book, you don't have to. To date, no one has asked for a freebie.

Why? Because they came into this "funnel" through a friend. A friend tells them about the book and "you should sign up for book three for free," and since we trust our friends, we know that they probably know what we  like.

We'll see where this winds up when her next book comes out, but for now, this is turning out to be a great way to build an eager tribe of Super Fans.

In a world where anyone can publish and many do, you really need to own the shelf -- your shelf, your genre. How can you do that? By publishing a lot. Now, keep in mind that short is the new long so these don't have to be long books.

In fact a few weeks ago I talked to a publisher who told me that a word count between 20,000 and 50,000 was their sweet spot. They said that they sell a ton of books at that word count. This does not mean that they don't publish full-length books because they do.

But sometimes you just want a quick read, right? So does your reader. Owning the shelf is not just key to exposure but also, if you're trying to build your Super Fan empire, they're going to want more of your books -- and this is a great way to give your readers what they want.

I just finished a fantastic book by Nicholas Lovell called The Curve. If you haven't read it I highly encourage you to do so. This author talks about the Super Fan and goes on to say that technically, you only need 1,000 Super Fans to get a bestseller.

I mean, think about it. A Super Fan will tell ten of their friends, maybe 100 or more.

A Super Fan will tell ten of their friends, maybe 100 or more.

You're more inclined to buy something when someone you trust recommends it, right? Hence the Super Fan.

When I say "sell the experience" what I mean is that you use free to lower the barrier to entry, to build that Super Fan-dom and now what? Now it's time to roll out things like Special Editions, Fan events (I had an author who planned a fan tea event at a local tea shop and it was a huge hit).

Sure, you can do a book signing and those are great, but sell the experience. You want each of your fans to feel special, right? Make them feel special. People will pay for an experience.

Consider Starbucks. Twenty years ago if someone had told me I'd be dishing out $5 for a latte I'd tell them they were crazy (and I'm not even sure I knew what a latte was back then).

Starbucks charges between $3 and $5 for a specialty beverage, you'd think that at some point their success would drop off, but it does not seem to be declining. Starbucks sells an experience and so should you!

To create a wildly successful book, you need Super Fans. And whether you liked it or hated it, the insane success of the book Fifty Shades of Grey was largely due to the Super Fans who loved this book so much that they shared it with their friends and enthusiastically recommended it to their friends on social media.

Super Fans are golden, whether they are recommending a book or telling you about the throw pillows - you should cherish each and every one of them.