I first read about Meathead Movers in September when LA Weekly wrote about their free moving services to those fleeing domestic violence. As the founder of a corporate social responsibility and cause marketing firm, I was inspired. Curious about their program's origins and operations, I met with Aaron B. Steed, co-founder and CEO of Meathead Movers, while he was on a trip to NY.

Here's what I learned:

Identify A Need
Meathead Movers launched in 1997 when two teen brothers, Aaron and Evan, were looking to earn some extra money after school. It was a different company than the one we know today. With no other employees, offices, or fee structure, clients would rent the moving trucks, pick up the brothers before the move, and pay whatever they felt the services were worth.

Soon after, Aaron received a phone call. Excited to talk to a new potential customer, he was caught off-guard by the trembling voice on the other end of the line, "I need your help," she said between frantic breaths. "This is my chance to get away. I don't have money, but I will. I can give you my TV - it's worth a few hundred dollars... I should have left a long time ago." It was the first time they offered to do a move for free, but that offer would prove to be the first of many.

Make a Commitment
Both full-time students and members of their school wrestling team, Aaron and Evan used their spare time to carry out moves in their California hometown. For every hundred or so moves, there would be one caller, panicked in tone, desperate to leave.

A few years in, they were packing a woman's belongings when her husband unexpectedly returned home. He became aggressive and confrontational. A toaster oven was thrown. The police were called. And the team recognized firsthand the risks for everyone involved. Though frightened, they began exploring methods for ensuring everyone's safety, and agreed that such moves would be prioritized above paying customers, when necessary.

"We didn't anticipate such a need for victims of domestic violence to flee their relationships, but with every move, we recognize we're potentially saving a life."

Establish Partnerships
Aaron engaged a local shelter and explained what they were looking to do. Together, they outlined responsibilities, drew up a memorandum of understanding, and implemented comprehensive trainings. These ensured Meathead Movers would act in a safe, confidential, and sensitive manner, while understanding the functions of the law.

To protect the caller's personal information and put safety precautions in place, they decided to refer requests to the shelter. There, staff would work with the client and local law enforcement to schedule and coordinate the move. Internally, Aaron appointed call center managers to field incoming calls 7 days/week.

Invest In, And Engage, Your Employees
While supporting victims of domestic violence became a core component of the business, their original mission also holds true: providing flexible income for student athletes. The company works around employees' school and athletic schedules, and even provides a gym at each of their locations.

Aaron, now 35 and one of the oldest at the company, sees it as his responsibility to learn about team members' goals, providing on-the-job experiences to help achieve them. He's proud that his employees, mostly in their late teens/early twenties, are interacting with clients, learning about domestic violence, and identifying themselves as part of the solution. He believes it will help set a trajectory of giving throughout their lifetime. 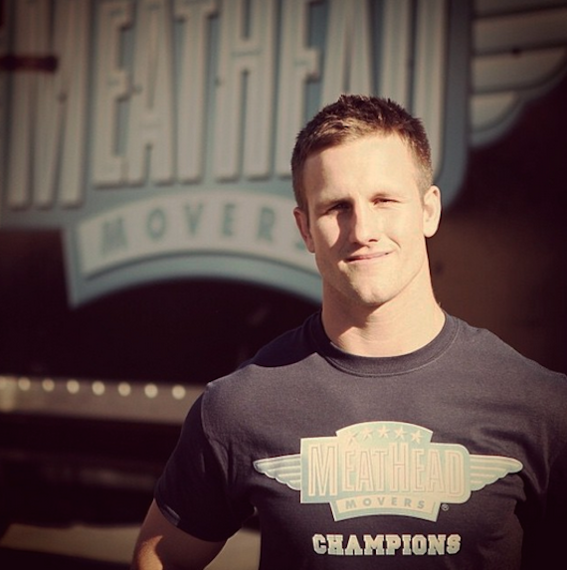 When asked about his most recent meaningful moment as CEO, Aaron replied:

"I can't think of a better one than a call from a former employee who's now at Notre Dame Law School. He was thanking me for the experience he had, and the network he had built. Since then, he's been helping me brainstorm ways we can continue to improve the company. This kid is going to go off to do great things... Knowing we are a helpful catalyst for people to get to their next stage in life... It's humbling for me."

Evolve
Meathead Movers is now the largest independent moving company in California, but with each new location they've opened, Aaron's first step has always been to knock on the door of the local shelter. Today, they have seven partner shelters on board. By next year, there will be nine. As they've grown, so have their domestic violence services. 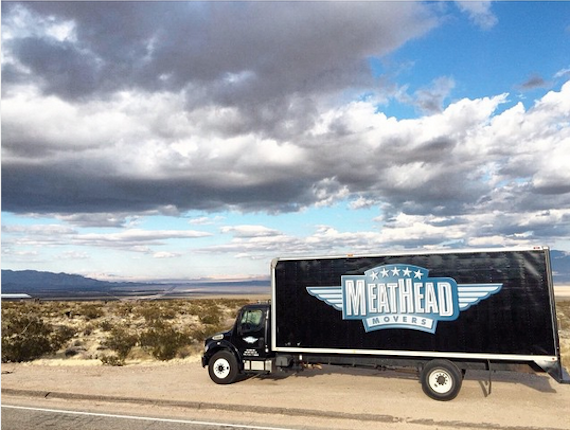 You see, while the survivor has perhaps taken the hardest step in leaving their abuser, a lot goes into rebuilding a life -- from meeting initial needs like food and shelter, to health care, counseling, long-term housing, and more. Most often, shelters incur associated costs. To help, Aaron has incorporated a $12-$20K discretionary donation to each of his partner shelters.

Aaron and his team also ensure their paid moves are making an impact. For every box they pack, they donate $1 to charity. At the close of each move, clients receive an email explaining the donation made on their behalf. Funds go towards the company's "Cinderella Fund" before being distributed as grants to local children whose families have encountered recent hardships. To date, they've donated close to $85K.

Scale
When Meathead Movers first received national press, they realized they had a big opportunity: to expand support for those in dangerous situations at home. They started a campaign, #MovetoEndDV, with a goal of inspiring other companies to pledge support to local shelters. Today, there are 105 businesses on board, including realtors, financial advisors, florists, yoga studios, and more. Moving forward, this is their focus. Aaron wants #MovetoEndDV to be a model for how businesses can integrate impact into their existing operations.

About the Financials
Running your own business isn't easy. Aaron can remember three times in the past eighteen years when the company could have folded, but "what kept us going was the passion behind providing support to individuals facing domestic violence, and helping our student athletes get jobs, because I know what a struggle that is. The fact that we offer these services is part of the passion and purpose we called upon to help get through those hard times."

And while profit was the furthest thing from Aaron's mind when he answered that first call, his programs have been a strong contributor to the company's growth. Today, they've been listed as an Inc. 5000 fastest growing company for four consecutive years, and are the largest independent moving company in California -- even adding mini storage units as a secondary business. When discussing this success, Aaron says, "If you look at business on the most basic of levels, it's about two things: people wanting to work with you and people wanting to work for you. When you do something that's important for society, quantifiable, and easy to understand, it's going to put a turbocharger on the significance of your business, and people are going to want to be aligned with that. I think a big part is having the faith that if you do right by people, you do right by the community, it will come back to you."