We all have stumbled upon many celebrity social media profiles. Some are obnoxious while others are brilliant. Why is that? Is it because we dislike the celebrity's character or their online image? Truth is, a great social media page can change our opinion about a celebrity and that's the reason public figures should pay attention to the way their social media pages are run.
Are you a celebrity? Do you want to act like one? Adhere to the following rules and I promise you will be crowned a social media champion.

Rule no 1: Don't be boring.
If you are a celebrity with a strong offline brand power but with a small online following, something's wrong. Most likely your content is dull. I don't know if you or your team run your social media accounts but you need to step up your game. Pictures of your new expensive kitchen table are not going to cut it. We can't relate to that. We need celebrity-y things in our timeline. Show us the inside of your trailer on set. Take us a backstage tour. Facebook Mentions is amazing for that. Dwayne Johnson livestreamed his best red carpet moments for his movie San Andreas.

Rule no 2: Engage. Engage. Engage.
Social media is supposed to be about creating mutual relationships. Don't be that celebrity who treats their fans like they're beneath them. We want to feel as human beings. If you want to wow your audience, you need to create the illusion that there is no distance between you and them. So play your cards wisely. If you're a terrible cook, tell us about your burned scrambled eggs. If you spilled your coffee on your director's jacket, tweet about it. Be fun. Be relatable. It worked for Jennifer Lawrence. Don't be Gwyneth Paltrow.

Mindy Kaling knows how it's done with a powerful following of 5 million in Twitter.

Rule no 3: Make your fans feel special.
If you don't give any value to your audience during your social media run, then you need to understand you are never going to maximize your internet potential. Most importantly, you need to do something about it. Reblog posts from your fans in Tumblr, like Taylor Swift. Answer fan questions on Periscope like Jose Bautista. And don't forget the little things; Reply to a few tweets every week. "Like" a couple of comments below your Facebook posts. Send some love to your talented fans who drew a picture of you and uploaded it on Instagram.

Katey Sagal and Guns N' Roses feature their fans' work regularly as a tribute to them. 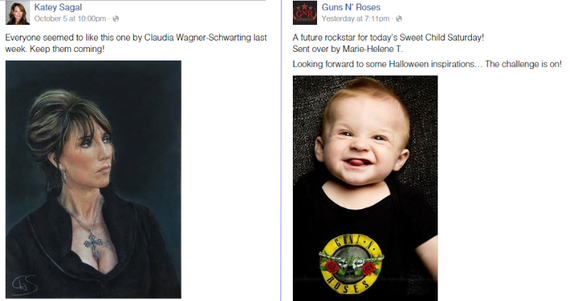 Rule no 4: Use scheduled posts. But there's a catch.
Unlike us, mortals, your life is in the public eye. If you're attending a gala or an awards ceremony, do not post a scheduled post while you're there (specially if it's being streamed online). That's just common sense. You're not going to fool anyone. You can't be posing for pictures and tweeting at the same time. Learn your lesson by Paris Hilton, who tweeted she was "In bed watching Family Guy" shortly after she was arrested on cocaine charges. You can only get away with it if your team posts on your behalf and doesn't pretend to be you. Leonardo DiCaprio's twitter account is openly moderated by his team most of the time. You can see that they make that clear (as they should be) and refer to Leonardo in third person.

Rule no 5: It's better to post selfies than being massively opinionated.
Be neutral. Nothing good is going to come out of your political or religious beliefs. I'm not saying that you are not supposed to have an opinion but don't use your social media channels to convert people to Buddhism. People on social media are brutal and they WILL come after you. A recent example is Nancy Lee Grahn's hate-tweet after Viola Davis' acceptance speech at Emmys. "I wish I loved #ViolaDavis Speech", wrote Grahn, who is best known for her portrayal as Alexis Cassadine on General Hospital, "But I thought she should have let @shondarhimes write it". Grahn felt the wrath of the internet and apologized later but you can't fix a broken glass. Besides, you don't want to send your publicist to the hospital for recurring panic attacks, do you? Be the cool guy and spread positivity.

Rule no 6: Don't shove your projects down our throats.
Who doesn't hate the celebrity-spam accounts? Talk about lack of creativity. "Hey guys, check out my new online store" or "Buy my new book for 20% off! right now" are all bad advertising. We know that 99% of celebrities (and frankly everyone else) use social media to promote themselves. There is no shame in that. But let's get innovative here. You want to sell your movie? Don't let your team flood my timeline with spam posts. I will "unlike" your page and I will not regret it. Do it like the king of social media, the guy who knows how to sell himself better than Martha Stewart; Robert Downey Jr. 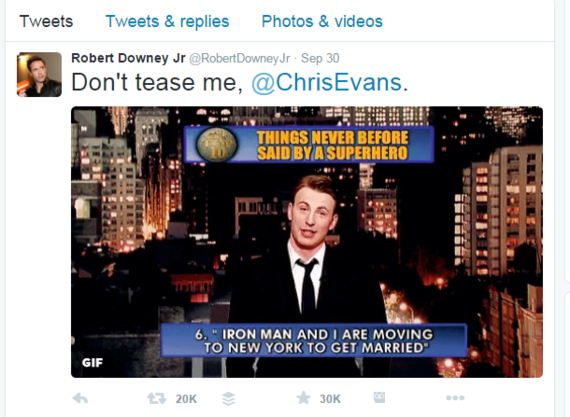 Credit: Twitter
He is brilliant at promoting his projects in a way that's extremely entertaining. I smile everytime I see his posts in my timeline because I know what I am about to read is going to be fun and clever.

Another interesting approach is to make your fans promote your projects for you. You will be left sipping your martinis while they are doing all the work and loving it. Ask them to wear an avatar promoting your new album. Start a campaign where they get to spread the word about you in exchange for some prizes. There are so many different ways to do this.

Rule no 7: Be consistent. Post regularly.
If you remember the existence of your social media profiles every Christmas, just delete them altogether. They look horrible. Take Beyoncé's twitter profile. She hasn't posted anything since 2013 and her following count is just over 14 million. When we compare her with other contemporary pop artists like Rihanna, Katy Perry & Lady Gaga, she is left behind by lots of millions. Beyoncé's lack of social media representation might not be affecting her directly, but this only works because she is Beyoncé.

This is just a taste of the essential how-to guide of celebrity social media management. You don't have to be an A-lister to apply some of these rules to your social streams. Be creative and persistent. It will come to you. If you are part of a PR team, please take some notes and you will see a big difference. If you are a celebrity (or a contact short of it), reconsider your techniques. Trust me, it works.