Have you ever tried to write a novel? Yes? Then you know what soul-crushing despair looks like: you, sitting by yourself, in front of a blinking cursor.

Now imagine trying to write a novel as a teenager. Could you motivate yourself to finish an entire book at that age? To most, the prospect seems impossible.

But in 2009, as part of the first Unschool Adventures Writing Retreat, we brought 15 teenagers to a beach house in Oregon for a month and watched each of them write 50,000 words of original fiction.

We ran it again in Colorado with 20 teens. Then on Cape Cod with 25 teens. Every year, the teens -- passionate but largely untrained amateurs -- continued to write volumes.

What was the trick? Did we intensively coach the teens or closely monitor their daily word counts? Did we outlaw non-writing-related socializing, make them go to bed early to ensure sufficient rest, require attendance at all workshops and group activities, or use some more complex trick to motivate them to work toward their challenging goals?

We did none of these things.

The secret to the success of the Writing Retreat, I believe, was that we created a place for our writers to work alone, together. 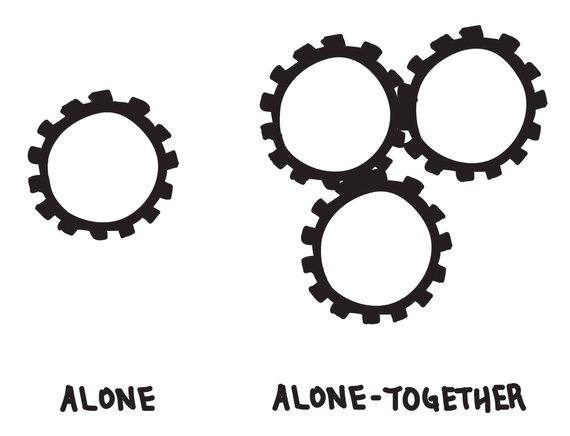 Here's a little slice of life at the Writing Retreat. Imagine waking up in a bunk bed to the smell of toasting bagels, stumbling into a common area and seeing four people typing dutifully on their laptops. What seems like the logical thing to do? Start writing.

But let's say you don't. Instead, you to opt to take a walk on the beach. Passing by the local coffee shop on the way back, you run into two more fellow students, each writing. What seems like the logical thing to do? Write.

Or maybe you don't. Instead, you return to the house, where you find a "power hour" underway, a fun challenge to see who can write the most words in an hour. Or a writing workshop about plot lines. Or a casual conversation about character development. What do you do next? Well, you probably start writing.

At the Writing Retreat, no matter where you go, some form of writing is happening. People are working on their individual books, but they're doing it together. In this kind of culture, writing is simply what you do. It's as natural as breathing.

Then, suddenly, it's the end of the month, and you've written 50,000 words, but with far less pain and suffering than if you'd attempted it on your own.

Self-directed learners often find themselves facing solitary challenges, simply because they're not doing the same thing as everyone else. Then they give themselves a hard time for not feeling motivated.

But self-directed learning isn't about doing everything by yourself. Putting yourself in the right atmosphere, with people who share your interests and with the right amount of structure, can make all the difference.

When the challenge of individual work feels overwhelming, join a community of people facing the same challenge.

Humans are pack creatures. If you put us in solitary confinement we go insane. This is generally true even for introverted people; only on the far edge of the bell curve do you find people who crave absolute solitude for weeks or months on end (and these people tend to be really odd, and it's often hard to tell if the oddness is cause or effect).

However . . . being surrounded by a bunch of people that is constantly interrupting you makes it hard to focus. And so civic design has evolved the library, the coffee shop and the co-working space: Places where you can be alone yet also surrounded by people.

The secret is to surround yourself with people who don't have the same agenda as you. Then you won't often be interrupted by things that break your focus: The staff might occasionally ask to refill your coffee, and you'll get interrupted if the building catches fire, but otherwise you can work on your own thing.

This is an excerpt from The Art of Self-Directed Learning by Blake Boles. The original chapter is titled "Alone, Together". Illustration by Shona Warwick-Smith.

The original Writing Retreat was inspired by NaNoWriMo.