In part 1 and part 2 of this series, I talked about the power of choosing a good angle. Now, we'll look at how to put that angle to use, via what I call The One Point Rule:

In any one communication, you can only make one point.

Count on people forgetting everything else. That's because our minds throw away almost all new information -- by necessity, since we wouldn't be able to tote brains big enough to store a day's worth. Even the seven digits of a (US) phone number are hard to learn, requiring that we repeat them over and over to get them out of short term memory and into the long term version.*

This is why a good angle -- a simple, emotionally compelling idea -- is so important: if people are only going to remember one thing (and they are), you want it to be the right thing.

So, right now, stop making lists of topics when you plan a piece of writing. No more trying to say lots of things.

Say one thing, and a few other things that support it.**

As my pal Zach Friend recommends in his book On Message, you can use a "message box" to organize your thinking. Write your core point (your angle) in the middle and surround it with three to four supporting points: 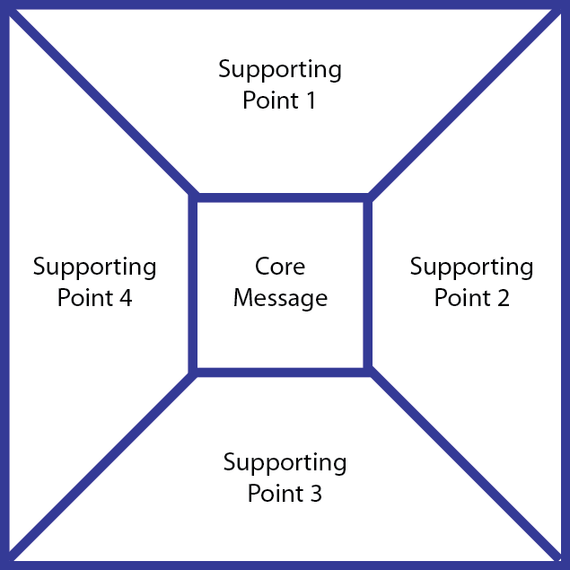 If you organize your thoughts like this, everything you write either will be, or will point to, the most important thing you want people to remember. So they probably will. They'll be more likely to remember some of the other stuff too, since it all will be related.

As a big bonus, this practice makes it much more likely that your piece will be pleasing to read, because all the parts will fit into a coherent order -- an essential quality of good writing, or of anything that's well crafted. The angle acts like the DNA that makes a tree a tree, no matter how many branches and leaves it may have.

Would you like an example of the One Point rule in action? You'll find them all over, but you can start right here: The One Point behind the piece you just finished reading is, of course, that you can only make one point.

* The reason phone numbers have seven digits is explained in an often-cited 1956 paper called The Magical Number Seven, Plus or Minus Two, by psychologist George Miller.

** Sometimes, of course, you're forced to cover lots of topics, such as in a comprehensive report or presentation. In those cases, break the content into modules (this is why books have chapters), and apply the One Point Rule to each one.