So far in this series, I've been offering tips that can be used right away, by just about anyone who writes.

But now we come to something that can require significant time and dedication: finding your voice as a writer. The good news is you can start making progress today. 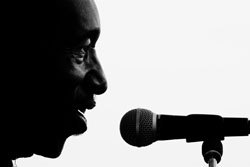 What is does it mean to have a voice? It's the way people know you're you and no one else -- as if they were speaking with you in person.

It matters, because when people can't get a feel for who you are, they're likely to move on to someone more interesting.

Here's an example of the impact of a strong voice, from a recent New York Times Magazine piece, "The Troll Goal: On Danny DeVito's Twitter:"

Let's just get this out of the way: You love his work. For people my age, Danny DeVito -- beloved character actor, accomplished producer and petite human man -- hit his apogee of cultural saturation with Tina Fey's 2004 movie "Mean Girls," in which a zaftig woman is ridiculed for looking like DeVito. Even now, I can barely mention DeVito's name - you'd be surprised how often he comes up -- without inspiring a recitation of the line, because everyone I know is 25 and an idiot. (Which, fine: It's a good joke. A clever joke! A good, clever, 11-year-old joke.)

If I ever run into Jazmine Hughes, the writer of this item, I expect I'll feel like we've already met.

Here's a very different voice. It's from a Sidney Award-winning Vanity Fair article by war correspondent Sebastian Junger, "How PTSD Became a Problem Far Beyond the Battlefield:"

I stood there with my back to the column [on a subway platform] until I couldn't take it anymore, and then I sprinted for the exit and walked home. I had no idea that what I'd just experienced had anything to do with combat; I just thought I was going crazy. For the next several months I kept having panic attacks whenever I was in a small place with too many people--airplanes, ski gondolas, crowded bars. Gradually the incidents stopped, and I didn't think about them again until I found myself talking to a woman at a picnic who worked as a psychotherapist. She asked whether I'd been affected by my war experiences, and I said no, I didn't think so. But for some reason I described my puzzling panic attack in the subway. "That's called post-traumatic stress disorder," she said. "You'll be hearing a lot more about that in the next few years."

As different as these two voices are -- one chatty and fun, the other restrained but harrowing -- they have one crucial quality in common.

Both reveal the writer -- in all her and his vulnerability.

But here's the trouble for less confident writers: they've learned not to let that happen. Like most people, they've been taught since childhood that the reward for standing out may be shame.

That's why finding one's voice is so hard -- it's been lost for so long.

Great writers often spend years getting it back. In part, they do that by mastering the elements of language -- syntax, rhythm, diction, sound -- often working at a very subtle level.

But more importantly, they do it by being honest. The best thing about good writing is that it's true.

That often means that it's surprising, uncomfortable, sad, or funny -- all feelings that are associated with recognition of truth. And, as it happens, they're feelings that make people want to read your stuff.

To develop your voice, try these four steps:

Look again at Hughes' line, "Which, fine: It's a good joke." That sounds like someone speaking, not someone self-consciously "being a writer."

And so too when Junger writes, "I stood there with my back to the column until I couldn't take it anymore, and then I sprinted for the exit and walked home." He's simply remembering, and telling, exactly how he felt and what he did, down to the small but powerful detail that he sprinted away from the crowd and then walked when he was alone.

Part 1: Creating Content Driving You Crazy? Here's How to Write

Both Fast and Well
Part 2: Know What the Heck You Mean
Part 3: The 'One Point Rule'
Part 4: Flip Your Pyramid
Part 5: An Ancient Lesson in Three Acts
Part 6: The Case of the Murdered Modifiers
Part 7: Get Physical
Part 8: Block that Metaphor!
Part 9: Why Clichs Are Evil
Part 10: Get Rhythm