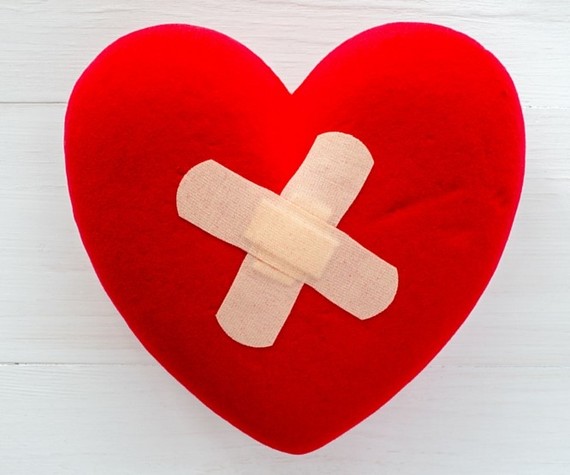 If you were a child of the '90s, you remember the scene. Tom Cruise's Jerry Maguire comes bursting into the house to interrupt the at-home women's meeting that Renee Zellweger was holding. Through tears, he professes his love and utters the iconic line, "You complete me."

Now if I were Renee's life coach, I would have urged her to not take the bait, as that kind of a statement is typically a death sentence for any relationship. Rather than get enmeshed in Jerry's dysfunction, I would advise her that it's both unhealthy and unfair for Jerry to outsource his happiness to her and it will only cause feelings of resentment for them both when she can't live up to his wildly unrealistic expectations. After all, she already has enough on her plate taking care of herself and her son without having to worry about if she's doing enough to "complete" Jerry on an ongoing basis.

Yep. This would be a really mature, spiritual way for her character to handle the situation.

Instead, through tears, she looks at him and says, "You had me at hello."

As an adolescent, you watched this scene unfold and probably said to yourself, "God, I wish I could find a love like THAT." Thus, in that moment, Tom Cruise ruined your relationship expectations.

In his defense, the '90s were like that. We romanticized the idea of "two people becoming on." In fact, there was even a Spice Girls song with a title to that effect.

But if you still find that idea romantic in 2016, you are forever setting yourself up for disappointment.

To look for a partner to "complete you" is to infer that you are incomplete as you are. Thus, the energy that you bring to the relationship from the beginning is that of neediness and lack. If you need your partner's approval to fill a void in your life, what happens when they don't return your text in a timely manner? You get triggered and blame them for "not communicating."

The thinking of the world tells us that the ideal romantic relationship equation is ½ + ½ = 1 whole person.

The reality is that two incomplete people just make an incomplete relationship, where our triggers cause conflict and pain, and neither partner will be equipped to deal with it. And as we all know, your wounds WILL get triggered in a relationship, because as luck would have it, we are drawn to the people who are our opposite energy.

So here's what I tell clients. The best equation is actually 1+1=2.

This isn't to say that the members of a relationship shouldn't merge to become an integrated unit. It means that two complete people, who deeply and unconditionally love themselves, won't commit for the sake of filling a void. They choose to enter into a commitment because they are two strong, happy individuals whose high level of self-love makes them more fully present and better able to support each other. They help each other heal. Two whole people create a bigger sum total than two people who are only living as fractions of their authentic selves.

So whether you are single or in a relationship that's hit a rough patch, how do you know what energy you are bringing to the table? Perhaps the biggest way to tell is by asking, "How Much Do I Blame Others?"

Unless you are in a situation where you are the victim of abuse, in which case you should leave immediately, blaming is a sure sign that you aren't being honest with yourself. One of my favorite quotes about relationships comes from Mastin Kipp, who points out, "There is no one person who is sick and one who is well. You are both sick. You are both well. You need to take responsibility for your side of the street."

So what is the story you tell yourself about your relationship? Is it, "My partner is great except for this list of 12 things that they need to change"? Instead of pointing the finger, ask yourself if there is a bigger spiritual lesson to learn?

If you are frustrated that you seem to be giving too much in the relationship, ask yourself if you need to learn to set better boundaries, love yourself, and take time for you?

Are you annoyed by your partner constantly saying that you aren't being open with your feelings? Maybe it's time for you to learn to be more vulnerable in relationships.

Of course, the other option is to vilify them, blame them for the problems, and then break up. While the new relationship will be with a different person, the old dynamic will eventually resurface. The universe has a way of presenting the same situation to you over and over until you learn and grow.

Relationships aren't about being right, they are about growing into your authentic self. Once you can heal, you can be complete. You know, without dating Jerry Maguire.

Do you find yourself struggling in your romantic life? I'm offering a FREE, 25- minute, "Discover Your Strengths" Coaching Session to the first 5 HuffPost Readers who email me at Dan@Creativesoulcoaching.net

Want to learn how to manifest more love, a better job, or more money in 2016? Sign up for my free "Download Your Dreams" teleseminar. Space is limited so sign up now!

More:
blameGPS For The Soulself improvementSpiritual DevelopmentLove and Relationships
Newsletter Sign Up
An essential daily guide to achieving the good life
Subscribe to our lifestyle email.
Successfully Subscribed!
Realness delivered to your inbox