Tomorrow night, "The Simpsons" kicks off its 27th season on Fox with an episode entitled "Every Man's Dream."

Coincidentally, West Coast-based fans of this animated Fox animated comedy have been dreaming for decades now about getting the chance to visit Springfield (i.e., that hyper-detailed burg that Bart, Lisa, Maggie, Marge and Homer call home). Maybe do a little shopping at the Kwik-E-Mart. Grab a Ribwich at Krusty Burger. Or -- better yet -- drop by Lard Lad and treat themselves to a giant pink donut. 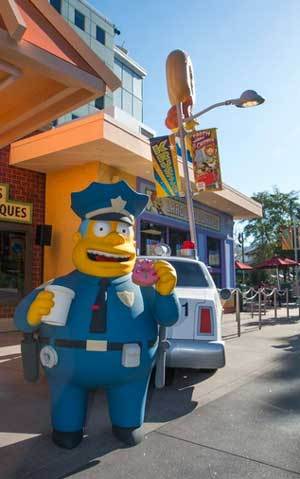 Well, that dream became a reality back on April 2nd of this year when Springfield officially opened at Universal Studios Hollywood. Located just steps away from that theme park's award-winning "The Simpsons Ride," this highly immersive environment lovingly recreates the hometown of America's favorite animated family. Right down to the tin ceiling at Moe's Tavern & the real harlequin glass that was used to create the front window at Homer's favorite watering hole.

Given the overwhelmingly positive response that this recent addition to the Upper Lot has gotten, you'd think that the folks at USH would leave well enough alone. Concentrate their efforts on completing Springfield's next door neighbor (i.e., The still-under-construction Southern Californian version of The Wizarding World of Harry Potter. Which is due to open sometime next Spring). 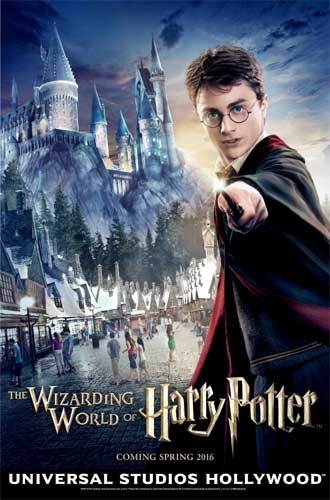 Well, think again. Even though it's nearly been six months since Springfield threw open its doors, Universal Creative continues to tweak this part of their Hollywood theme park. Finding ever more ways to make this portion of the Upper Lot a must-see for Simpson fans.

"We've continued to add a lot of highly detailed, very personal and authentic bits to the environment of Springfield to make it seem that much more special," said Jon Corfino, a Senior Director and Executive Producer at Universal Creative. "Take -- for example -- what we've done with the upstairs dining room at Krusty Burger. This area is known as Krusty's Commissary because it's supposed to be where the employees of Krustylu Studios go to have lunch. Well, we've continued to grow & evolve the look of this part of that restaurant since Springfield first opened. And if you were to visit Krusty's Commissary today, you'd see that this dining room is now much more decorated out. We've added graphics to the walls that were actually created by many of the animators who work on 'The Simpsons.' So where there just used to a lot of great props that celebrated Krusty's career & personal life, you've now got all of this additional art that's very reminiscent of what people see at Sardi's. Which now makes the upstairs dining area at Krusty Burger seem like a legitimate show business environment." 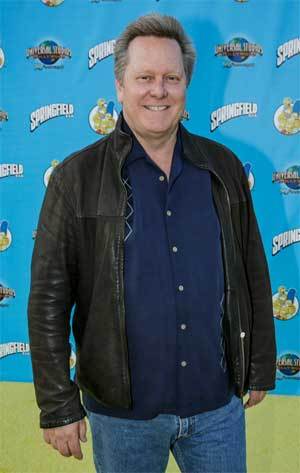 Mind you, when the world's first Simpsons-themed "land' opened at the Universal Orlando Resort back in the Summer of 2013, Universal Creative piled on the detail. But when it came time for Springfield to travel west, Corfino & his team knew that they really had to step up their game. 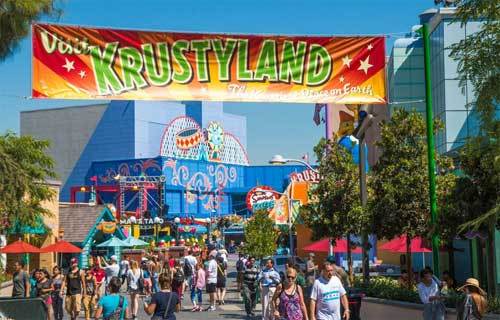 So to give Universal Studios Hollywood visitors lots more to look at during their three trips through this part of that theme park, Corfino & Co. decided to build up. Creating 24 multi-level building facades (14 of which are all-new & unique to USH) that are just loaded with Springfield-specific iconography. So when Simpsons fans repeatedly wander through this area, they then get to see buildings that they know & love from this long-running TV show. Everything from Burns Manor to Springfield Elementary School to the "Springfield" sign with its 40 foot-tall letters.

And the best part of building up is that the second floor of Springfield (which is where the dining rooms for Krusty Burger and Cletus's Chicken Shack are located) effectively acts as a berm for this part of the theme park. Which means that the West Coast version of The Wizarding World of Harry Potter (which is being built right behind these two quick service restaurants) won't then visually intrude in this section of Universal Studios Hollywood & visa versus. 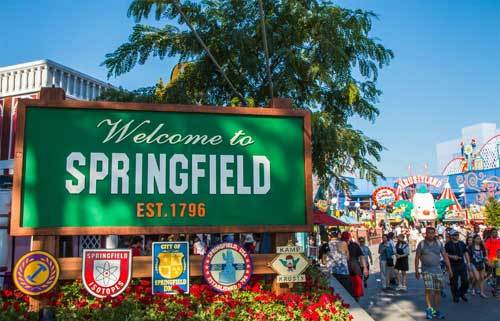 "And we've continued to work on improving Springfield's sightlines. So as part of our continued plussing of this side of the theme park, we've just put up a brand-new city sign as well as several banners. This means when our guests are standing in this land's sweet spots -- which are right in front of Krusty's and right in front of Moe's -- you can't really see anything but Springfield," Jon stated.

Which clearly pleases the folks who work at Gracie Films (i.e., that production company which makes "The Simpsons" for Fox). "And how do I know this?," you ask. Well, this past Thursday, where did the writers & the animators opt to hold their premiere party for the 27th season? 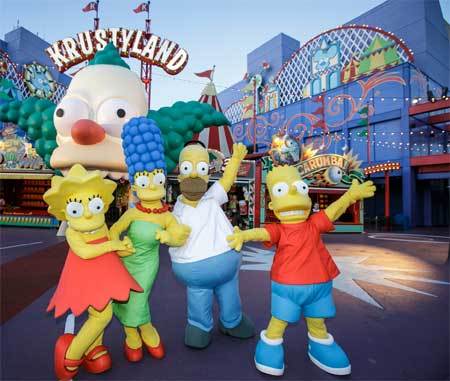 You guessed it. After-hours at Universal Studios Hollywood right inside of the Springfield section of that theme park. Where -- if they so desired -- these Fox / Gracie Films employees could wash down a Clogger with a sip of Buzz Cola. Or -- better yet -- toast their co-workers with a Flaming Moe before then getting their picture taken in front of a topiary version of the Seven Duffs. 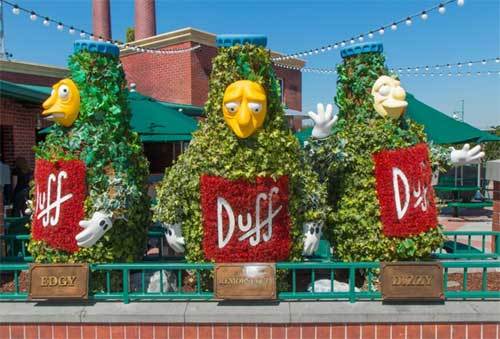 And the best part was -- from where these writers & animators were standing in front of Edgy, Remorseful and Dizzy -- they couldn't see Hogsmeade Village & Hogwarts Castle at all. As far as they were concerned, Harry Potter & his pals were far off in the Scottish Highlands. Whereas the "Simpsons" production team was partying right in the heart of beautiful downtown Springfield. 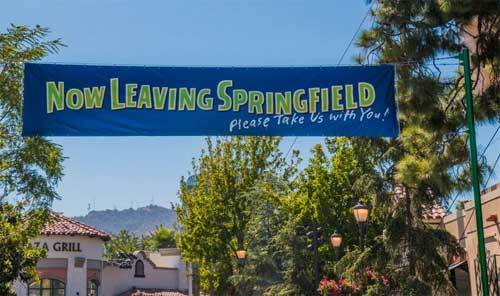