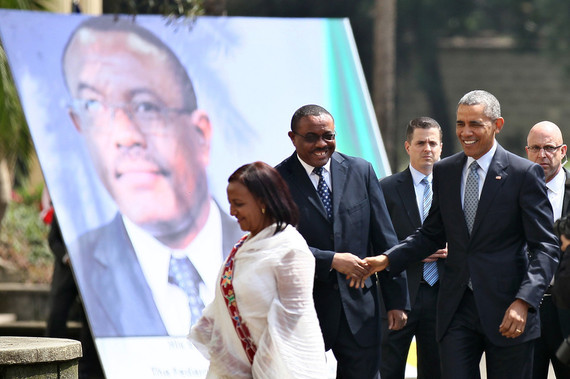 US official development assistance is focused significantly in three regions - Asia, Europe and sub-Saharan Africa. Between 1980 and 2012 a significant portion of its official development assistance went to Asia, US$205 billion, followed by Europe with $200 billion and $120 billion to sub-Saharan Africa. This is based on calculations from the Organisation of Economic Cooperation and Development's online credit reporting system database.

In Africa for more than 30 years - from 1980 to 2012 - Sudan, Ethiopia, Kenya and the Democratic Republic of Congo were the highest recipients of US aid.

What drives US aid decisions

US foreign aid has generally been motivated by political, economic and altruistic factors, with the objective of promoting economic growth. This includes poverty reduction, improving governance and increasing access to basic education and health care.

US aid to sub-Saharan Africa increased by 2,661%, from $211 million to $5.6 billion, between 1960 and 2006. This accounted for a 17-fold increase in the proportion of aid in its budget. The US also contributes to multilateral agencies including the World Bank, the African Development Bank and the International Monetary Fund. US aid is predominantly concentrated in the health and education sectors of many sub-Saharan African countries. It is for this reason that in recent years the US's aid allocation has been questioned, particularly its alignment with the needs of recipient countries.

Between 1995 and 2013 about $97.67 billion in foreign aid was committed to sub-Saharan Africa. Social infrastructure and services aid (48% of total aid) and humanitarian aid (26%) were the priorities. Of this:

Before and after China's arrival

Some useful insights can be gleaned from looking at the US's aid allocations in two distinct periods. This is before (1980 to 1999) and after (2000 to 2012) China's involvement. It provides some answers as to whether China's emergence as a major player on the African continent altered the way in which the US allocates aid.

Due to data availability, the beginning of China's involvement in foreign aid in sub-Saharan Africa is considered in the study as the year 2000.

Pre-China a vast amount of US foreign aid was destined to the conflict countries of Sudan, Somalia and Ethiopia. After China's entry, Nigeria, Uganda, Tanzania and South Africa became part of the destination for a significant amount of US aid.

Of the four, South Africa and Nigeria have arguably the largest economies on the continent. They are driven by natural resource exports as well as growth and innovation in other sectors like banking and services. Tanzania and Uganda are two of the fastest-growing economies in East Africa.

Before China's entry, both donor interest and recipient need were equally factored into the US's aid decisions. This is based on looking at the determinants of US aid allocation to 31 sub-Saharan African countries.

After China's entry, recipient need became a more prominent factor than donor interest. This shows that China's increasing importance in Africa seems to have reduced the space within which the US can play a role in terms of its economic and political strength on the continent. This "squeezing out" of the US may have resulted in a shift in US foreign aid focus towards the "needs" aspects of foreign aid.

In the past decade the US's foreign aid focus has shifted to the socioeconomic sectors of recipient countries. This shift has particularly been visible in the social sectors. More aid is being focused on health and education and less directly on the productive sectors of recipients. It is difficult to determine whether these changes in US aid allocation to sub-Sahara Africa can be credited solely to China's entry into the region, but the empirical evidence points to a shift in US aid allocation determinants between pre- and post-China periods.

This is an extract from a working paper titled "The political and economic dynamics of foreign aid: A case study of United States and Chinese aid to Sub-Sahara Africa". The paper is authored by Kafayat Amusa, Nara Monkam and Nicola Viegi.