You can smell the male teenage testosterone long before you witness it in action at any ski resort terrain park. Rich white boys dressed in branded gear make hand gestures once reserved for gangs in the ghetto now adopted by the snow fraternity.

They high five, skin slap and verbally whoop as their mates up the ski and snowboard ante, egging each other on to bigger and better tricks. If something is cool, it's dope; if it's uncool, it's gay.

The urban dictionary defines "gay" as "often used to describe something stupid or unfortunate. originating from homophobia. quite preferable among many teenage males in order to buff up their 'masculinity'."

Which is why 24-year-old freeskiing legend, Telluride hero, and Olympic medalist, Gus Kenworthy's decision to finally come out publicly with one simple tweet promoting his in-depth interview in ESPN The Magazine's Being Out Issue is such huge news. 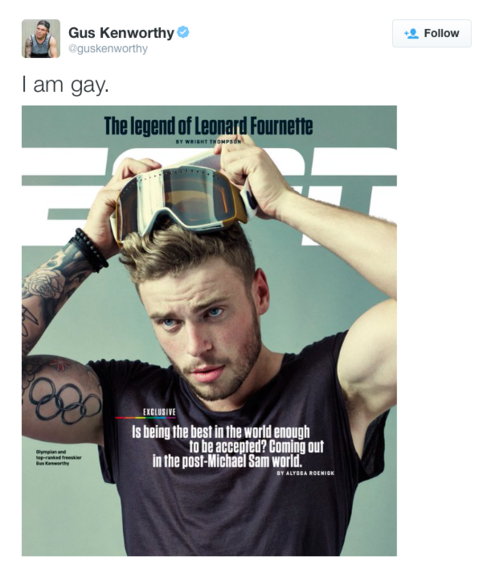 Even those who don't ski know Kenworthy. He's the all-around American, uber-talented dream with perfect teeth, rosy skin and a way on a pair of skis that has put him at the top of his chosen field - the youth-obsessed sport of slopestyle skiing. He's the American skier who rescued a bunch of stray puppies from Sochi in Russia (where he also won an Olympic silver medal) and brought them to America for a better life; and now he's the out and proud "gay" skier.

I love that Kenworthy has spoken his truth so he can live his truth without shame, and he can do this in his twenties and beyond. Australian Olympic swimming champion, Ian Thorpe, consistently denied his sexuality publicly and suffered years of depression before finally speaking out at age 31. Being a champion can be a heavy load, being a role model even heavier and each person has their own journey to coming out to live. When it's time, it's time; and for some that may never come.

Suicide is the second leading cause of death among young people aged 10 to 24 and LGBT youth are four times more likely to attempt suicide than their peers. While the ESPN article says it discusses what it means "to be an openly gay athlete in a post-acceptance world," I challenge the idea that 2016 is post-acceptance. Homophobia is still so prevalent, especially in conservative America where homosexuality is still considered by many to be a sin; and crazies like Kim Davies are prepared to go to jail to defend their right to a heterosexual-only world.

Kenworthy himself reveals in the video interview with ESPN that "if I was to die doing this (skiing) then no-one would ever have to know this dark side of me. I've been depressed, I've had anxiety, I've been suicidal."

There are few young successful gay role models for teenagers wrestling with their sexuality. For every LGBT Olympic medalist, X-Games hero, Hollywood starlet that has the courage to openly embrace themselves there are a gazillion cyber bullies to admonish them for doing so. But if a young, successful sportsman can come out in their male-dominated sports locker room then there is hope for those who feel too discriminated against to come out too.

I know that testosterone in the ski world that Kenworthy speaks of, as a female in the ski industry I have felt the oppression of it time and time again. Sexism is alive and well in an industry dominated by old-school male ways. I have written about it, then written about it again, and then again and yet again.

Being gay in the ski world is as much a choice as being female is. You either are or you are not and neither should prevent you from achieving your snow sports dreams, nor should you be shamed for it through language use, unequal prize money or body objectification by big brands. The fact that Kenworthy knew he was gay from the age of five, lives in a liberal ski town of Telluride, and is born to clearly accepting and supportive parents and still felt he could not come out until now shows that "post-acceptance" era that ESPN refers to is yet to truly exist.

Around two percent of American men (willing to admit it) identify as homosexual so chances are Gus Kenworthy is not alone on that podium level. If his coming out inspires one other athlete to do the same then fantastic, if his willingness to live his true authentic life on the world stage inspires one LGBT teen to remain alive and accept themselves as they are too then bloody brilliant.

If his sports prowess and integrity make testosterone-fuelled teen boys question the term "gay" as derogatory then that is another step towards the acceptance that we all aspire too -- gay, bisexual, ethnic, geek, female, tall, short, overweight, underweight and flawed as we humanly are.