Part IX in the series based on the new report "It's All Interconnected".

First and foremost, special access is not 'special'. Special access has been a category of 'access lines' -- pretty much any business-class data broadband line with a speed of over 1.5 Mbps in both directions, though there are 'heavy duty' business-class services used by the wireless and phone companies, including competitive wireless providers like Sprint or T-Mobley. However, these wires are hidden networks, and according to most sources they have exceptionally high profits as they are monopoly products offered by the incumbent phone companies, AT&T, Verizon and Centurylink.

And there are three components: a) the actual wired lines and b) the costs to handle the data, video, and wireless calls and traffic that travel over these wires, and c) billings and collections and other obscure telecom-Internet business to business services.

While I've written previous articles about special access, with the uncovering of new data (and with the help of other analysts and auditors) it is now clear that the problems are worse than previously imagined as the revenues and profits involved are 2-6 times larger than others have been quoting.

As you will read, these access lines appear to be classified as 'telecommunications', "Title II", and basic rate phone customers have paid a disproportionate amount of the expenses. Meanwhile, Verizon's own affiliates are getting large financial advantages over any competitors, and there is a large bucket of special access revenues that appear to not pay any construction budgets and are part of the "Black Hole" revenues, as we outlined elsewhere.

According to the FCC:

And according to most sources, AT&T, Verizon and Centurylink control an estimated 80 to 90 percent of the market in their own territories, though it varies by location. And because of this monopoly, the profits are estimated to be over 100% of the costs. This is one of the reasons that America's broadband is expensive or your cellphone service has data caps.

Think of it like the gas in your car. Special access is the gas of the Internet; the more expensive it gets, the less you get to travel, and at slower speeds, and the more you have to pay or the more the competitors and companies who offer your service have to pay the phone company. 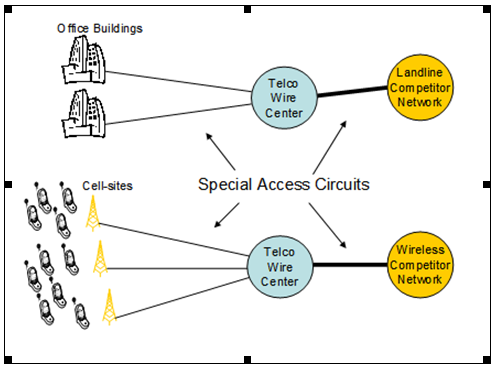 Manipulating the Accounting of Total Lines in Service -- No Info about Special Access.

Again, Special access is a hidden network and here's a simple example. Below is the full accounting of 'access lines' in New York State from the FCC for the year 2007. It shows that special access lines eclipsed regular phone lines long ago, and the regular "POTS", (plain old telephone service) access lines (also called "switched access") accounts for only 15% of total lines. And while there are 'accounting issues' for special access lines (too technical for a discussion here), the accounting has been erased as the FCC stopped publishing the information in 2007 and no state bothers to collect basic information. 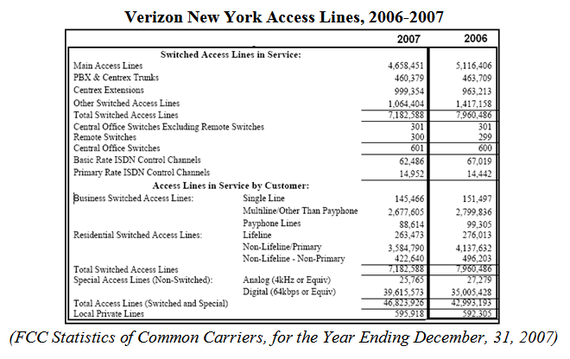 DATA WARNING: The 'declining access lines' we all hear about are really the 'switched' lines and NOT special access and the decline has been a shell game to move basic phone lines into the 'data' category or change them into 'Internet Protocol' to reclassify the exact same wire into one of the 'uncountable' lines. So, in 2007, Verizon New York was claiming it had 7.2 million lines, while the actual total lines-in-service in New York was 47 million lines.

AT&T Says "Go Eat Some Cake" to Competitors and Businesses over Special-A.

Why now? In October 2013 AT&T decided that because "special access" is a monopoly service and because the company is closing down the "old networks" and going to Internet protocols (IP), where there are no regulations or requirements, the company can simply raise rates or start phasing out long-term contracts to competitors. And at some point in the future, since they control special access (the price of gas) as well as the use of the wireline broadband, Internet, phone cable and even the wireless networks, they'll just get rid of those other pesky competitor companies -- wireline, broadband or wireless.

To demonstrate the arrogance, AT&T sent this letter (excerpt) to their business customers and competitors using these networks:

After an outcry by companies whose business depends on these services, from Sprint to Earthlink (the link includes the AT&T letter), the FCC stepped in to halt AT&T's plans and started an investigation at the end of 2013. And it's about time, since the last data collected by the FCC was in 2007.
Grandma, Low Income Families and POTS Customers Are Funding Special Access Line Deployment.

Let's go back to the financials we highlighted in a previous article on affiliate transactions, which are the flows of money between Verizon New York and the affiliate companies, (Verizon's subsidiaries) from Verizon Online or Verizon Business to Verizon Wireless. 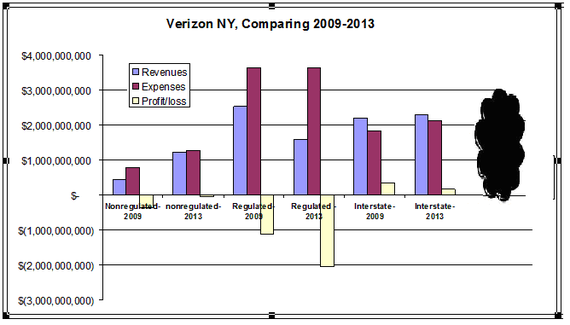 Using the data from Verizon New York's own financials we uncovered that special access is special in that it is getting a free ride like the cable TV, broadband and Internet affiliate services.

For the year 2013, we found that local service has been paying a disproportionate amount of the construction budgets, based on revenues. When we examined one area called "plant specific" expenses (the wired network expenses), we found that while the regulated side had revenues of $1.6 billion, the 'plant specific' charges were $1 billion. Conversely, the 'interstate-access', (which are the 'access' revenues, including special access, defined by the FCC as 'interstate' traffic and are the fees paid for companies to use wired access services) which had $2.3 billion in revenues was paying less than ½ billion -- half of what local service was paying. (Special access accounts for 78% of the access-interstate financial bucket.)

In fact, as a percentage of revenues, local service is paying 65%, but access is paying only 22%. When one considers that copper-based local service is declining and Verizon has stated that it is no longer repairing the copper wires, then where are the plant specific expenses for local service coming from?

But here's the kicker-- what we just discussed are the special access revenues and expenses that are part of the utility regulated books.

This would mean that it is not paying construction budgets or some other expenses, and this area is profitable in and of itself (at least based on the last accounting in 2010), even though Verizon New York lost $2.2 billion in 2010 overall.

In terms of the US markets, the numbers used by others have been off by a factor of 2-6 times.

We note that almost all of the other calculations done by other analysts are based on the FCC's data, which stopped in 2007. However, the FCC NEVER included the 'black hole' revenues for special access it its "Statistics of Common Carriers" reports or "ARMIS" data.

As we discussed previously, Verizon's affiliate companies are paying a fraction of the actual costs charged to competitors. And it looks like Verizon Wireless is just like the other affiliate companies -- and is getting their wires-to-the-cell-towers dumped into the local service construction budgets, and is paying a fraction for use of the networks.

Verizon Wireless is Paying a Fraction for Services as Compared to Sprint.

The following information is in Verizon New York's SEC 2010 4th quarter filing's discussion of the access and billing and collection fees paid by Sprint/Nextel and AT&T.

"Concentrations of credit risk with respect to trade receivables, other than those from AT&T Inc. (AT&T) and Sprint Nextel Corporation (Sprint), are limited due to the large number of customers. We generated revenues from services provided to AT&T and Sprint (primarily network access and billing and collection) of $237 million and $104 million in 2010 and $279 million and $119 million in 2009, respectively."

When we examined the monies paid by Verizon Wireless for the same year, we found that for just two years, Verizon Wireless underpaid Verizon New York by $377 million dollars, as compared to what AT&T and Sprint were paying for access and billing and collections. Verizon should be paying what AT&T is paying for these services as they are about the same size while Sprint is less than ½ the size of Verizon in terms of subscribers, but was paying more.

There is no indication that VNY provided more services to AT&T and Sprint than it did to Verizon Wireless. However, we can not determine from this information, which is taken directly from the Verizon NY SEC-Report, the specific charges that constitute these payments to VNY.

While some have pointed out that the AT&T and Sprint may include other access charges for other services, Verizon Wireless should also have payments made to the wireline business for the fiber optic wires to the cell towers.

This gets rather ugly when you realize that Verizon Wireless appears to have charged POTS, Plain Old Telephone Service, customers for the special access wires to the cell towers, something that Sprint obviously isn't getting for free.

As we discussed previously, the construction budgets for Verizon New York are firmly in the regulated books. When we cross-referenced the SEC-filed financials with the PSC-regulated books there was an additional $2.7 billion in the SEC books in 2009 but the construction budgets were almost identical. And since all of the wiring in the State is 'Title II', it would appear that Verizon Wireless got a free ride on these lines. Verizon's CFO concurred as did the press releases from the company.

"The fact of the matter is Wireline capital -- and I won't get the number but it's pretty substantial -- is being spent on the Wireline side of the house to support the Wireless growth. So the IP backbone, the data transmission, fiber to the cell that is all on the Wireline books but it's all being built for the Wireless Company."

The headline of the Verizon NY press release reads:

"Verizon Invested More than $1.5 Billion in New York's Wireline Communications, IT Infrastructure in 2011."

The text states, however, that the fiber optic cell towers for wireless services are a wired product.

From the point of view of Sprint and T-Mobile, the story is clear -- they are at a massive financial disadvantage as the wires and services that they have to use -- the 'backhaul' special access wires, are not only being funded by phone customers through excess phone charges but also that Verizon Wireless appears to be paying a fraction of what they pay for critical services.

Net Neutrality is all about the control of the wires and access.