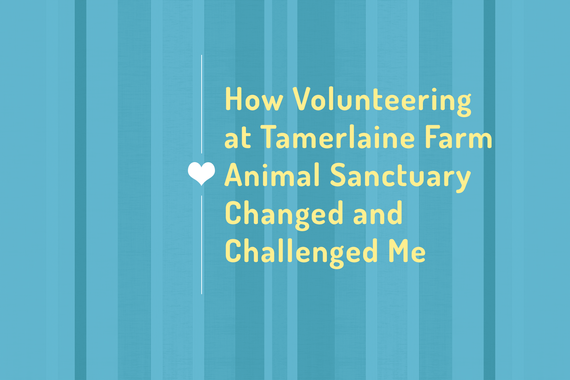 As part of my new book, I am traveling the world volunteering with non-profits in unfamiliar and challenging environments. I just finished with one of my first assignments as a volunteer at Tamerlaine Farm Animal Sanctuary in New Jersey. Whew, did I learn a lot about farm life in a very short time!

One of the reasons I am so passionate about this book is because I want to gain experiences of all different types. As humans, I think we spend too much time hanging out with people that we "like" and circumstances that make us "comfortable". I want to lead a life where I am challenged, where I am introduced to new things, and where I am sometimes forced to grow and stretch due to discomfort. I want to be a lifelong learner and understand people and situations that are foreign to me.

While at Tamerlaine Farm, I was both changed and challenged because of the experiences I had there. I want to share some of those with you today. 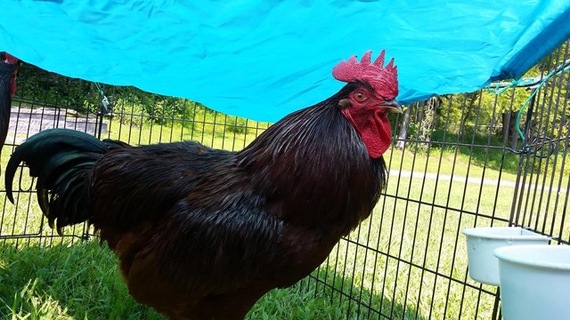 The biggest challenge while I was there was that I learned rather quickly I was scared of the roosters! Have you ever encountered a pen full of roosters? GEEZ! They circled around me and backed me into a corner every time I went into their pen. I was ganged up on! And, I swear to you, they must have sensed my fear. It didn't matter if I walked in with food, fresh water, or any other nice treat for them--they had it in for me.

Most of the time I had to do a lot of positive self-talk so that I could enter into their environment without freaking out. I was often chanting this in my mind, "Shannon, you are so much bigger than them. It's going to be okay. Breathe...breathe..." To be honest, this worked until I stepped on the other side of the fence and locked the gate. Then, 5 of the most beautifully colored roosters would trot over, circle around, and start the ceremonial routine of pushing me into the corner. If I tried to break out of the circle, and walk toward the gate, the head rooster would fly up in the air to block my only escape route! And, so, I would eventually forget the mantra I was chanting, run for the gate, and make a getaway. A few times I was rooster kicked. A few times pecked on the legs. Every time--scared! 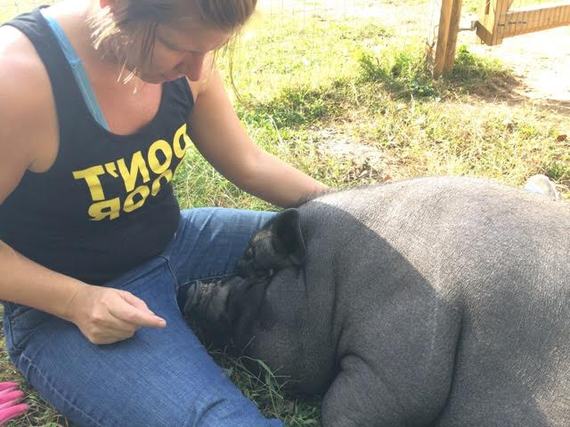 On the flip side, I fell in love with the turkeys, chickens, and pigs. Every animal on that farm had a unique personality. There were head chickens who stayed busy taking care of the flock, and chickens who would crawl into my lap to snuggle. Artie, the 250 pound pot-bellied big, was the biggest snuggler of all! When I sat on the ground, he would come over and crawl up on my legs and lay there for hours. He loved to have his belly scratched and his ears rubbed. And the turkeys? They were fascinated by the buttons on my shirts--often trying to take them off by pulling at them with their beaks. I learned rather quickly to remove my rings and earrings--because those turkeys were mischievous and anything that caught their eyes was fair game.

I am convinced it takes a special person to volunteer in the first place. Lots of people I know talk about volunteering, but often don't "get around to it". It's a commitment. It means giving up precious time with friends and family, and putting aside the things you love to do, so that you can help an organization or individual. I learned through this experience that "being of service" means that I had to do what needed to get done, whether I felt like it or not. I spent the better part of 12 hours sorting wood and scrap lumber. This type of work wasn't directly working with animals, but the task that needed attention on the farm. I cleaned more poop out of pens than I care to recall. I wanted to make sure that I was 100% helpful to Tamerlaine Farm, and in this case, that meant doing what was asked, with a smile and an attitude of service!

The reason I was attracted to this volunteering assignment in the first place is because I am a vegan. Tamerlaine Farm Animal Sanctuary is a vegan establishment. Animals are rescued from deplorable conditions and then given the best possible lifestyles. One realization while there was that I am even more committed to the vegan lifestyle. Do you know why? Almost 95% of the animals living on this farm are facing hardships and health conditions due to humans. I met too many chickens who can't stand on their own legs because their bodies are too heavy due to breeding and excessive feeding. The "goal" is basically to feed them until they can't eat anymore, then slaughter them for meat. Their lifespans are 4-6 weeks, when in fact, chickens usually live for about 12 years. The more I learn about what humans are doing to farm animals, the more sickened I become.

I also had to dig deep at times and lead with love and compassion, when in fact I wanted to lash out at people who are so disconnected by what they are putting in their bodies and the violence that is happening behind the scenes. The hardest moment for me was when a friend on Facebook commented on how cute and loving Artie was, but then later, I saw her post a huge pork sandwich that she had prepared for dinner. That could have been Artie on her plate!

I realize that we all live our lives according to our own principles and standards, but I really don't understand people who claim to be animal lovers--but then continue to eat animals. There is a disconnect there that just makes me very sad and confused. I also realize that my journey is just that--my journey, and that I have to come to terms with many of my friends and family continuing to eat meat and wear animals (fur, leather, etc.) because it's not an issue for them.

I am learning what it means to love people for who they are--even when who they are is not in alignment with my own belief system. It's hard and uncomfortable at times. But this is exactly why I am committed to this book project. Personal growth is oftentimes painful and takes much courage, work, and soul-searching. I'd rather experience discomfort and growth than comfort and stagnation any day of the week.