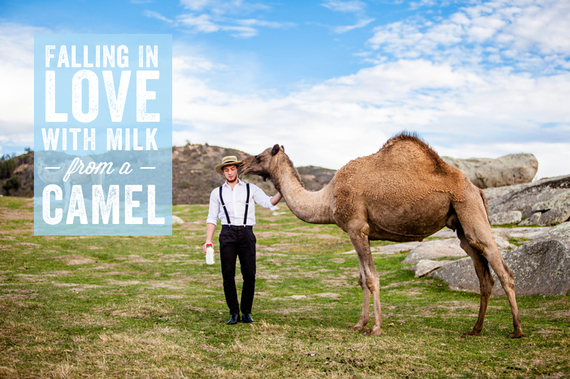 Entrepreneurs often have stories of companies finding them rather than the other way around, and Walid Abdul-Wahab, the founder of Desert Farms is no different. After being turned down from most corporate jobs due to his international citizenship, he was determined to find a way to stay in the States and so instead pursued an Entrepreneur Visa.

Around this time, he also realized that Americans were scrambling to find fad after fad of milk substitutes. These alternatives ranged from rice to soy to almond milk. Abdul-Wahab noticed, however, that each and every one of these fads came with their own side effects and also were not chemically similar to human milk.

Due to his Arabic culture, Abdul-Wahab was familiar with the concept of "raw milk" from goats, cows, camels, etc. in the Middle East. He wondered why American's never thought to adopt these thousand year old recipes. After doing extensive market research, he quickly realized raw camel milk solved all the problems people had with cow milk and also is more similar to human milk, making it better for consumers in a number of ways.

From here, he launched Desert Farms. I took a moment to sit down with him and learn more about what key steps entrepreneurs need to take when launching products.

Abdul-Wahab had the wisdom to know that his customer base would be strongest in California due to the enormous health craze taking over the state. Since his product's strengths best fall into medical categories, California was a perfect product-market fit. If you want to be successful, you need to establish as strong a product-market fit as possible.

As Abdul-Wahab puts it, "If I can make every one of my customers happy, it doesn't make sense for the product to ever fail." With such a severe standard of care for his customers, Abdul-Wahab has created an army for word-of-mouth marketing.

Too frequently entrepreneurs are not willing to do the hard things that need to be done for their company to take off. As Abdul-Wahab said in our interview, "You need to be really, really, really persistent. What I mean by persistent is exhaust every option, burn all bridges, get the answer you want, and only when you have no more moves do you go onto the next prospect."

Emailing someone once and maybe following-up once or twice is not good enough to be successful as an entrepreneur. You also need to work long hour weeks. Everyone wants to try to have a forty-hour work week. But without the needed information and hustle early-on, you will have neither the legitimacy nor the knowledge to actually automate your business to the level of working 40 hour work weeks and still being successful.

Without the persistence to keep up an atrociously high level of output, you can never expect to hit it big and eventually automate most of your work.

According to Abdul-Wahab, entrepreneurs spend a lot of time finding and creating internal teams. But then people fall off because they eventually lose interest.

This time would be much better put towards driving tangible growth and scaling. Forming a team can be done at a later stage when the size, legitimacy, and attractiveness of the company are higher. Until that point, outsourcing as much of the work as you can will allow you to increase productivity and give you the breathing room you need.

The only drawback of outsourcing is the trustworthiness of those you work with. "Referrals from mentors were extremely beneficial since it helps you know that the people you are working with are trustworthy and worth your time and money," Abdul-Wahab explained.

Asking mentors through accelerator programs, personal mentors, and anyone else whose opinion on the matter you trust will give you a wealth of information on how to properly choose the right outsourcing team.

4. Know how to market

Remember when I said to outsource? Don't outsource your marketing. At all. In this day and age, marketing can almost be done solely through digital avenues and hiring consultants to do your Facebook and Google ads for you, will only mean you're spending thousands and thousands of dollars on a job that would take you a couple of hours to get good at.

That being said, if you don't take that minimum amount of time to understand the in's and out's of how to structure a good campaign, you will end up either losing money on a bad campaign or never making great money from a lackluster campaign.