We are entering a disastrous new era in which all the economic gains go to the top one percent, according to data from economists Emmanuel Saez and Thomas Piketty. They report that "Top 1% incomes grew by 31.4% while bottom 99% incomes grew only by 0.4% from 2009 to 2012. Hence, the top 1% captured 95% of the income gains in the first three years of the recovery.... In sum, top 1% incomes are close to full recovery while bottom 99% incomes have hardly started to recover." (In 2012, $394,000 is the cutoff to make it into the top 1 percent.)

The odds are that we in the bottom 99 percent will never recover. That's because our nation has evolved into something entirely new: a billionaire bailout society. When I first used that phrase in 2009 at a presentation in Los Angeles I could feel the audience squirm. Surely I was exaggerating. Surely, I was just using a rhetorical flourish to stress income inequality. Surely cooler heads would prevail rather than my hot one. Oh, do I wish it were so.

But now we see in vivid detail what the new American order looks like. The top one percent live in another economic universe of high finance that sucks the wealth from the rest of us. In their world, banks (owned by and for the top 1 percent) are able to grow larger and larger so that there is no chance that they will be allowed to fail, even after these same banks took down the economy. (In 1965 they had assets equal to 17 percent percent of the U.S. economy. Today it's more than 65 percent percent.)

Free from any meaningful controls, financial gambling (called proprietary trading in polite circles) is now the dominant activity within our largest banks. In fact, in these too-big-to-fail banks, more money goes to financial gambling than goes to loans to businesses and consumers. These are not banks. Rather they are rigged casinos for the rich. The upside from these corrupt pursuits are kept by the top fraction of the one percent, while the 99 percent hold the bag when those phony bets crash the economy. And who among us doesn't think that will happen again?

Regulation is hapless as billions of dollars slosh through the political troughs. Serious enforcement is virtually non-existent because the enforcers fear that the entire financial system will fail should these criminal banks be prosecuted. Every national policy from the bailouts to "quantitative easing" has further funneled money to the super-rich. Meanwhile, the rest of us are told to plod along until jobs miraculously appear and our incomes finally rise. Dream on.

In sum, our new economic era is characterized by the supremacy of financial capital which vacuums up the productive wealth of the nation, and then uses the nation's wealth as an insurance policy to pay for its inevitable losses.

Entering Uncharted Territory
The billionaire bailout society is quite different than previous gilded ages. This can be seen clearly in comparing the aftermath of the recent Great Recession to what took place during the Great Depression. We need to remember that after the crash in 1929, America went on a crusade to rescue the economy by controlling Wall Street, supporting unions, and fundamentally rebuilding our physical and educational infrastructure. As Harvard economist Claudia Golden put it, a Great Compression took place during which the gap between the rich and the rest of us came down -- not by destroying wealth but by making sure working people got their fair share. In 1929 the top 1 percent grabbed 23 percent of the nation's income. By the late 1960s it was below 9 percent. 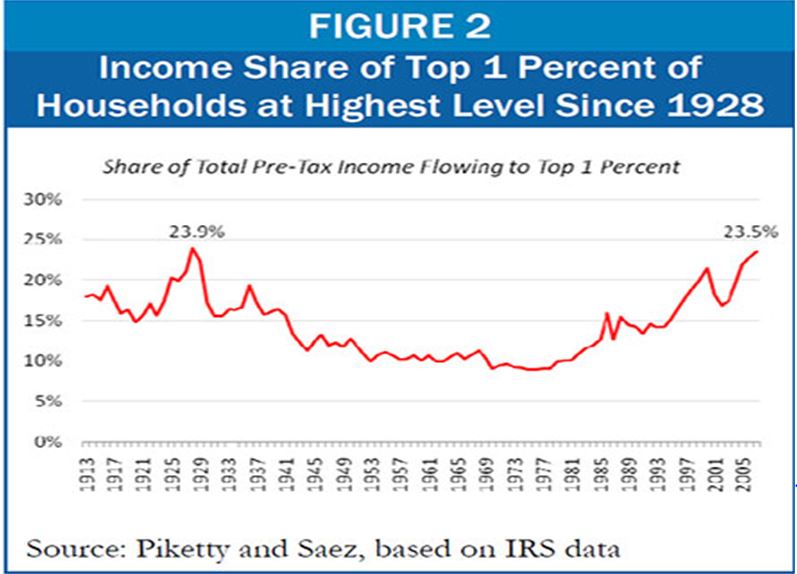 During the Great Compression we had our feet planted firmly on the neck of Wall Street. Financial gambling was held to a minimum. Incomes were no higher on Wall Street than in the productive economy. Finance and production more or less were in balance. But after deregulation set in the late 1970s, the income gap began to accelerate yet again, returning to the unconscionable levels of the late 1920s.

Here's the frightening news contained in the Saez/Piketty data: There is no Great Compression emerging this time around. We're not heading towards greater income equality. We're not building up the middle class or supporting unionization. We're not eradicating poverty and hunger. We're not expanding educational opportunity. We're not rebuilding infrastructure. Nothing we're doing looks anything like the society we built from the New Deal through the 1960s. We're not doing any of the things that would lead to a more stable and just economy. In fact, we're doing just the opposite which means the billionaire bailout society will become even more firmly entrenched.

How do we dismantle the Billionaire Bailout Society?
It starts with recognizing that the political circus in Washington has no chance at all in altering our pell-mell descent into crippling inequality. The Republicans are so blinded by nonexistent big government socialism that they fail to realize, yet alone acknowledge that the capitalism they so love, is long gone. Wall Street ate it for lunch.

While we could single out a handful of decent Democrats who more or less get the picture, the party as a whole is enthralled with Wall Street, many hoping to join the world of high finance after they serve their time in public service. There is no chance whatsoever that these two parties will tame high finance or undermine the growing billionaire bailout society.

But much still can be done, especially on the state and local level. That's where Wall Street is vulnerable to a strong counter attack. And that attack must be aimed at building public banks that can one day replace the Wall Street behemoths. (Many thanks to Ellen Brown and her new book, The Public Bank Solution for opening my eyes to this possibility.)

Here are some key facts we all should know about banks and public banks:

1. There is only one public state bank in the country -- the Bank of North Dakota -- and it's phenomenally successful. A relic from the Populist era, the BND invests in the people of North Dakota. It doesn't play with derivatives or high risk mortgages so it didn't get burned during the crash. It doesn't pay its executives high salaries (which are lower than what chauffeurs get on Wall Street.) It just builds the state's economy and returns a profit year after year to the people of North Dakota. As a result, the state has the lowest unemployment rate in the country (even after taking into account their oil boom.) And this so-called socialist bank resides in one of the most conservative states in the country.

2. Right now, we tax payers funnel over $1 trillion of our money into Wall Street banks when we pay our state and local taxes and fees. That money does not go into vaults in city hall or the state capital. It goes to Wall Street banks who at the moment are the only ones large enough to provide all the services required... except in North Dakota. There state revenues run through the state bank which in turns supports 80 community banks. If that happened in the other 49 states, we could create more than 10 million additional domestic jobs. Remember, a state bank invests in its state. A Wall Street has no allegiance to any state or country.

3. State banks also are the answer to funding infrastructure projects. Right now Wall Street prays upon state and local governments who need to borrow money to build schools, roads and other critical public projects. Those loans comes with enormous fees and interest rates that often double and triple the cost of these projects. Not so with public banks whose job it is to build up the state rather than rip it off.

What will it take to win?
There are some positive signs popping up all over the country. Low wage workers are organizing. The AFL-CIO is finally coming out of its defensive crouch and opening up to non-traditional worker organizations. More and more co-ops are forming. And more than 20 states are seriously considering moves towards public banks. But we'll need much more to dent the billionaire bailout society. We will need nothing less than a broad movement that connects all these efforts and many more into a coherent force aimed at high finance. The money labor squanders on meaningless elections should be funding the attack on Wall Street.

It's time we looked more seriously at the last time Americans rose up against Wall Street. That was during the Populist Era of the late 19th century. Then, urban working people and farmers demanded an alternative financial system to the one run by Wall Street. It was a clear cut struggle pitting private banking against public banking. Then, like now, the American people were disgusted by the domination of high finance. Then, like now, the two parties were corrupted by concentrated wealth. Then, like now, the modest prosperity of the working people was collapsing. It took great courage and resilience for Americans to rise up. It took thousands of dedicated organizers and educators who believed in the justice of their cause. Even though the movement was ultimately defeated, it left its indelible mark on America. Many of its policies and programs formed the constructive politics of the New Deal that ultimately tamed Wall Street for nearly a half a century. And it gave North Dakota its public bank.

We will need that kind of massive upheaval again if we hope to undo the billionaire bailout society.

Les Leopold is the director of the Labor Institute in New York. His latest book is How to Make a Million Dollars an Hour: How Hedge Funds Siphon Away America's Wealth (Wiley, 2013)