Increasing debt and runaway inequality are of a piece. That's because debt at compound interest rates is extremely powerful. Borrow a little today and, in time, you could become destitute. To get a feel for its power, imagine that you borrowed just one nickel at 5 percent interest when Christ was born. You would now owe the tidy sum of $225,438,991,066,856,000,000,000,000,000,000,000,000,000 -- more money than ever existed in the history of the world. Which is to say those who wield the power of debt, wield enormous economic power.

In our society we've given that power to private financial corporations, and they've done a masterful job in pushing us to the brink of debt peonage. The problem extends far beyond the much ballyhooed federal debt. The power of debt extends to nearly every aspect of modern life. Our homes, schools, roads, bridges, highways, utilities, corporations and virtually every product and good produced and sold depend on debt. By some estimates as much as 30 cents of every dollar we spend goes to cover interest payments on the debt accrued to make and sell all that we buy. (For example, of the $6.5 billion of private enterprise income in 2012, 36.8 percent went to interest payments.)

With our banking system in private hands, the simple truth is that as the debt levels accelerate, so does runaway inequality. Therefore key to controlling runaway inequality is to dramatically curtail the power of high finance.

But as a society we have done the opposite. For nearly a half century between the New Deal and the 1970s, Wall Street was tightly controlled. Taxes on the wealthy were high, worker wages were rising, and debt levels on consumers, companies and government were low. After finance wriggled free from these regulations private and public debt exploded, wages stalled, taxes on the rich fell and inequality soared.

Until about 1980, corporations ran up very little debt. (See chart below.) Their earnings were more than sufficient to cover reinvestment in new plant and equipment, research and development and improvements in employee wages and benefits. This "retain and reinvest" corporate ethos took place in an era when high finance was strictly regulated by government. Banks were limited in size, geography and function. Speculation was kept to a minimum as was the rampant buying and selling of corporations by what we now call private equity firms and hedge funds. 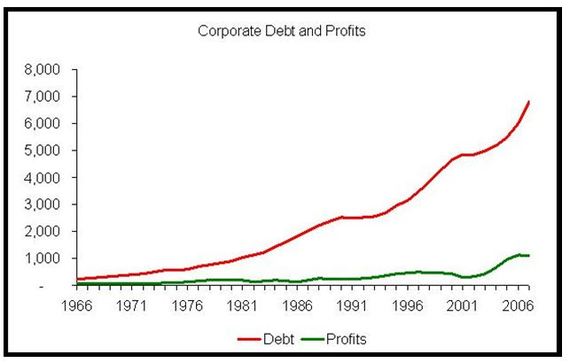 These controls, however, were radically upended by an unholy alliance of academics, financial elites and pro-Wall Street politicians. As finance became more and more deregulated, the massive growth of corporate debt followed.

In theory all that new borrowed money should have helped corporations and its employees prosper through more reinvestment in its workforce and product development. But those were not the goals of the new financial engineering. Instead, "retain and reinvest" was replaced by "downsize and distribute." The new debt often was used to buy up corporations. The acquired corporations were then saddled with the new debt and forced to use its revenue streams to pay it off.

The way CEOs were paid also changed. As compensation became increasingly dependent on stock options, CEOs used corporate earnings to buy up company shares in order to boost their price and enrich themselves.

To pay back these mounting loans, corporations squeezed their own workers. They downsized, moved abroad, cut wages and benefits and replaced full-time workers with temps. CEOs were transformed into financial engineers who sought more and more ways to enrich themselves through debt, while forcing their companies and workers to pay the price. And so, corporate capitalism morphed into what should be called financialism.

The Invention of the Indebted Consumer

Throughout recorded history, societies have feared instability caused by the imbalanced relationships between lenders and borrowers. Knowing how easily creditors could dominate debtors, many of the oldest legal codes focused on the mediating those relationships. (For example, the first known written laws, Hammurabi Codes -- 1780 BC -- set maximum interest rates on various transactions.) To further promote stability, most civilizations evolved powerful customs and informal moral codes to discourage personal debt. For most of American history, for example, going into debt was associated with unwholesome gamblers, gangsters and marginal businesses.

Our righteous attitudes on avoiding debt, however, crashed into the needs of mass production. The ever growing cornucopia of goods produced by modern capitalist production, also required the mass production of the "consumer." Through the advent of mass advertising, and later through government supported mortgages, consumers were urged to buy on credit in order to match demand to the enormous supply of goods produced.

However, just as with corporate debt, household debt was extremely modest until the last vestiges of financial control evaporated. Before 1990, the average consumer limited household debt to about 40 percent of disposable income (income we can spend after we pay our taxes). But after modern financial engineering invaded the housing and credit card markets (making it possible even for dead people to obtain mortgages) household debt soared to nearly 160 percent of household income. 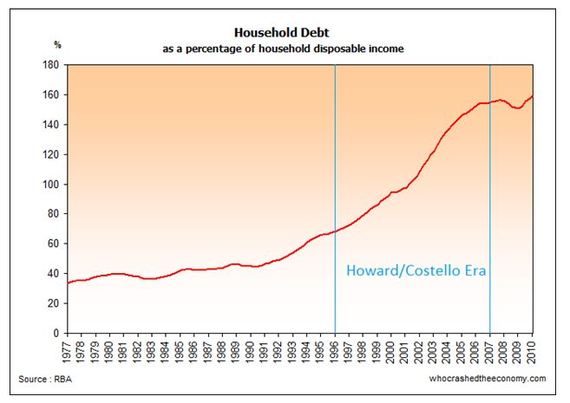 The more households paid to service their growing debt, the more money flowed into the financial sector. Rising inequality followed.

Student debt became the next territory for Wall Street to occupy. Once again, this required upending successful past practices. From WWII through the mid-1970s, public higher education was virtually free, led first by the GI Bill of Rights and then by the robust California and New York tuition-free higher educational systems. As the chart below shows, until the late 1980s, there was virtually no student loan debt at all. But as money for the public sector dried up (largely due to tax breaks for the rich) public financial support for higher education lagged behind tuition costs. Wall Street filled the breach and student debt mushroomed. 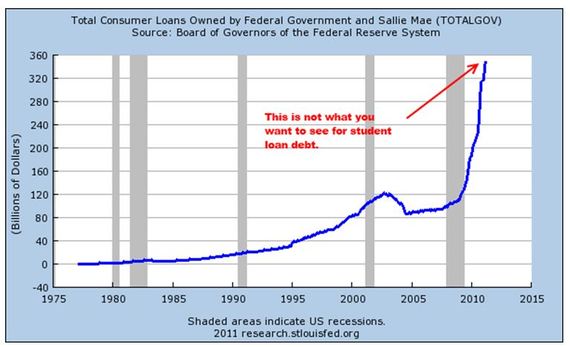 Government Debt Is Bad for Whom?

Finally we turn to government debt, a topic always super-charged with ideological fervor. But no matter where you stand on the role of government and how it should be financed, one basic fact should be acknowledged: Throughout the ages, the wealthy would rather loan the government money than pay taxes. The reason is simple. When the wealthy loan money to governments (historically to fight wars) they stand to make more money in return. Not so if they are taxed.

In the modern era, this is even more true since government debt instruments pay interest that often is tax deducible. The rich benefit by loaning money to government and having the rest of us pay it back through our taxes, not theirs.

It follows, therefore, as financial interests and the wealthy increase their power over the economy and politics, we should expect federal, state and local government debt also to rise. Again, this was not the case for most of the post-WWII period when Wall Street was tightly controlled. During that era, taxes on the rich were high and public debt levels were low. But after the deregulation of Wall Street, public debt mushroomed, just like corporate, household and student debt. 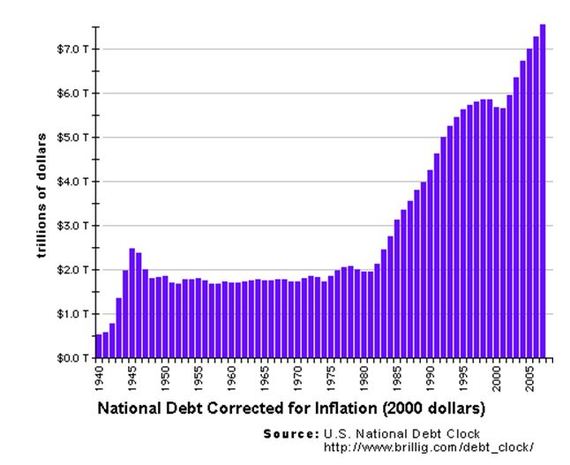 We are certainly beholden to Wall Street. By 2006, 40 percent of all US corporate profits went to Wall Street -- up from 7 percent in 1980. And over $21 trillion is now hidden in off-shore tax havens- and moves there via Wall Street. Furthermore, the top three banks dominate the entire financial system. These oligopolists have made it clear to all, they are far, far too big to fail, jail, or curtail. 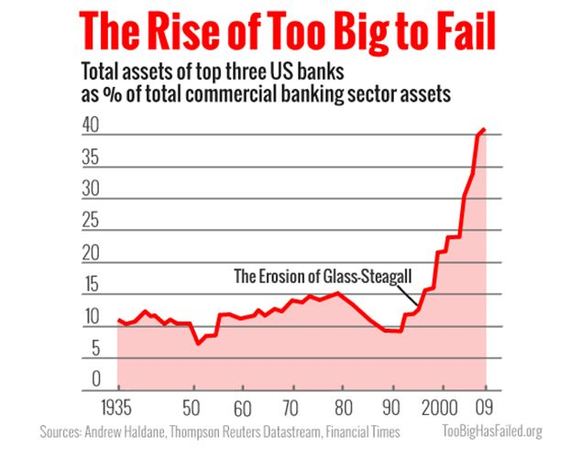 What will happen when this debt pyramid comes tumbling down again? As financial expert Ellen Brown points out, after the next crash we should expect a new kind of bailout. It's called a bail-in, and it already has become part of European planning. Instead of giving billions to the banks, the government will ask the banks to take it from their depositors -- namely us.

With ever rising public and private debt, we seemed trapped. After all a cornerstone of our civilization is that debts must be repaid or bankruptcy declared.(Countries like ours that can print their own money, however, can never go bankrupt.) As the economy grows, it is likely that federal debt as a percent of the entire federal budget will decline. But with stalled personal incomes, households may be struggling with debt indefinitely. But there is another way out.

It's starts with recognizing that the root of the problem is not just the quantity of debt per se, but rather who really controls and profits by it. Private banks do not have to be masters of the economic universe. Instead, we could model our financial system after public banks, like the Bank of North Dakota. If we had 50 state banks, instead of just one, the income-distorting power of increasing debt could be curtailed, and there would be much more money in the public treasury. In North Dakota, the state bank returned record profits nine years in a row, with $81.6 million flowing into the state coffers in 2012. It provides support for infrastructure projects. It insists that when it loans money to businesses, jobs must be created in North Dakota. It helps ease the burdens of student loans... and it doesn't gamble in financial markets.

But, there's a catch that Wall Street detests: The CEO of the Bank of North Dakota makes per year what a top Wall Street banker makes in one hour! So, if we want to really do something about runaway inequality, we will need public bankers who are more than willing to work for about $150,000 to $250,000 a year, instead of $50 million.

We are learning painfully each and every day that reregulating Wall Street does not work. Reforms have been tepid at best. Banks get fined, and then fined again, for every financial sin imaginable -- money laundering for gangsters and rogue states, ripping of servicemen and women by financing payday loan sharks, colluding to fix interest rates, insider trading, controlling commodity markets, and illegal financial gambling. Yet the same executives and the same institutions prevail as if these crimes are just the normal cost of doing business.

Change becomes much more possible if and when we are able to transform every discussion about debt into a debate about creating public banks to replace Wall Street's financial stranglehold.

Les Leopold is the director of the Labor Institute in New York. His most recent book is How to Make a Million Dollars an Hour: Why Hedge Funds get away with Siphoning away America's Wealth, (Wiley, 2013). He is currently working on a book about why the richest nation on Earth is so poor.