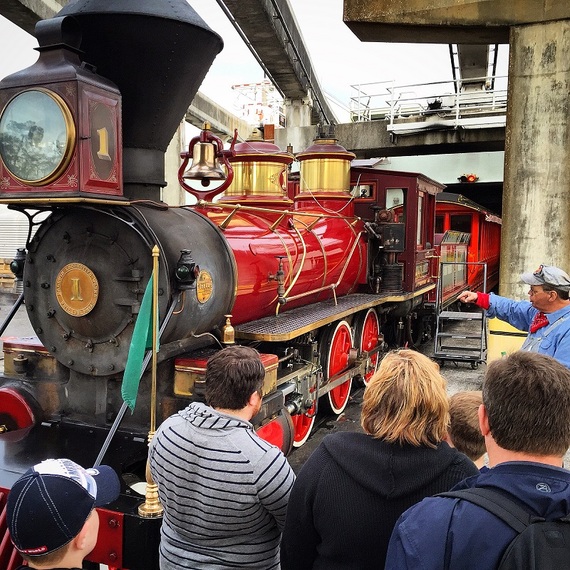 Walt Disney loved trains, and because of that, the world is a better -- and happier -- place.

Walt was fond of saying that his empire "started with a mouse." And indeed, his creation of Mickey Mouse did make him a fortune. But the idea for Mickey Mouse came to him while riding a train.

It's quite possible that if Walt was not such a railroad buff, Disneyland and none of the other 11 Disney theme parks would exist. Certainly, if not for Walt, four old beaten-up steam locomotives that did decades of work hauling hemp and sugar cane on the Ferrocarriles Unidos de Yucatan (United Railways of the Yucatan) would have long ago been turned into scrap metal in Merida.

Instead, these four ancient engines from Mexico have been transformed into the most popular steam trains in the world, bringing delight to kids and pulling 3.7 million passengers a year.

Today, the Disney theme park empire has 46 resort hotels in four countries and more than 140,000 "cast members" who keep the parks running. Walt Disney World in Orlando alone is the largest single site employer in the United States with a $1.6 billion payroll.

Yes, it all started with a mouse. But it also might never have happened but for Walt Disney's love of trains.

"In one way or another, I have always loved trains," Walt Disney.

The best place to follow this remarkable story, is to start at the Walt Disney Family Museum in San Francisco. Located on the Presidio, a former army base that's been turned into one of America's newest national parks, the huge 40,000 sq. ft. museum tells the life story of Walt Disney, letting you get to see - and hear -- the man behind the magic.

Much of the story is narrated by Walt himself on 200 video screens. There are interactive galleries, artifacts, photos, early drawings, historic cartoons, and a 14-foot model of Disneyland.

From gallery to gallery, the story unfolds. Walt was born in 1901 and had an idyllic childhood on a farm in Marceline, Missouri. Railroads at this time were much more than transportation, especially to Walt. His father was a railroad mechanic and his Uncle Mike Martin was a steam locomotive engineer. Walt's first job was selling newspapers, candy and fruit on the Atchison, Topeka and Santa Fe Railway.

His other great love as a youth was drawing cartoons. At 16 he faked his age so he could become an ambulance driver in France during World War I, where he spent his down time drawing cartoons. Many of his drawings from that period are on display in the museum.

Back from the War, with just $40 in his pocket, Walt took a train to California and with his brother Roy as a partner, set out to change the world of animation. There were ups and downs. In 1928, he lost his first success, Oswald the Rabbit, to a bad business deal in New York.

Bankrupt, he was returning to California by train with his wife Lillian when he thought up a new cartoon - Mortimer Mouse. His wife thought the name was too formal and changed it to Mickey. For the next 20 years, Walt would provide the voice for Mickey Mouse, while Disney Studios released a steady stream of ground-breaking animated movies, from the first full-length feature, Snow White and the Seven Dwarfs to Fantasia, now regarded as a masterpiece.

Toy Trains Give Walt an Idea

Walt had always had a Lionel toy train set in his office, but in the late 1940s he discovered that two of his animators had bigger ambitions -- they had backyard railroads. Ward Kimball, who drew Jiminy Cricket, had a full-scale train in his backyard, while Ollie Johnson, famous for creating Pinocchio and Bambi, had a large-scale model railroad that you could actually ride on.

Walt went to the studio machine shop and hired Roger E. Broggie to build him a miniature railroad. It was the beginning of a wonderful friendship. 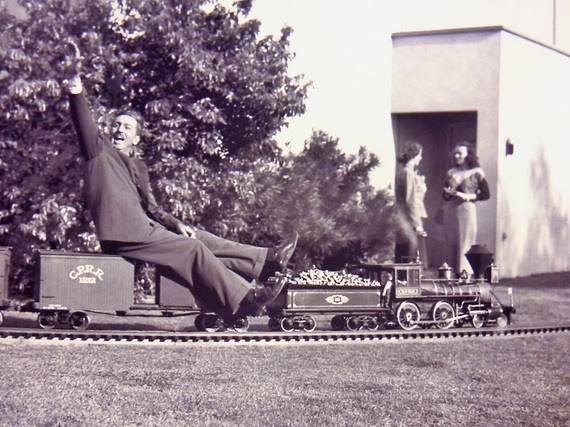 Ultimately, Walt's backyard railroad, called the Carolwood Pacific after his street address, had a half-mile of track, switches and a long trestle. His wife had a problem with the train going through her flower garden, so he buried a 70-foot-long tunnel under the plants. He also named the engine after her - the "Lilly Belle."

The seven-foot-long locomotive and tender and many of the cars are now on display in the museum. Walt could sit on the tender and drive the locomotive around his yard pulling 11 people, who would sit on top of the miniature railcars. His daughter's friends, neighbors - and even strangers - stopped by for a ride.

Walt was getting an idea.

Before his train, he had taken his young daughters to amusement parks. He said, "Saturday was always daddy's day. So I'd take them to the merry-go-round and different places and as I'd sit while they rode the merry-go-round. I felt that there should be something built where parents and children could have fun together." He wrote his ideas for a new type of theme park, originally called Mickey Mouse Park, to a friend, saying, "I just want it to look like nothing else in the world...and it should be surrounded by a train."

His brother Roy and his wife thought he was crazy. At this time, amusement parks were trashy places with a bad carnival atmosphere. But Walt persisted with his dream, and on July 17, 1955 Disneyland opened in Anaheim, California.

It was like nothing else in the world. And it was circled by a train. 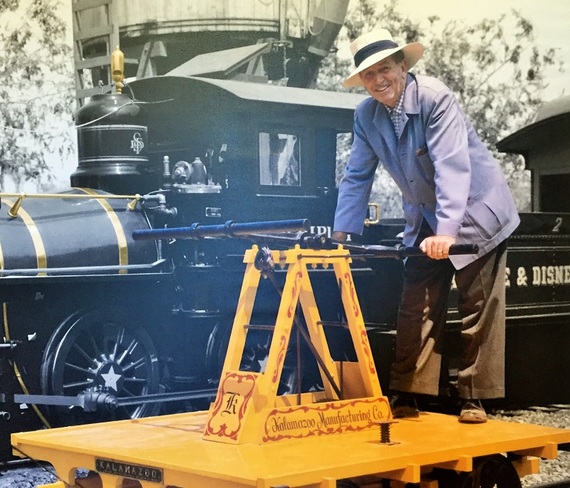 The park was a phenomenal success. But Walt had bigger dreams and set his eye on Florida, where he wanted to build another theme park. "I am doing this because I want to do it better," he said.

The locomotives at Disneyland had been built from scratch, but for the new park, he wanted real locomotives, and he sent Roger Broggie around the world to find them.

Roger did. In a railroad graveyard in Merida, Mexico, he found four old rusted black locomotives that had hauled sugar cane, sitting forlorn and abandoned, ready for the scrap heap. Roger bought them for $750, shipped them to Florida, and helped completely restore them with a bright new paint job, brass fittings, new smokestacks, and new square headlamps.

The four engines were named the: Walter E. Disney, the Lilly Belle, the Roger E. Broggie and the Roy O. Disney.

Sadly, Walt never got to see them. He died unexpectedly from lung cancer complications on Dec. 15, 1966. But his brother Roy took up the mission, and on October 1, 1971 opened the Magic Kingdom in Orlando with all four locomotives circling the new park.

Today, some 3.7 million people ride the Walt Disney World Railroad every year, making it the largest railroad in Florida carrying more passengers than AMTRAK. You can take the 20 minute, 1.5 mile ride around the park, or if you want an up close and personal look at the trains, you can take a $54 backstage tour. The tour is limited to 20 people and meets outside the gates of the Magic Kingdom at a shocking 7:30 a.m.

The early departure is soon forgotten when a real locomotive engineer, Joe, shows up in overalls, striped engineer cap and red bandanna, ready to take us on our own personal train ride.

Each locomotive circles the Magic Kingdom 70 times a day, but on our backstage tour, our personal train stops after a quarter mile and blows three short whistles. We will learn that this is the signal for going in reverse. There are 16 different whistle patterns and they all mean different things. Two short whistles means moving forward, one long whistle and one short (followed by a clanging bell) means coming into a station.

On our tour, the locomotive backs over a switch and pushes its five cars back to the roundhouse, located outside the park, where we will get to see all of the engines getting ready for a day's work.

It takes 45 minutes to fire up each locomotive and get the water to 425 degrees to create the steam that propels it. The locomotives are stored in the bottom floor of the massive "roundhouse" (which is actually rectangular because the upper floor is where Disney World stores all their monorails at night). Crews work all night long preparing the engines, polishing the brass, repainting some of the trim, refueling the tender (the train uses 22 gallons of fuel an hour).

How to Run a Locomotive

Joe takes us up into the cab where we get to see how to drive a locomotive. A giant wheel in the cab is covered with notches. The throttle has a handle that fits in the notches and can be moved forward or backward a notch at a time. That's where the expression, "Bring it up a notch" comes from. Bringing it up a notch will increase the speed, bringing it down a notch will decrease speed. For safety, these locomotives travel at a maximum of 10 mph, but they could do 50. 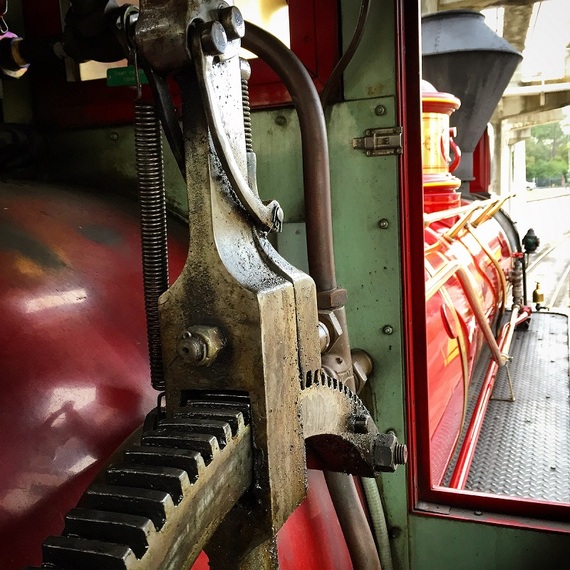 Joe tells us some of the other every day expressions that came from railroading. "Blowing your stack" comes from letting off steam pressure through the smokestack, whereas "Spinning your wheels" is what happens if a locomotive tries to start too quickly and the wheels spin on the tracks without getting traction.

We wonder if Joe is just "yanking our chain," but turns out, that's another railroading expression. So is "Wrong Side of the Tracks," which was the side where wind normally blew smoke and ash, so it was where the poor people lived. 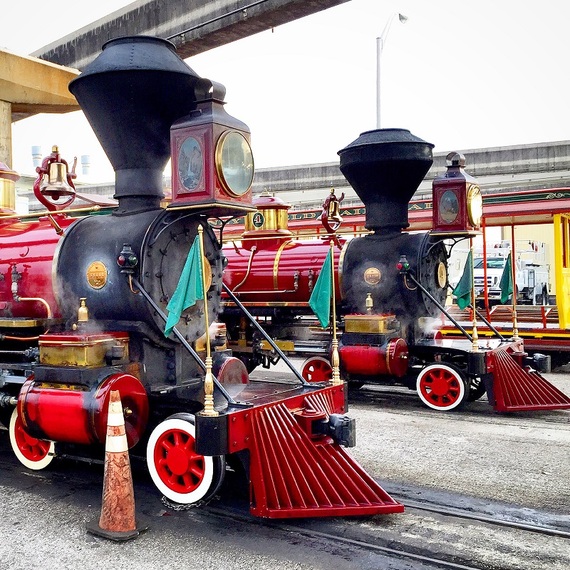 The park opens at 9 a.m., so it's soon time for the locomotives to get to work and we have a rare opportunity to see the trains the Walter E. Disney and the Roger E. Broggie side by side. These two locomotives were built side by side in 1925 by Baldwin Locomotive works for Ferrocarriles Unidos de Yucatan.

They worked side by side in Mexico for 40 years, and today they still run on the same tracks together.

No other two locomotives in history have ever done that.

It's a fitting tribute to Walt and his friend Roger, who did so much to keep the adventure of steam trains alive. Millions upon millions of people around the world have been able to hear a real steam whistle, see and feel the cloud of steam as an engine pulls into a station, listen to the clanging bell and enjoy the thrill of riding behind a real locomotive as it chugs down the tracks.

"I just want it to look like nothing else in the world," Walt said about his theme park. And he built it. Circled by a train.