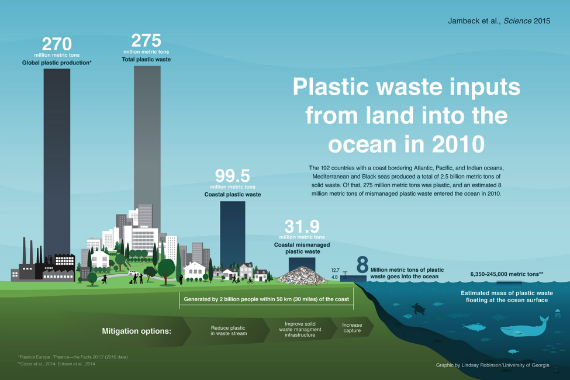 Graphic by Lindsay Robinson/University of Georgia

When I had to choose a focus in environmental engineering, I fell in love with the study of solid waste, which is trash, or better known as anything that you recycle or throw away every day. The reason I felt waste was different from designing water or wastewater facilities was that it so closely involved people. And people have strong reactions to it -- especially when a waste management system might be physically close to them. Yet it is something we create every day and have to manage. Even with waste reduction and engineered systems, managing trash still involves more human effort than flipping switches for water or electricity (which in some cases now don't even require that level of effort). For many of us, it still requires effort to sort and take out the trash, and roll the bin to the curb for collection. And solid waste management continues to be influenced by our choices and behavior (Are you going to buy that? Recycle that?).

Research interest in the issue of marine debris and plastic pollution in our ocean has grown tremendously in the last ten years. Once I heard that some of our waste was ending up in the ocean in 2001, as an environmental engineer focusing on solid waste management, I was motivated to help. So I worked on several initiatives over the past 14 years characterizing and doing spatial analysis of debris, including the development of a mobile app for reporting litter and marine debris anywhere in the world called Marine Debris Tracker. In 2011, I was asked to be a member of a scientific working group at the National Center for Ecological Analysis and Synthesis. We are an interdisciplinary group and one of the questions we addressed in our research was: How much plastic waste goes into the oceans each year from solid waste on land?

We recently published these results in Science. And, based upon our framework, we estimate that in 2010, people added eight million metric tons of plastic to the ocean. This is equal to five grocery-size bags filled with plastic going into the ocean along every foot of coastline in the world. If we assume a business-as-usual projection with growing populations, increasing plastic consumption and increased waste generation, by 2025, this number doubles -- we may be adding 17.5 million metric tons of plastic per year to the ocean. If that happens, then our cumulative input over time from 2010 to 2025 is projected to be 155 million metric tons.

But this is a problem we can make headway on. We estimate we can reduce this number by 77 percent or more. How?

Solutions include improving solid waste management where it is lacking, and also working upstream using principles of green engineering to reduce plastic waste generation where possible, improve product design and substitute materials, moving towards a more circular system. When I visited Chile last month (August 2015), I saw some of these solutions being implemented. I met with engineers at a well-designed and operated landfill, visited community recycling centers, saw creative repurposing and recycling of electronic waste, and visited a plastic recycling and remanufacturing facility where post-consumer plastic was keeping its value by being recycled into the same products again. Legislation on extended producer responsibility could provide for expanded resources and infrastructure in Chile.

But more can be done, and we must implement many solutions worldwide. Also, it is critical to understand that our work in other countries must be culturally appropriate. We don't know what it is like to live in another person's world and walk in their shoes, so to speak, and one persons' trash can directly lead to another person's income. And this goes for domestic issues too. One of my favorite quotes is by Michelangelo: "I am still learning." And I still learn, every day. And when I visit other countries, I am always interested in the way they manage their solid waste. We still have so much we can continue to learn and share with one another around the globe. Sincerely including stakeholders in meaningful ways will provide more culturally appropriate designs and more holistic solutions, which are desperately needed for the marine plastic pollution issue and other global issues presented at Our Ocean 2015.