When I first told my aunt I was writing a memoir, she said, "Be careful what you write."

"I know." She looked at me with those loving eyes of hers, no judgment, but no understanding either. Then she walked out of her kitchen, a plate of food in her hand. The heaping plate she'd just served me sat on the table, heat rising off the rice in smoky tendrils. This is my Titi, whom I can turn to anytime, who is very much a surrogate mother to me.

Two years ago, I showed her the picture I'd found in Meryl Meisler's exhibit "Bushwick in the '80s." (Meryl had had the picture mounted on cardboard and had gifted it to me.) 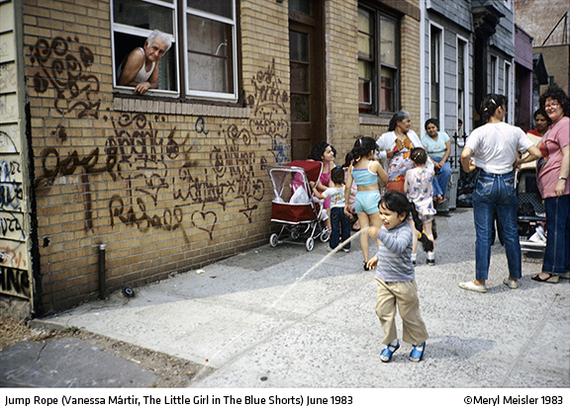 Titi gasped. "Oh, my God, look at your mother," she said, pointing at her sitting on the garbage cans in front of the building I'd grown up in, where Mom still lives.

"That's me in the blue shorts," I said. My Titi was all oohs and ahhs. "Do you remember him?" I pointed to the old man in the window. He's looking at the camera. His stare is so piercing that your eyes go to his unwillingly; you can't resist.

"Yeah, that's Valentín, Millie's uncle," she said. She brought the picture close to her face to examine it. I imagined the slideshow of memories the picture prompted.

She dropped the photo onto the washing machine like it was suddenly scalding her fingertips. She walked to the stove and checked the flame, like she'd forgotten she'd just lowered the rice, and checked on the chicken in the oven.

"Ay, that never happened to me, thank God," said Titi's best friend Aria, who'd been listening quietly until then. Aria has a deep Bronx Boricua accent and is my age. She said she knew someone who'd been molested by her cousin. "It fucked her up for a long time." They clutched the metaphorical pearls around their necks, then they walked past me and out of the kitchen, where I stood in front of my aunt's washing machine, holding the picture in my hands.

My aunt didn't make it the few steps to her living room before she turned around and walked back to the kitchen. She put her hand on mine. "I understand why you're writing this book." From her eyes, I knew it was true.

"You own everything that happened to you. Tell your stories. If people wanted you to write warmly about them, they should've behaved better."
--Anne Lamott

Whenever I see this quoted as a status update or meme, or offered as advice to a memoir writer, I say a quiet "Carajo, yes!" and throw my right fist up in a battle cry. See, I too have given this advice to my students. I've followed that with "But it's a lot easier in theory than it is in practice."

I think about my mother.

Guilt. That's the overwhelming feeling I get when I answer the questions in the book I've been working through for a few weeks now, The Emotionally Absent Mother: A Guide to Self-Healing and Getting the Love You Missed, by Jasmin Lee Cori, M.S., L.P.C.

"Is Mother where you turn for comfort and refueling?" No.

"If not, do you think she would be there if you did?" No.

"Do you remember her being there for you?" When my brother Carlos died, for a short spell, until she rejected me again like she has so many times.

I think, "She couldn't have been that bad, Vanessa." Except she was.

I question myself: "Am I exaggerating? Am I vilifying her? I don't wanna vilify her. That's not what this is about, Vanessa." The inner dialogue turns to scolding rather easily.

It's the same shit I've told myself over the years. The same playing down and denial of my feelings.

"You can't say that. She's your mother, Vanessa."

I hear her in my head: "I'm the mother!" Mom still has an accent, though she's been in this country almost 45 years.

The first chapter in my memoir, A Dim Capacity for Wings, is called "How Imagine It." It's my mother's story, which I've pieced together from overheard conversations, secrets revealed in whispers, and confessions told when I was already years into adulthood.

I was 33 when mom told me the story of how she'd met my dad. As a kid, whenever I'd asked about him, she'd pushed me away and told me he was a sinvergüenza who'd left us and that's all I ever needed to know. At some point, I can't remember when, she'd told me he'd tried to kick me out of her. He'd accused her of lying about being on the pill. The truth is that I was conceived on the pill, and Mom continued to take the pill for four months before realizing she was pregnant. That's why I was in the NICU for much of my first year of life.

It wasn't until I was 33 that Mom finally confessed, "He loved me, Vanessa. It was my fault too. No podía tener relaciones. Lloraba. Por ese desgraciado."

And that was when I finally started seeing my dad's humanity. He was a man whose woman would cry when he touched her.

Mom never talked directly about the rape that had borne my brother until last year, when Carlos was in the hospital, dying.

My brother Carlos had told Mom I was working on a memoir. She hadn't made any comments or asked any questions until one day last spring, when she and I were on the train on the way to the hospital to see my brother. She asked about the 50 pages I had due for my residency at VONA/Voices. I told her I had them in my backpack. She reached for it. "Let me see." I yanked it away. We both laughed.

"How do you feel about me writing about you?"

For years, I'd imagined her flipping out when she heard about my book. I'd envisioned her hurling her body at me, screaming, "¡Traicionera! ¿Cómo te atreves?"

Instead, Mom started telling me stories about her childhood and how she'd met Millie (who was her partner for more than 20 years) and why she was so hard on me.

On the cruise we went on as a family two months after Carlos died, Mom said, "I've never gotten over what happened to me." She stared out at the ocean; the moonlight glistened off the tears on her cheeks.

How could you have, Mom?

I walked around with a journal for the entire eight days of the cruise. Sometimes, I'd just sit and listen to them talk, las mujeres de la familia -- my mom, my grandma (Mom's mom), my Titi, and a family friend from way back when they were just girls in La Ceiba, Honduras. I'd snatch out my journal to capture a line or a new memory shared.

On the last day of the cruise, as we were packing in the cabin we shared, Mom asked, "Why are you writing this book?" She kept folding and unfolding the same T-shirt.

"Because I can't carry it anymore, Ma."

She looked down at the shirt, folded it again and tucked it into her maleta.

Recently, I met a poet friend, Rich Villar, for breakfast. We both suffered devastating losses last summer, within days of each other -- I lost my brother, Rich his best friend, in a murder-suicide. Rich also lost his older brother three years ago, to drugs and reckless living. I told him about the three months my brother and I had shared before he died, and I told him about the rape. Rich was quiet. He looked down at his now-empty plate and took a sip of his strong-ass French coffee. (It was so good that I drank three cups.)

I wondered if he knew how many times I'd said those very things to myself.

"This is how the books starts," I said, fidgeting with the napkin on my lap. "'When I told my brother what I was writing, he lit a cigarette and pulled on it so hard, I thought he was gonna burn it to the filter. Then he said, "Write it, sis, maybe somebody'll fuckin' talk."'"

I've thought about this obsessively, turned it over in my head and heart -- the decision to write these essays and this memoir, and to chronicle the journey on my blog. I've dissected these stories, written and rewritten them, sat with them, prayed with and for them. I've thought about how it's going to affect my family, my mother more than anyone. These are her secrets I'm revealing, her shame, that silence that has eaten through us like gangrene, a flesh-eating bacteria.

This silence killed my brother.

I had a vision a few months ago. I saw her in the corner of my room, diagonal to my bed, where I was lying down. She had two braids and brown skin, and her face was lined deep with arrugas. I knew she was la madre. I thought, "She's come to tell me that what I am carrying is old, el dolor de generaciones de mujeres de mi sangre. Mujeres who were raped."

Silence has been carried down for generations in my family. This vieja, la madre, had come to tell me she knows they're asking a lot of me. "You're the only one who can do it," she said.

I fell asleep with her watching over me. I still feel her lingering in my room as I type.

David Sedaris typically writes about his family. In his essay "Repeat After Me," he writes about the struggle we nonfiction writers have with the privacies we invade in our work:

In order to sleep at night, I have to remove myself from the equation, pretending that the people I love voluntarily choose to expose themselves. It's a decision much harder to maintain when a family member is in the audience.

See, we don't take it lightly, though it may come across like that.

In the essay, Sedaris reveals what so many of us are afraid of: facing our true selves, with all our flaws and our ugly. We like to think that we are noble and just, but are we? Am I? If my mother didn't give me permission to write her stories, would I write them anyway? I already had. If she'd told me she didn't want me to write about her, would I have stopped? No, I know I would not have.

Sedaris is really asking us this: What will it take for all of us (including him) to take a real, genuine, unflinching look at ourselves, rot and all?

I may still be called an atrevida and traicionera. I hear my brother's words on loop in my chest: "Write it, sis, maybe somebody'll fuckin' talk." I feel the guilt and the shame dig their claws into me. They make my fingers tremble as I type. I clench my jaw. I hold my breath. I see my daughter's face and remember the why: She can't carry this silence like I did. I won't allow it. I write on.