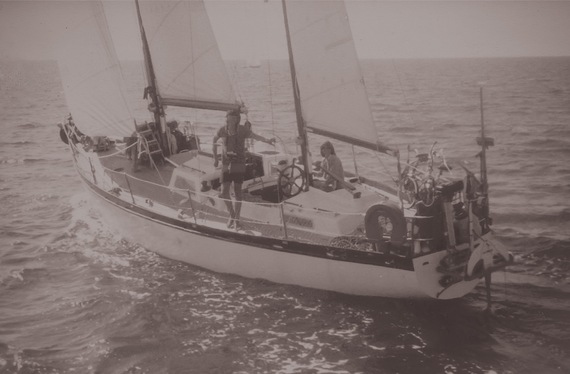 Two nights at sea, my husband's glasses overboard, a bit of inclement weather, and our decision was made. We were hooked. We would buy a sailboat and sail the world with our children. And we did.

I had married Michel, a Frenchman, and we were newlyweds, living on the coast near Bordeaux, France, at the time. A friend of ours invited us to sail out of the nearby port of Arcachon, across the Bay of Biscay, (the Golfe de Gascogne) to Spain, during the summer of 1977. There would be at least two nights at sea, something we had never done. In our pasts, both my husband and I had briefly sailed -- and I mean very briefly -- as adolescents. He, through courses offered at his school in France, and me, thanks to an occasional weekend outing with a friend and her father in the bay of Newport Beach, in Southern California. Neither my husband, nor I, came from sailing families.

But that morning, as we savored our coffee at sunrise on the deck of the sailboat, snug in the harbor of the northern Spanish Basque country bastion of San Sebastian, (and in spite of Michel having lost his glasses over the side of the boat very early on in the trip, and our encounter with that bit of bad weather), we had this epiphany. Oh my word, such an eye opener this trip turned out to be! It was the single most hallmark event that inspired us to change our life and our goals. It was seismic and monumental! It seemed (to us) that we had overcome some formidable elements to get from point A to point B in this trip. We were seduced by the magic of starting in one land, waking up in another, and having arrived under one's own power by harnessing the power of nature. We had to take our turns standing a midnight watch like everyone else on the boat, and to make it even sweeter, neither one of us had been seasick. To this day, almost 40 years later, we can both turn to each other and practically note the time and date that we promised each other we would buy a sailboat and travel.

Michel and I were both starstruck by wanderlust. Well before I met him, he had already criss-crossed the entire United States by hitchhiking, east-to-west, north-to-south. I desperately wanted to travel to Europe and learn a foreign language with which I could ply my trade as a journalist. These goals led me to France where I met Michel. We were quite sure we wouldn't always live in France, and thus we weren't drawn to settle or buy a house there. But we had a dilemma. We wanted to start a family, but how to continue traveling at the same time with small children? With this sailing trip we knew that living and traveling on a boat would be the perfect solution to embark upon our dream of traveling as a family, and we enjoyed the sensation of being on the water. We could have our house and take it with us, like a snail!

We knew we didn't want our children growing up in "suburbia" with an idea that the world stopped at their door. Through travel they could learn so much more. We needed to do it now, not after age 60, retired, and most likely burdened with health issues. Thus, we decided to "retire" as long as we could while they were young and impressionable. We had a vision and began with a general plan, and an ultimate goal of sailing around the world.

Shortly thereafter, I became pregnant with our first child and the opportunity to buy our boat, Cowabunga, came along. We managed to live and sail on Cowabunga, a 42-foot "ketch" (two masts), for 10 years, first moving on board in 1980 when our first born son was 1, and our second son soon joined us on the boat as a newborn, barely three years later. We spent the first two years renovating the boat, learning how to live on board and sail, taking short trips along the Atlantic coast of France, and then finally setting sail, August 29, 1982 from our home port of Le Verdon, at the mouth of the Gironde River, 80 miles upriver from Bordeaux. We literally cast off the ties that bound us, leaving the dock and slipping out to sea across the Bay of Biscay, on a warm summer afternoon, never to look back. Our boys were 3 years and 5 months old when we left, and 8 and 11 years old when ended our trip, sailing into the San Francisco Bay Area in July 1990. That was the first time our boys ever lived in a house. 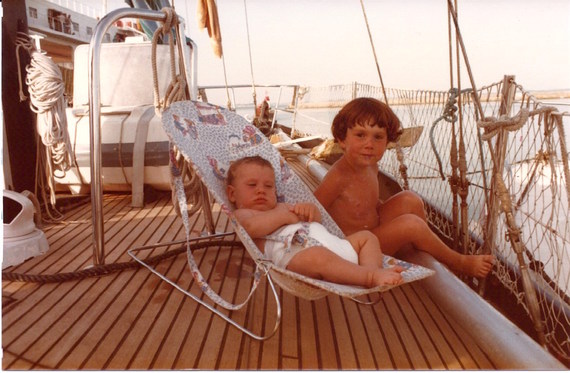 Of those 10 years on board, we spent eight of them crossing borders and oceans from France to Spain, Gibraltar, Canary Islands, Morocco and Senegal in Africa, Brazil, Argentina, French Guiana, the Caribbean, Florida, Cuba, Curaçao, San Blas Islands, Panama Canal, Central America, Mexico, and finally California. We would stop and work a bit here and there (Michel in architecture offices as a French-licensed architect; me as a bilingual secretary, English-as-a-Second-Language teacher, or freelance journalist), plying our trades for a few bucks more so we could continue our travels. We put the boys in school here and there, or homeschooled them ourselves.

We know this decision changed the direction of our lives, and formed our children to be adventurous souls. We were new college graduates when we got married with promising careers, and indeed, we began to work as such. But these early career beginnings were suddenly unimportant to us that day we sailed out across that ocean.

Life dealt us many lessons during our 10 years of vagabondage. Things didn't always go well. We had major equipment damage due to storms, my husband withstood some major medical life-and-death health issues, we were almost caught up in the American Invasion of Panama in 1989, a midnight intruder awakened us on board in Brazil, and we almost lost one son due to a near drowning. But we also had some equally amazing adventures and encounters such as being allowed to sail unhindered all throughout Cuba for several months in 1988, the crew of the U.S. Navy vessel the U.S.S. O'Bannon came to our mechanical-aid rescue in Dakar, Senegal; we attended the inauguration of Argentina's new president Raoul Alfonsin in the Plaza de Mayo, Buenos Aires, their first democratically elected president following the demise of the murderous military junta of the 1970s; we explored Devil's Island before it was tourist friendly; we crossed the Atlantic in 30 days from Africa to Brazil; we spent a week at the intimidating and hostile, yet awe-inspiring, St. Peter and St. Paul Rocks on the equator, near the site of the Rio de Janeiro-Paris Air France flight crash in May 2009; and at one point Michel worked at NASA at the Kennedy Space Center in Cape Canaveral, intimately involved with the Space Shuttle.

Contrary to our original blueprints, I didn't become a star foreign correspondent for Time Magazine as I had dreamt, and Michel didn't become architecture's next Frank Lloyd Wright, but our adventures taught us how to "go with the flow," to be flexible, to make do with what we were dealt and attempt to turn it to our advantage. We raised two exceptional and exceptionally adventurous young men, both of whom continue their lives in this vein today. For a few years we stopped the world and got off. Yes, eventually, we had to hop back on, but with no regrets. We carved out a lifetime of experiences, memories, learning, living, growing and loving during those years. And we are here today to prove it. 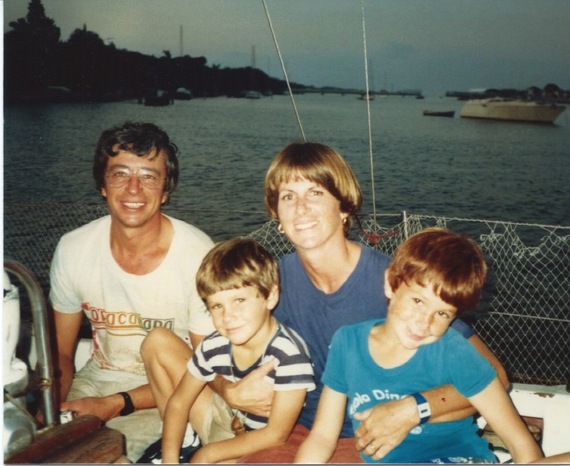