One of the most important things I've learned from many years of activism, is that the world's most challenging problems... and their solutions, are interconnected. As I reflect on what it will take to achieve gender equality, it's clear that any real solution must also achieve environmental equality. 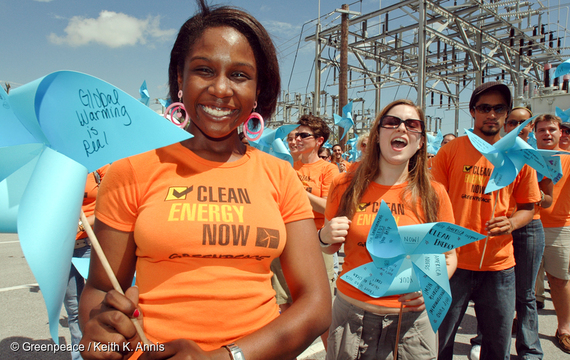 Today, all over the world, women are disproportionately paying the price for the damage we're doing to our planet. Talk about a lose lose situation! Climate change is making the lives of millions of women much harder. In many parts of the developing world, women walk for miles each day to collect water and firewood for their families. As the planet warms and water gets scarcer, the burden on these women will only get heavier, eating into precious time that could be spent on education or productive work. If food and water run out altogether, climate migration forces the break up of communities and creates competition for resources, leaving women more vulnerable to violence.

Women are often denied education and an equal voice in civic decision making which may have led to tragic examples like Bangladesh in 1991, when the women outnumbered men by 14 to 1 in the 140,000 people who died from the flood-related effects of Cyclone Gorky, partially due to insufficient access to information and early warnings.

Women in the US aren't exempt either from environmental threats. All of us here in America, men and women alike, are exposed to toxic chemicals in our daily lives. But studies have revealed unexpectedly high levels of little-known neurotoxic chemicals in women's breast milk, placing an even higher burden on women as they try to do their best for their babies. Breastfeeding is still considered the healthiest start for our children, but worrying about passing on toxic chemicals to a nursing infant isn't something new mothers should have to go through.

What gives me an enormous amount of hope when I read these kinds of stories, is that while women may be disproportionately suffering from the pollution of our planet, we're also at the forefront of stopping it. I'm inspired every day by the many courageous women out there who aren't willing to stand by and watch their homes, health, communities, and livelihoods be destroyed.

An important step to achieving gender equality, is having role models that women can to look up to. We must share stories of their power in order for other women to understand that this power belongs to them too. Here are just a few of those who've inspired me recently.

In Flint, Michigan, it was often the watchful eyes of moms that noticed their children becoming forgetful or struggling to find words they would normally use. We now know these were signs of lead poisoning from the city water supply, though the authorities insisted that the water was safe. Facing unknown health impacts, folks in Flint are rightfully demanding clean water, new water pipes and long term healthcare. Nayyirah Sharrif and Melissa Mays are two incredible women working tirelessly in Flint right now to organize a community that's been irreparably poisoned by their own water. Follow Flint Rising and Water You Fighting For to find out how you can help them.

Last year's fight to stop oil drilling in the Arctic brought together one of the most beautifully diverse movements I've seen in years, with women from all over the US and beyond playing crucial roles. There's something pretty messed up about companies like Shell seeing the receding Arctic ice caps (that are melting because of global warming) as a way to access even more oil. Especially when we know that climate change is going to hit women harder. Resistance to this madness came in many forms, from the Raging Grannies in Seattle, to a female Indigenous hiphop artist in Alaska, to brave young women who climbed oil rigs and hung off bridges, all saying "sHell No" to Arctic drilling.

Another critical piece in the puzzle when it comes to gender equality is to make sure we are giving women the space participate as citizens or activists. Giving our time and skills to a cause we care about can be incredibly rewarding, but with women still earning less and doing more housework than men, time and energy are precious commodities. As a single mom, I have been incredibly lucky to live in shared housing compound with friends that support me. I literally couldn't do my job of leading Greenpeace and raise my daughter without this community. Not everyone is as fortunate, which is why I believe that many of the solutions to gender inequality are also key to solving many of our planet's problems.

We need to challenge systems and practices that give rise to inequality and injustice in all its forms - like the dangerous erosion of voting rights in this country. If we could count on equal pay, shared housework, adequate childcare, access to reproductive healthcare, and flexible working hours, not to mention safe, clean water, I can only imagine how many more strong, vocal, active women would be able to speak up for their communities and for those in communities less fortunate than them. Surely, for the sake of our daughters and our planet, that's the ultimate win win.