There are about 500 million small-scale farmers on Earth, and most of them live on less than $1 a day. That's half a billion people laboring below the global poverty line, surviving and sometimes struggling to improve their harvests. They're often separated from larger population centers, or lack the means to educate themselves on specialized farming methods, or run up against natural and man-made obstacles that leave the futures of their farms in jeopardy. In these situations, knowledge is as valuable a tool as a shovel, a seed or a plow. But whereas the internet is readily available to Western nations on the grid, farmers in Africa and parts of South America operate on a digital deficit.

That's why WeFarm calls itself, "The internet for people without the internet."

Founded in 2014, WeFarm is a free, peer-to-peer service designed for farmers living around the world. It enables farmers to share information with each other via SMS (Short Message Service), or text messaging. WeFarm translates and connects queries from continent to continent, and has thus far provided more than 100,000 answers to its 43,000 registered farmers. 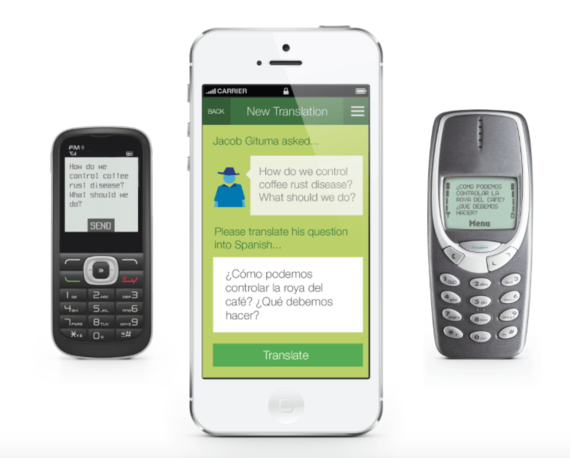 WeFarm CEO and founder Kenny Ewan developed the service after spending seven years working in sustainable agriculture with indigenous communities in Peru. Many of the communities he lived and worked in were remote and without regular access to the internet, which left them isolated from their neighbors. Ewan was largely concerned about the effects of climate change on the region, and how global warming will necessitate a change in harvesting techniques.

Today, over 97 percent of scientists agree that global warming will increasingly impact the way human beings live. Developing countries will be hit the hardest of all, making them the critical locus for climate adaptation strategies.

According to Zoë Fairlamb, WeFarm Comms and PR Manager, the idea for a peer-to-peer service came to Ewan when he saw how innovative certain farmers could be when meeting the challenges of climate change. "Kenny noticed, quite soon on, that people could come up with these low-cost, ingenious solutions, but farmers five miles down the road wouldn't have heard about what these people were doing," she told Planet Experts. "So that prompted him to think about communication and really pose the question, 'Why isn't there a global resource for information on agriculture?'"

Ewan began the process of creating that resource in 2009 when he joined Cafédirect Producers' Foundation (CPF), a UK-registered charity that works with smallholder farms and their organizations.

Connecting Farmers and "Changing the Conversation"

Internet connections might be less common in the developing world, but mobile technology is pervasive. GMSA estimates that there are 7.5 billion mobile connections, and 3.7 billion unique subscribers, worldwide. By comparison, a little more than a third (36 percent) of the planet is online. In Africa, many countries have leapfrogged landline technology and gone directly to mobile phones. According to Pew, some 90 percent of adults in Nigeria and South Africa own cell phones (mostly "basic feature" phones capable of calling and texting).

Indeed, for most Africans, SMS technology is already an invaluable tool. In 2007, Vodafone launched M-Pesa, a mobile phone-based money transfer system, for mobile network operators in Kenya and Tanzania (the "M" stands for mobile, the "pesa" is Swahili for money). It was the success of mobile tech like M-Pesa that spurred WeFarm to make its initial launch in Kenya in February 2015.

"In East Africa, people are very used to using mobile technology for other services," said Fairlamb. "There's also a very strong culture in Kenya and Uganda of people sharing and giving. People trust one another and want to share and help each other."

In 10 months, WeFarm registered about 33,000 Kenyan farmers with its service. "People love it," said Fairlamb.

The ultimate goal is to create a global network for small-scale farmers in Africa, Asia and Latin America. As Fairlamb explains, "Basically, a farmer can register on WeFarm's service completely for free just by sending an SMS message to our national number. Once they've signed up to the service, they can then ask any question regarding farming and we distribute that question to other farmers locally, nationally and internationally, and the farmer who asked the question should receive between three to five crowd-sourced answers within a couple of hours without having to leave their farm, without having internet access and without having to spend any money." 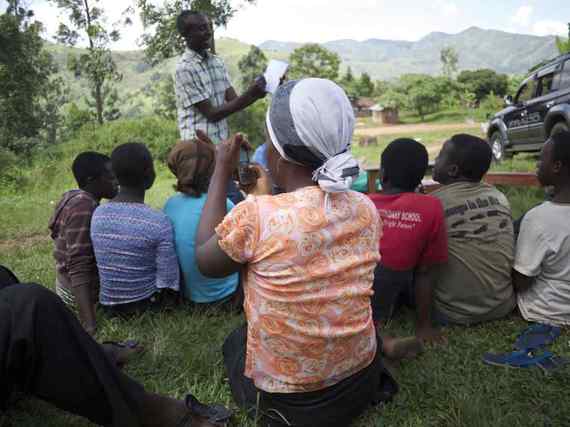 It's a fast, free and convenient solution for farmers on the edge of developing infrastructure, yet marketing the service proved an initial challenge. By definition, these unconnected farmers are scattered and separated, remote and difficult to reach. "We've had to be quite inventive in solutions of ways to reach these people," said Fairlamb. Part of that has been making use of CPF's farming network and training farmers to become WeFarm ambassadors, which then go out and train others in turn. The most successful method for getting the word out, however, has been radio.

Interviews with radio presenters on both the local and national level have had incredible results, said Fairlamb. "There was one occasion where we did a national radio show and within the space of an hour we had 4,000 people sign up to the service. It was really exciting seeing everyone registering that quickly."

WeFarm's Uganda network has also shown promising growth. After launching in late November, they had already signed 2,500 farmers by mid-December. A Peru launch earlier in the year has also added invaluable insights to WeFarm's information network. "We're seeing some amazing things, pieces of advice, coming through the system from Peru," said Fairlamb.

The growth of the service in Africa alone has been extremely gratifying for the WeFarm team. "I think Kenny [Ewan] would say that it wasn't a surprise but maybe a relief just how much farmers use it and how much they value it," said Fairlamb.

"There were a lot of people who questioned the peer-to-peer model, but that's the core of the business. There's kind of a widespread approach in international development circles whereby people kind of assume and think that people who are living in poverty need to be told what to do. WeFarm wants to be about changing that conversation and giving these people a voice, showing their knowledge is valuable and giving them a way to share that information.

WeFarm's next big launch will be in Côte d'Ivoire. A Tanzania launch is forthcoming, as are launches in India and Brazil.

Though a humanitarian endeavor, WeFarm is also a for-profit business. Yet it's a business that is following the growing economic ethos that profit is not divorced from doing good.

The social good of the WeFarm SMS service is giving farmers the means to communicate with each other and share techniques and strategies for improving crops and adapting to climate change. That service is free, so the revenue comes from the wealth of insight that emerges from that communication. Still in the pilot stage, WeFarm hopes to sign up businesses to a monthly service that provides disaggregated data about what's going on in their various supply chains.

As Fairlamb explains, "Small scale farmers are responsible for producing 70 percent of the world's food, but the majority of corporate food and drink businesses, retailers, any kind of consumer brand that has small scale farmers in their supply chain, has next to no visibility as to what goes on in that bottom rung. So we offer a service to these types of businesses that enables them to improve supply chain sustainability, make better decisions and help the people who are producing the products that they rely on." 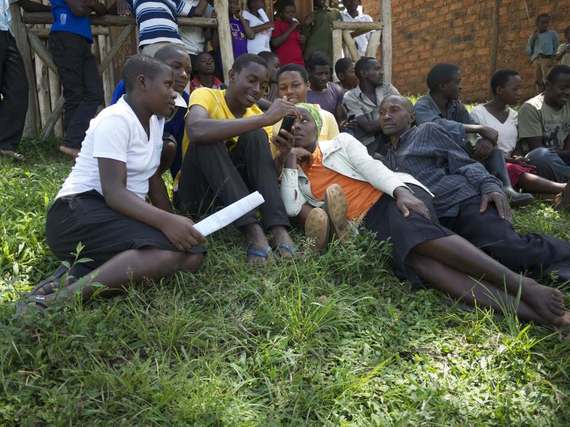 For a tea company, that might look like, "What are the top three questions that tea farmers are asking this month?" or the top two crops that tea farmers are looking to diversify into. Disaggregated data from WeFarm can also help identify challenges facing various farmers and techniques for overcoming them. WeFarm is also interested in providing lead generation and SMS advertising for more local businesses.

"Constantly on the system we see people asking questions about 'where can I find this type of seed' or 'where can I buy a solar panel,' 'I'm interested in a micro-finance loan, how do I go about finding that?' We're quite well positioned to be able to connect these farmers to the products and the services that they're looking for," said Fairlamb.

WeFarm is currently seeking investment to scale up their operations and connect a million farmers by the end of this year. Thus far, the company has received £500,000 in seed funding from Google.org and Wayra, Telefonica's incubator. WeFarm recently opened its Series A funding round and is seeking £2.3 million in investment. To learn more, visit the company's website and Facebook page.