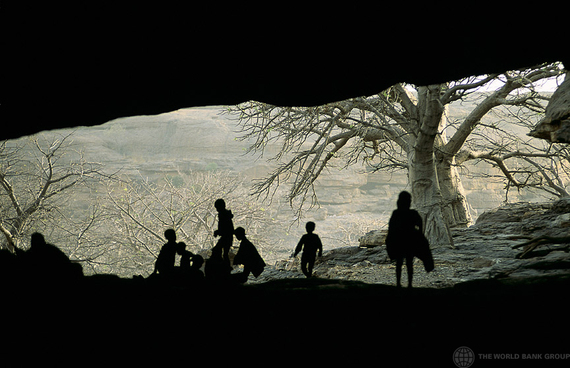 For the first time in history, the number of people living in extreme poverty has fallen below 10%. The world has never been as ambitious about development as it is today. After adopting the Sustainable Development Goals and signing the Paris climate deal at the end of 2015, the global community is now looking into the best and most effective ways of reaching these milestones. In this five-part series I will discuss what the World Bank Group is doing and what we are planning to do in key areas that are critical for ending poverty by 2030: good governance, gender equality, conflict and fragility, creating jobs, and, finally, preventing and adapting to climate change.

By 2030, more than half of the world's poorest people will live in very poor countries that are fragile, affected by conflict, or experience high levels of violence

These are places where governments cannot adequately provide even basic services and security, where economic activity is paralyzed and where development is the most difficult. It is also where poverty is deepest. The problems these countries face don't respect borders. About half of the world's 20 million refugees are from poor countries. Many more are displaced within their own country.

Some countries have low levels of violence but get stuck in "fragility traps" where the threat of violence results in stalled development. Countries such as Central African Republic, Mali, Haiti, and Sudan have been in constant struggle with fragility over the past 20 years.

Conflict and fragility reverse hard-won development gains. It takes a high economic toll globally -- about $14.3 trillion in 2014, or 13.4 percent of the global economy. Conflict claims lives, uproots families and accounts for 80 percent of all humanitarian needs, according to the United Nations.

Clearly, the world can't end extreme poverty without better tackling these challenges. Our work in 29 of the world's poorest countries is focused on finding and delivering solutions that have real impact.

Here are a few ways we are helping.

Violence is growing and becoming more complex. The number of ongoing conflicts increased to 50 in 2015, up from 41 a year earlier. Terrorist incidents are up 120 percent since 2012. It's increasingly critical to pinpoint the underlying causes of fragility and violence and try to defuse them.

The drivers of fragility include economic and regional disparities, uneven development, land-use conflicts, lack of transparency in natural resource governance, and lack of opportunity and jobs.

We're conducting "fragility assessments" in countries, along with economic and social analysis, to better address these issues.

For example, projects in the Great Lakes region of Africa are using best practices and lessons learned from what we've done in the Democratic Republic of the Congo and Cote d'Ivoire to address the prevalence of gender-based violence at regional border areas.

In the Solomon Islands, the Rapid Employment Project hired 12,000 young people from vulnerable communities and created 664,000 days of employment to build infrastructure and support 1,200 small projects in the capital of Honiara

Our goal is to design programs tailored to address specific fragile situations, while strengthening government institutions so they become accountable, and also strengthening the ability of civil society to hold them accountable.

For example, we are helping Central African Republic rehire civil servants and rebuild public sector institutions following two years of political insecurity and the displacement of one quarter of the population.

We face an unprecedented crisis of forcibly displaced people in the world today, driven by conflict, war, and persecution. Almost half of refugees worldwide originate from Syria, Afghanistan, and Somalia. Large numbers of refugees have also fled Sudan, South Sudan, DRC, Myanmar, Iraq, and Eritrea.

We are assisting internally displaced people and refugee host communities in the Great Lakes, Horn of Africa, the Sahel, and the Middle East. In the Central African Republic, we financed critical activities to address a food crisis and build food security in 2014, after a large number of people were internally displaced as a result of instability and violence. About 150,000 people benefited from the project that distributed 5,005 metric tons of food and increased seed production by 371 metric tons.

We'll work closely with countries and other partners to strengthen evidence-based dialogue and programming that helps alleviate the tremendous stress on displaced populations and host countries.

We will continue to develop and improve our investment and operating model, so we can respond timely and flexibly but also achieve lasting and effective results.

We're working with organizations such as the United Nations and the European Union to reach those who need help in fragile, low-income countries struggling with unstable political settlements, weak institutions and strained social contracts.

World Bank Group President Jim Yong Kim and UN Secretary-General Ban Ki-moon jointly travelled to the Great Lakes, the Sahel, Horn of Africa, and Middle East in the last three years to meet with leaders, seek solutions to development challenges, and a path to progress.

We also partner with the UN on analytical work to strengthen security and justice approaches, for example in Liberia, where the Bank and UN worked also together to respond to the Ebola crisis and help the affected countries recover.

Partnerships with non-governmental organizations, the private sector and others have allowed us to make progress amid insecurity. In Afghanistan, 31 partners including the World Bank have supported grassroots development through more than 33,000 democratically elected community councils. The councils identified 86,000 small-scale projects to improve water supply and sanitation, rural roads, irrigation, power, health and education between 2003 and 2015. The program has generated over 52 million days of work for skilled and unskilled workers.

We cannot end extreme poverty without making progress in countries affected by fragility and violence. What will it take to break the fragility and conflict trap? We know that success will be much more likely if we stay involved, confront the drivers of conflict, and encourage accountable public institutions that can deliver security, justice, and jobs.