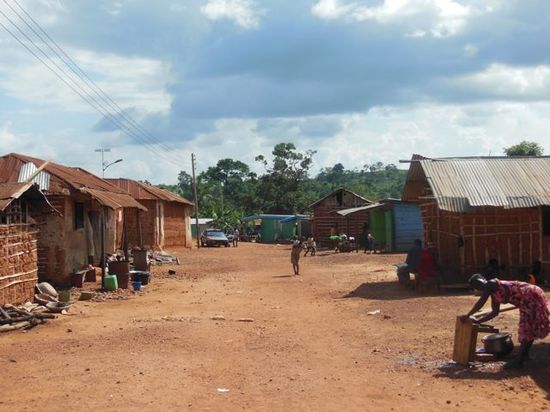 The village center of Nkontomire, Ghana, where I lived this past summer

I had planned to avoid talking about LGBT issues during the two months that I spent living in a rural Ghanaian village called Nkontomire this past summer.

Back in the U.S. I am a local LGBT activist and president of my college's LGBT group, and I identify as gay. In Ghana, however, same-sex relations between men are criminalized, and LGBT people live in constant fear of violence or being outed to the police. Given this and the fact that I needed to be accepted by the people of Nkontomire if I was to work with them to develop socially innovative businesses, silence on LGBT topics seemed like my only viable option.

But after just a week of living in Nkontomire, one of the women in the village asked me, "Why is Obama for the gays now?"

The next day my host brother said, "Last night Obama spoke in Senegal. He said that Africa should embrace the gays, and if we don't, we won't get American foreign aid." He paused and then asked, "Why did he say that?"

For the rest of my time in the village, it became impossible for me to have a conversation about the U.S. with the villagers without talking about why Obama supports LGBT people, and why he is supposedly cutting foreign aid to African countries that criminalize LGBT people. And I observed that instead of providing an incentive for Ghanaians to accept LGBT people, this policy encourages Ghanaians to antagonize them.

"Gays are hurting Ghana," one community member told me. "We are losing money now because of them." Another community member said that it is better for Ghana to be poor than for the country to accept the gays. I quickly realized that if the goal of Obama's policy is to encourage acceptance of LGBT people, it is having the exact opposite effect in Ghana.

But as I found out after I arrived back in the U.S., no such U.S. policy exists.

Unfortunately, the Ghanaian media, and the Ghanaian people as a result, think otherwise. The Obama administration announced in 2011 that it would use diplomacy to promote LGBT rights around the world, but that this would not mean cutting or tying foreign aid to changes in other nations' LGBT policies. A few days later Modern Ghana reported, "The imperialists are at it again. This time, they are threatening to cut foreign aid to countries, including Ghana, that have refused to legalize same-sex marriage." The media of many other African countries issued similar statements.

A few months before this, UK Prime Minister David Cameron had pledged to slash foreign aid to African countries with poor records on LGBT rights. Clearly, some African media have conflated the U.S. policy with that of the UK.

Though this misconception about U.S. foreign-aid policy began two years ago, the Ghanaian media continue to perpetuate it. For example, this past June, a day after the U.S. Supreme Court overturned a key section of the Defense of Marriage Act (DOMA), Obama spoke about LGBT rights during his visit to Senegal, stating:

I think the Supreme Court ruling yesterday was not simply a victory for the LGBT community; it's a victory for American democracy. I believe at the root of who we are as a people, who we are as Americans, is the basic precept that we are all equal under the law.

Nowhere in his speech did he mention cutting foreign aid to African countries, yet that is what the radio in my village reported.

Cameron's foreign-aid policy and the falsities presented by the African press only contribute to this demonization of LGBT people. If there is one thing that I have learned from my past activism, it is that punishing people will not get them to change their views for the better on LGBT rights. Retribution rarely reforms.

A more effective way of bringing about change is engaging people in a constant dialogue on these human-rights issues. To accomplish this on an international level, more money, not less, should be given to anti-LGBT African countries in order to fund grassroots LGBT organizations within those countries. The majority of progress in international LGBT movements must come from the bottom up, not from the top down. Fortunately the Obama administration set aside $3 million to fund LGBT organizations in other countries back in 2011, but more countries need to have policies like this.

But money alone won't solve this problem. In order to help calm the rising homophobia that I have witnessed, the Obama administration must take immediate action to reach out to the African press and correct the lies that continue to be broadcasted. And if the UK really does want to help promote LGBT rights around the world, then it needs to carry out a serious investigation into whether Cameron's foreign-aid policy is actually doing that.