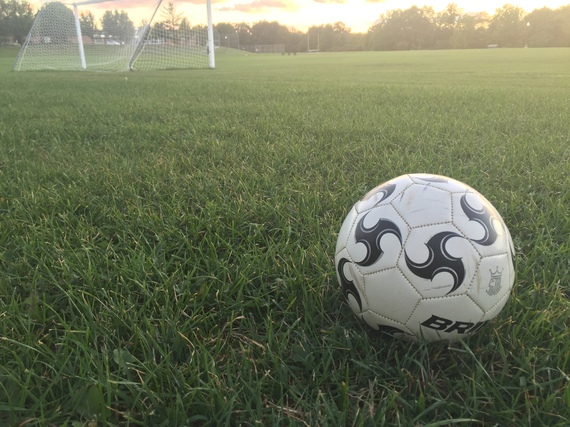 The air was still.

Along a sidewalk and a row of ornamental trees separating a parking lot from an expanse of green fields, parents stood and squatted against trees and paced, waiting.

After three days of tryouts, cut day had arrived.

They say having a child is like having your heart walk around outside your body. For these parents, their hearts sat a hundred yards away in a circle of tween and teen girls, adorned in shin guards and Under Armour tees, all awaiting news of their fate.

Moments before, these girls had been playing the beautiful game, running, passing and kicking. Then the play stopped, and they were told to get their bags and gather at the far goal.

A precocious one who was not my daughter, but was bursting with spunk and spirit, found her dad from half-a-field away among the anxious gathering crowd as she jogged to her bag on the sideline and yelled, for everyone to hear, "They're going to tell us if we made it now!"

For a moment, her innocent admission broke the tension, and some parents smiled.

Then, reality set in again. And over a thirty minute stretch that felt like a year, these girls who'd played soccer since kindergarten were called one-by-one and walked with trepidation toward a bench at midfield where a coach with a spreadsheet waited. There they were either handed a slip of paper detailing the upcoming practice dates, or they had their little girl dreams of soccer greatness extinguished.

Depending on the news, the young ladies either floated and skipped the remaining fifty yards to the awaiting arms of a jubilant parent, or sulked paperless in a long, meandering walk looking for a comforting face, some bursting into tears when they found one, others just wandering into the parking lot stunned.

Let me just say at the onset that cuts suck. Especially for middle schoolers.

As I sat there, leaning against a tree, looking for my daughter's distant profile among the gaggle of girls, I actually said a prayer that when her name was called, I'd see a slip of paper in her hand. An actual prayer. Like there's patron saint of modified soccer teams, or something.

I know there are some who praise the virtue of cuts and of cut-throat-competition. This is the fire that can forge greatness. Michael Jordan was cut once, you know. And, kids are tough.

One wise friend put it differently, saying that the sooner young people can be disabused of athletic prowess the better for the development of other actual skills.

I get that even more.

But I come at it from another angle. I know the potential positive impact of sports on a young person. I also know how many young women leave sports behind in the tween and early teen years. And I know that, at least statistically, not having the influence of sports or other extra-curricular activities can hurt their odds of making it through the minefield that is adolescence.

Maybe I'm an idealistic fool, but I think every middle school girl who wants to play soccer should be able to.

Sitting there against the tree, as I watched too many young girls and their parent bawl, I got a little angry.

The anger wasn't for the coaches. They have to field a team. And they are told how many they can have on that team.

It certainly wasn't for the kids. They just want to play.

Nor was it even for the school, necessarily. It's a good school and a lot of families move here to attend it. Some years, that means more kids trying out for the middle school soccer team than can reasonably fit on the field or be kept on the sideline.

No. The anger was for parents. Not the parents waiting for news, but for parents in general.

Dreams of success, and scholarships, and unfathomable greatness have driven parents to do ridiculous things.

Ask any high school athletic director or college coach what a young person should do to improve their athletic abilities and they will say, play multiple sports. If they're truly honest, they might tell you not to bother. That the raw ability needed to succeed at a higher level is more rare than most believe. And that full-ride scholarships are even harder to come by.

The truth is, the odds are stacked against all of our kids, when it comes to athletic greatness. One exceptional kid in the school district in a given sport might get a partial scholarship to a little known college. Or they might not.

And the chances of making the Olympics are almost non-existent. No decent parent would wish that life on their kid, anyway.

All we should reasonably expect from sports is a positive experience that instructs about teamwork and hard work and overcoming obstacles.

But that doesn't stop parents. Despite the facts, and the odds, and the best advice, the well-meaning parents of athletically mediocre kids train year-round in a given sport, from kindergarten on, for that one-in-million chance at greatness.

They do it in every sport, not just soccer, or baseball, or gymnastics. And not just your typical sports. They do it in dance, and theatre, and swimming. These days, all kids train like they are Olympians. And their parents fork out big bucks on training sessions, travel teams, special programs and camps.

It is making it impossible to have a healthy and sensible approach to any activity. Because, to have a chance, you have to do the same. You have to, or else you simply cannot play.

Then, one day, too many of these over-trained, overinflated kids end up on the same middle school soccer field vying for fewer positions than there are young people vying for the honor.

And, bam. Dreams are dashed.

It's the parents fault. Not the parents on that field on cut day. But all parents. Even me.

That day, I saw too many kids cry. It angered me.

That precocious girl who was not my daughter who yelled out to her dad; She got cut. She cried. Her dad held her and walked her to the car, dumfounded.

Then my daughter's name was called.

The air was still.

They say having a child is like having your heart walk around outside your body. It is true.