Six years ago, Peter Guinta and his wife decided to leave their megachurch in Orange County because they wanted a place where they could "be known and know others." Peter felt like a spectator in the 6,000-member church and wanted to "feel part of something, not just be a face or number."

The Guintas decided to try out a small church plant in downtown Long Beach called The Garden. The start-up congregation was 100 times smaller than their previous church, but they were attracted to The Garden's emphasis on transparency and meaningful relationships among congregants. He saw it as the right combination of first and twenty-first century Christianity. 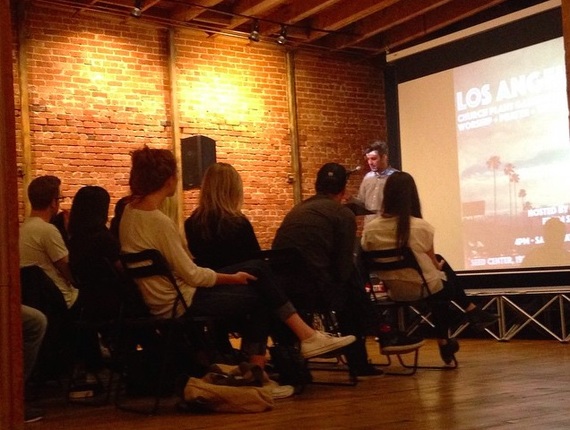 "What worked in the 1980s doesn't fly with our generation," he told me. "Our generation is looking for real relationships, they are looking for a place when they can say, 'I'm part of this, I'm not just a number.' ... What we are realizing is that maybe the Bible had it right when the model was small."

But The Garden hasn't stayed small.

More than 500 people now regularly attend its Sunday services and the church's building fund is growing every month. A dynamic pastor leads The Garden, close to 70 percent of the Sunday attendees participate in a small group, the church is attracting young families, and it has a growing financial base. All indicators point to continued growth.

"Sounds like you are on the path to becoming a megachurch?" I asked Guinta.

He leaned back on his chair, laughed, shook his head and said, "God help us!"

Backlash may be too strong a word, but a growing number of evangelicals are not convinced that bigger is better. How the churches that appeal to this group handle growth will have a lasting impact on how churches are structured.

Resistance to the megachurch model is based on the assumption that there is an inverse relationship between the size of the church and the depth of the relationships among members. Many evangelicals in their 20s and 30s believe that the bigger the church, the more difficult it is to have genuine and authentic relationships with other church members and church leadership.

Eliot started attending The Garden around the same time as Peter, when the congregation was no more than 50 people. "I just think that my heart really longs for the church to experience what I experience in AA (Alcoholics Anonymous)," he told me. "In AA, if you're going to too many speaker meetings, where there are really large bodies of people, let's say 100 people, and there's one speaker and that's all you're doing, you eventually will get drunk. So I think big churches are great; I just think there's a real need for engagement, community and responsibility to people. You get lost in those big, big places."

The Garden's leaders, like many evangelical leaders, are now faced with the challenge of growing without losing their small church feel. "We're going to grow into a large church, I think, but it won't look like just a big building with lots of people," said The Garden's lead pastor, 30-year-old Darren Rouanzion.

In 10 years, Rouanzion told me, "I think we'll have lots of churches. I want to start a family of churches all over Southern California.... I see us starting a network of church leadership, a network of churches really. I think the future is interdependent church networks where we're sharing the same story, but there's local autonomous leaders and shared resources."

Such networks -- not traditional denominations or single-site mega-churches -- are the future of Protestantism, according to sociologists Brad Christerson and Richard Flory in their forthcoming book, The New Charismatics: Networks, Social Transformation, and the Future of Protestantism. Macro-level social changes, including globalization, growing pluralism and the digital revolution, have given competitive advantages to religious groups organized by networks rather than by traditionally organized congregations and denominations.

The network form of governance allows innovative individual leaders to experiment with unorthodox beliefs and practices without regulation from governing religious bodies, while at the same time facilitating collaboration with other like-minded individual leaders across the globe to expand the scale and influence of their ministries. The book claims that network forms of governance results in religious groups that are more experimental and more focused on practice rather than theology. This structure allows believers to customize their own religious practices to a greater extent than what is possible in a traditionally organized congregation or denomination.

American Protestantism is changing. While traditional denominations and megachurch models are not obsolete, congregations like The Garden will serve as experimental sites of new organizational models for Protestant churches.