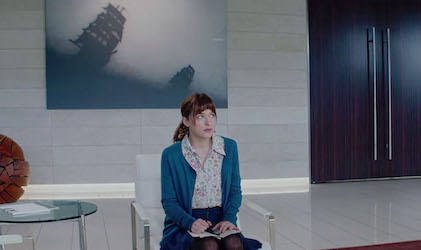 Have you thought about the effect that this film may have on young girls -- how this film will set their expectations as to what sex is like?

Honestly, we haven't. We've been too distracted by our upcoming ladies night screening of it!

But it's a great question, and its implications are interesting.

First off, the movie is rated R. Of course this won't stop people under the age of 17 from seeing it, but we don't think all adult content should be banned because of the chance that it may get into the hands of some younger people who are not mature enough to process it. Parents and educators have to give their kids guidance about media, talk to them about the distorted fantasies, stereotypes, and violence they're bombarded with these days. Frankly, we're much more concerned about the effects hardcore porn has on young people's perceptions of how sex is supposed to be -- something, unfortunately, most kids have been exposed to. (Compared to the stuff they can find online, we're afraid this film will seem downright quaint to most of them.) Hell, advertising and women's magazines in the aggregate are much more worrisome than this single movie. Even scarier is the chance that young people will think that, due to its popularity, the Fifty Shades trilogy represents decent writing (we're only half joking here!).

One of the reasons we're so looking forward to the movie is to see how (or if) the female director, Sam Taylor-Johnson, a feminist-artist powerhouse, was able -- despite author E.L. James' resistance -- to transform the movie into a tale of female strength and empowerment. According to an article in this week's Time Magazine:

[Taylor-Johnson] thought she saw how to address the troubling power dynamic in the book: give the control to Anastasia. Put her in charge of her own odyssey. "This is the emotional journey of somebody who doesn't seem as strong as she becomes," she says. "And by the end of the story, she holds all the power." Taylor-Johnson wants to reclaim the sexual-submission fantasy for empowered women. "To be a feminist," she asks, "do you always have to be on top?"

A fantasy may be counterintuitive to the lady or gentleman you present yourself as in society. For instance, a feminist may fantasize about bending over a carburetor dressed in cheesy, scratchy lingerie with her hair teased, sprayed, and back-combed in the tackiest of styles. This is perfectly correct, for one's fantasies should not be bound by 'politically correct' mores. And no, seemingly hypocritical kinks do not necessarily reflect deep-seated repression, neuroses, or issues. As with dreams, fantasies may be inspired by something as shallow as the previous evening' televisions lineup or that summer's trashy beach reading (no matter what Freud said).

For a lot of women, the submissive fantasy is an effective one -- and you can't legislate people's turn-ons, despite the countless attempt made by righteous, religious conservatives (many of whom have secret Red Rooms of Pain in their own basements!). As far as we're concerned, BDSM and (self)respect are not mutually exclusive. As long as we teach young people how to make smart choices, be as safe as possible, understand the difference between fantasy and reality, respect each other, talk to each other, and elevate sex to a sacred level (even when it's casual), then it shouldn't matter if they eventually like to be spanked once in a while.

We've always tried in our own small way to be a part of that educational effort. In all our writing about sex and relationships, we've endorsed and emphasized comprehensive sex education, open communication, consent, and safety. As far as Fifty Shades goes, we've actually written about the ways we hope the film will improve upon all the troubling elements in the book: Christian's stalkerish abuse, Ana's total lack of any sexual experience, her lukewarm reaction to kink, her issues with eating, the dirth of well-adjusted kinksters, etc. They're improvements any viewer would benefit from, whether female or male, straight or gay, old or young. Hopefully the movie delivers, but with James fighting tooth and nail to stick to the original story, warts and all, for the sake of her fans, we're not holding our breath.

One thing's for sure, though: there will not be enough equal opportunity nudity! More male nudity in movies would go a long way to making the playing field even for women. And not just in the bedroom, but in all areas of life.

Check back here next week to see just how good or bad we think the movie turned out  -- not just for young people, but for us all.