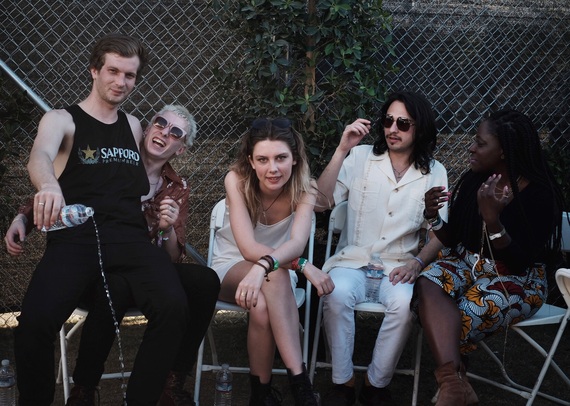 Wolf Alice has a sound that transcends the average alternative rock ears. Forming in North London, as a two person band to now a four-piece group, their fun eclectic sound created magic at the outdoor stage. Setting the tone as the quintessential festival moment. Sitting in the grass listening to Wolf Alice perform served as a highlight, for one of my most-epic Coachella Festival Moments. I had the chance to catch up with the band post performance to discuss the trick to playing festivals, and the secret to forming a successful group.

M: Take me through the whole creative process performing here at Coachella, did you take a different creative approach than you normally have in the past?

WA: I think it was a dream come true to play at Coachella. I'd only heard things about it. I didn't think we would get here quite so soon if ever. So yeah, it was amazing to play against such an incredible beautiful backdrop is unbelievable.

M: Let's go back a little bit. I want to fully get to know Wolf Alice better. I know the band started off with two and now you have four. How have you evolved as a band that is growing and doing well?

WA: We only really started with two in the sense that, it was just Joff and I. We wanted to play music we didn't know how where, or what and just kind of took an acoustic guitar around our local pubs and things like that. I think we wanted to be in a band, I just think we didn't know the right people so as soon as we found them, then we became Wolf Alice if you know what I mean.

M: How did you know it was the right people? That process can be such a personal thing in my opinion formulating a group to bring to life a creative vision, or maybe not?

WA: When something feels right, you can kind of tell there's a palpable energy. I know, I was the last one to join and I definitely felt really excited when I started playing the music in rehearsal. We don't want to sound to wanky but theres something about it. There is a certain energy.

M: What was the feeling you had coming off stage after your set-- was it a Yes I nailed it feel? Seeing that its still a fresh feeling right now post performing how do you feel?

WA: We wanted to black out from exhaustion.

WA: Well, people aren't necessarily your fans to start with. You have to kind of win them over so its always hard to tell. But, I feel like I still had a huge adrenaline rush and I was shaking a little bit.

M: How does that dynamic feel when you're on stage and you know that you are potentially bringing in a new audience?

WA: The visual aspect of it is like when you see people coming towards your stage its like Oh, Ok kind of like gear you up. If you see people leaving your stage your like Oh shit! I don't know, it was a bit of a blur I think this afternoon. There were a lot of nerves and excitement mixed in with extreme sunlight in your eyes for 45 minutes. You kind of bow the elements at these festivals. Like Ellie said, you're one of many you convey above yourself on to that stage and try and do your best.

M: Well, I will say this was the first day that I like sat down in the grass and listened to music and watched you your band perform. I will say, It was a good moment. Like a true Coachella moment that I haven't been able to have yet. Your voice collectively was soothing in a way. Where do you draw your inspiration from in terms of musically?

WA: A lot of things! The things that kind of tie us together are Jack White, Patrick Wolf, Pixies, Kings of Leon but then you know we don't think about it too much. I think things inspire us more than other peoples music.

M: Thats awesome! So, whats next? You just did Coachella which is like massive.

WA: We have two shows with Chvrches. Then we go to Las Vegas for a performance for the first time, so we'll probably all reenact the hangover. Then we do another show before weekend 2 of Coachella and then we are back here.

WA: Hyperdrive that's what we're in.

M: Thank you for your time. I truly had a great moment sitting in the grass listening to your band play.

WA: Awe, thanks for coming.

To keep up with Wolf Alice hyperdrive schedule go to http://wolfalice.co.uk @wolfaliceband 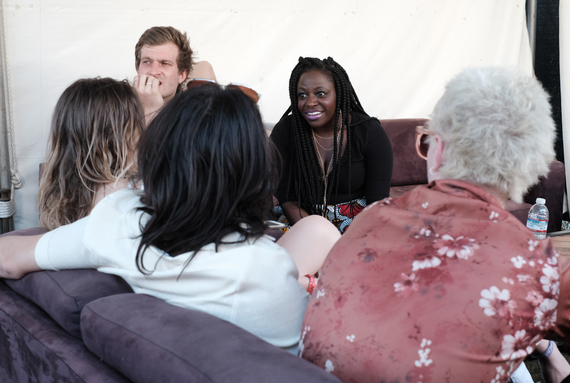