Girls and women often feel sexuality is their most prized possession, thanks to the messages they get through pop culture. But when they do own their sexuality, they are shamed for it, putting them in a double bind. "Nothing makes me feel less valuable than when someone calls me a slut." From offensive remarks on Twitter or Facebook, to using the word 'slut' as an excuse for rape, abuse, or violation, the word has become part of our lexicon and is now an acceptable way to devalue women.

In response to this growing epidemic, Katie Cappiello and Meg McInerney, founders of The Arts Effect All-Girl Theater Company, decided to take on this complex and multi-layered issue facing women and girls today, namely slut culture, slut shaming and the culture of sexual violence against women.

The concept for SLUT: The Play evolved from a weekly creative workshop at the theater company where the teen members began speaking about the word "slut" and the concept of "slut shaming." It was revealed the word was being used as a barometer of female sexuality, a measurement of female status and self worth. 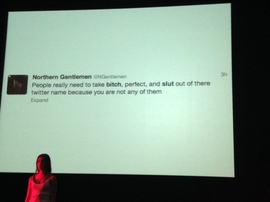 Through months of discussion, intensive acting training, improv and reflective writing, SLUT was born out of the need for a safe platform to expose the damaging language, shame, and deep-rooted sexism that fuel rape culture. "The girls are the experts on these issues, our job is to create the space for them to explore the challenges they face and bring them to the surface," says Katie. "And after hearing about the events in Steubenville, the rapes in India and Cairo, and the tragic suicides of Audrie Pott and Rehtaeh Parsons- teen girls who had been raped, then brutally slut-shamed, the timing for this work became even more relevant and important." 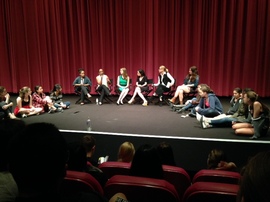 For anyone who has seen the play, during productions in NYC, LA or Fargo, they know the work is thought-provoking theater. Gloria Steinem says, "SLUT is truthful, raw and immediate! See this play and witness what American young women live with everyday." Raw and truthful it is, engaging communities in a dialogue. The show is accompanied by a panel discussion and Q&A following the performance, giving audience members a much needed chance to share feelings, personal experiences, and discuss ways to ignite change.

The positive energy around the play inspired Katie and Meg and their team of students to launch StopSlut, a youth-driven activism movement focused on ending sexual shaming and transforming rape culture through cultural expression. To date, the movement has reached over 5,000 students nationwide through StopSlut workshops, where both young women and men have a space to listen to each other and discuss issues of sexuality, bullying and sexual violence. It has also led to the establishment of StopSlut Coalition Chapters in schools across the country that develop custom-tailored plans of action for combating slut shaming and rape in communities.

Katie and Meg go on to describe a StopSlut workshop where a teen girl asked how many girls in the room had be involved in an unwanted sexual experience. When all of them raised their hands, the boys in the room were shocked. "Awareness alone can be a game changer for these teenagers." Through these open conversations, solutions are co-created like the concept of affirmative consent. "It can't just be the responsibility of the girl to say NO, both parties need to say YES. Responsibility for consent should fall on both people involved in a sexual experience." Things like the accessibility of porn, or sexualization of teen pop idols like Miley Cyrus, and other influencers on slut-culture are all explored through dialogue during StopSlut events.

"For us, the project goes far beyond the play, we're working to inspire a movement that will shift the tide. Our goal is to provide concrete tools that empower communities and individuals to spark change in the attitudes and practices around girls and sexuality. So, with our partners at the Feminist Press, we're releasing SLUT: A Play and Guidebook for Combating Sexism and Sexual Violence on February 10, 2015, we're launching our StopSlut College Campus Campaign- over 10 colleges (including Harvard, MIT, University of Montana, and Vassar) have signed on to perform SLUT on their campuses, and we're touring the play and workshops in Boston, DC, and San Francisco. And that's just the beginning."

Katie & Meg are excited about the future of SLUT, and the StopSlut movement, and the impact they can make. "We're both passionate about education, women's rights, and empowerment. The concept behind The Arts Effect is that it combines our love for theater, education, and social change- we want to reach as many young people (and adults) as possible with our work."

When asked about what they've learned along the way about being women entrepreneurs who are making a difference, they enthusiastically respond with the following advice: Learn to say YES and take risks, even when you don't know what the final outcome will be. Stay true to your heart and follow your passion. Don't apologize or feel bad about making money by doing good work that is good for the world. And lean on your mentors.

To learn more about upcoming shows and how to become involved, visit www.StopSlut.org. Get activism kits, put on the play, build coalitions in schools, and purchase Katie & Meg's soon-to-be-released book SLUT: A Play and Guidebook for Combating Sexism and Sexual Violence.