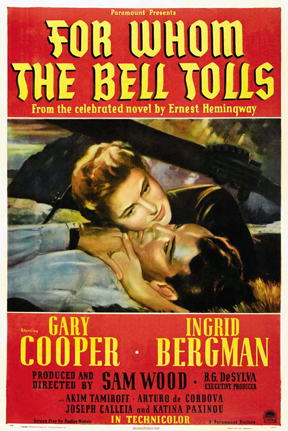 A film poster for the 1943 film, For Whom the Bell Tolls, starring Gary Cooper and Ingrid Berman. (Copyright Paramount Pictures, 1943) Ernest Hemingway's great war novel, For Whom the Bell Tolls (1940), which was made into a blockbuster Academy Award-winning film with the same title (1943), contains one of American literature's most celebrated creations in its protagonist Robert Jordan.

Through Jordan we learn what it means to be an American hero by an author who many saw as an authentic American hero himself. So conscious was Hemingway that Jordan represented the best virtues of being American -- he is brave, courageous, compassionate, and stoically sacrifices his life to fight injustice -- that he insisted Gary Cooper, who had made his career playing the classic American heroes, take the part.

In the story, Jordan has come to Spain to kill Franco's fascists and blow up his bridges in what we would describe today as "terrorist acts". The story does not last more than a few days but contains several levels of meaning at the center of which is a love story between Jordan and a young Spanish girl called Maria. For Hemingway, Maria embodies the land of Spain and the hope for the future - her eyes sparkle when she looks at Jordan, her hair is golden and Jordan runs his fingers through it although it is cropped from the time the fascists shaved her head after raping her, and even her young breasts which are described as "little hills" - and Jordan's love for her symbolizes the love of the American for the land and its cause. Just as he wanted Cooper for the male lead, Hemingway met and invited the fresh-looking Ingrid Bergman to play Maria. 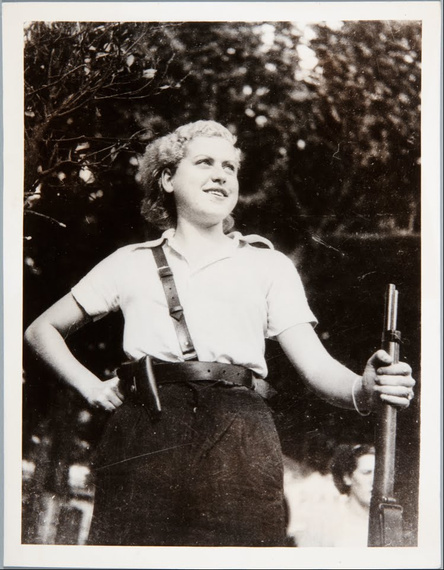 A woman defends Barcelona in 1936 during the Spanish Civil War. (Source: wikipedia.org)Hemingway had consciously projected Jordan as embodying a central concept in Western society which is to battle for the idea carried in the title, For Whom the Bell Tolls, a line from a poem by John Donne, the English poet.

The answer is the bell tolls "for thee." The poem includes another well known phrase, "No man is an island." Hemingway is arguing that we are all -- irrespective of religion and color -- interconnected as part of a larger human civilization with values that are universal and must be protected even if it involves violence. The fictitious Jordan is not the only American who is drawn to the battle between the Republicans and the Fascists of General Franco and his fascist allies in Germany and Italy; some three thousand Americans actually turned up to volunteer in the fight against the tyrant in Spain in the late 1930s. What would Robert Jordan do today against the tyrant President Assad of Syria? Not much. There is a difference in the political and cultural context in the two situations. If Jordan did what came so naturally to him when he left for Spain he would be branded a "terrorist". Volunteers from America are specifically barred from leaving the US to join the battle in Syria against Assad. If they do go, as some have, or try to, they are called terrorists and are subject to arrest, persecution and risk losing their citizenship. So Assad, backed by foreign forces, has butchered over 300,000 civilians and driven out some four million to seek shelter in foreign lands and over seven million to escape from their bombed-out homes with impunity. Still he survives. The Marias of Syria wait for Robert Jordan to come to their aid in vain. 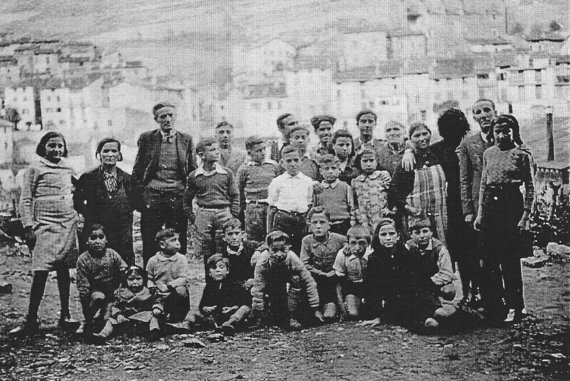 A group of Spanish Civil War refugees at a children's home in the French Pyrenees. (Credit: War Resisters' International and the Brocca family; wikipedia.org) A juxtaposition of these two events from history challenges Hemingway's idea of America as the champion of democracy, human rights and justice. Indeed the irony of those American presidential candidates who would call the Syrian victims of Assad - the Marias - escaping from the slaughter "rabid dogs" and deny them refuge, even to orphan children, seems to have escaped them. Hemingway would have been distressed at America's abdication of its role and, because he would have understood its implications, despair at the depth of the loss.