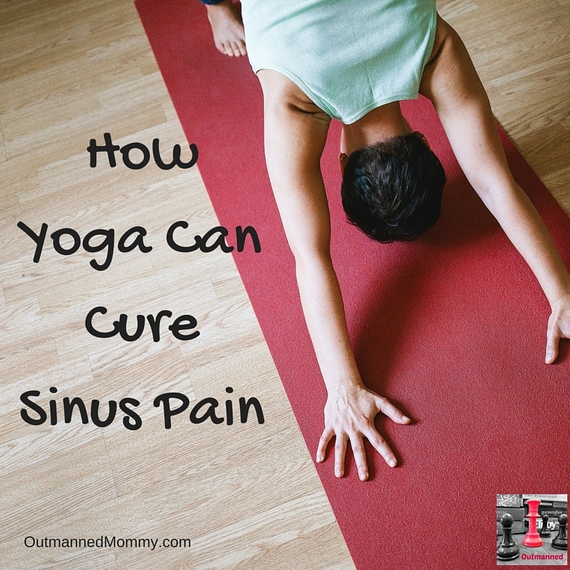 Recently I suffered from a sinus and double ear infection that left me shattered and huddled in a dark room reminiscing about how pleasant natural childbirth had been. I tried Tylenol, Ibuprofen, Sudafed, and ritualistic sacrifices, but nothing eased my suffering. I made the rather inconvenient journey to the convenient care center on a Sunday, where I received an arsenal of antibiotics and prescription pain killers which barely took the edge off the pain. So in a desperate, Codeine-induced stupor, I decided to distract myself with some yoga (it sounded reasonable to my drug-addled brain).

I poured myself from my recliner and struck a pose -- a few poses, actually: downward dog, child's pose, and standing forward bend, to be exact.

Half an hour later, the pressure in my head had subsided from a nuclear meltdown to a mild headache. My ears were still infected, but the pounding that sounded like a marching band with nothing but bass drums had quieted to a more tolerable whoosh-whooshing, like ocean waves. Either the narcotics had finally kicked in or the yoga had been more than a simple distraction.

I did some research, and it turns out there are legitimate, medical explanations for why performing inverted yoga poses can cure sinus pain (but these should not replace going to a doctor, if needed). Here are a few that I found:

Deep breathing: Controlled breathing is the cornerstone of good yoga practice. It increases the flow of oxygen, which is needed to fuel and heal damaged cells. Recent research has even found a link between increased oxygen flow through exercise and decreased inflammation. It's like Advil that burns calories!

Relaxation: One of the worst symptoms I experienced was extreme pressure in my jaw, made worse by clenching my teeth from the pain. Long-term jaw clenching is a condition called bruxism and has been linked to headaches and ear pain. Practicing yoga helped to relax all parts of my body including my clenched jaw, which in turn helped ease my headache.

Dislodge blockages: When performing inverted yoga poses such as downward dog or standing forward bend, gravity can help to dislodge any blockages and get sinuses flowing again. Kind of like when you turn over a ketchup bottle and bang the bottom to start the condiment flowing.

Sweat: As long as you're drinking lots of water, sweating can be a very effective way of reducing toxins in your body, especially those from excess medications and infections. There are even some studies that suggest that sweat contains chemicals that might actually help fight disease.

Heart rate: Exercise increases your heart rate, which in turn increases blood flow to speed antibodies through your system and flush out bacteria. Studies have found a link between endurance exercise and an increase in white blood cells, which are responsible for seeking out and fighting infection.

Distraction: Yoga and meditation are gaining popularity among the medical community as an effective and holistic for of pain management. Studies have found that meditation can decrease pain activity in the brain by up to 40% in just a few sessions. Instead of focusing on the pain, I visualized my breathing, slow and deep, and felt pressure moving through my head like a bubble working its way to the surface.

Endorphins: Even mild exercise boosts endorphins which can make you feel better than Codeine but without the subsequent nausea and poor decision-making.

Let's face it, there are few places I'd rather be with my three slobbering, booger-eating, glass-licking, young children than the waiting room of a walk-in health clinic. So next time I get sick and feel the pressure building in my head, rather than subject my entire family to the myriad of germs just waiting to be slurped off the waiting room fish tank, I will give yoga a try first. And so should you.