After leaving the Marine Corps in 2004, I was emotionally wounded and physically broken from multiple injuries. Diagnosed with post-traumatic stress disorder and depression, I didn't think I had anything left in me. Practicing and teaching yoga to veterans helped save my life.

After fighting conventional pill-popping treatments, I felt that I had nothing to lose by trying things my own way. When I hit rock bottom, I threw myself into a yoga teacher training program. I had not imagined that my combination of injuries, emotional pain and hardheadedness would be such a challenge. Yoga taught me many new things about myself. It turned out that in order to move beyond my pain, I had to change old habits that had been deeply ingrained by military service.

Multiple knee and shoulder injuries meant I simply could not do things normal people could. I could no longer muscle my way forward, come hell or high water, because my body simply wouldn't allow it. In being denied the physical control I had been so used to as a Marine, other softer sides of me exposed themselves. The vulnerable parts that the Marine Corps did its best to squeeze out of me were the parts I least wanted to explore -- the parts that were preventing me from healing.

I remember sitting bolt upright and storming out of a class while doing a guided relaxation in savasana, the restful pose that normally ends a traditional yoga class. My mind simply could not tolerate lying down and being still. It felt like someone was suffocating me, while anxiety, fear and chaos swirled around in my head. On another day, my back pain was so excruciating that I could not sit up. I had to learn to meditate lying down.

Being forced to let go of the Marine way of doing things was a humbling experience, and one that I fought every step of the way. Before yoga, sitting still or enjoying a quiet moment was my idea of torture. Physical movement was my way of processing stress. As a Marine, if I saw a mountain, I had to run to the top. Objects were meant to be lifted, and open space was meant to be conquered, and fast.

Now, yoga can literally make me feel blissful. I smile more, I allow myself to have fun, and I walk taller. Three years ago, I started teaching yoga to veterans. I started a free yoga class for veterans because I wanted to reconnect on healthier terms with a community I felt like I'd been torn away from. I wanted to give back and help others with the alienating and painful process of recovering from experiences no one at home could understand. 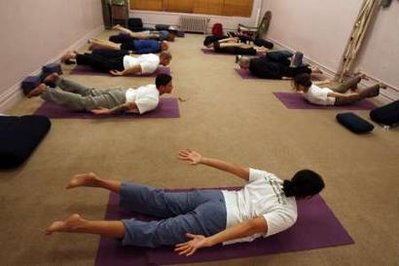 It's a special class. There is no pretense or attempt to impress. You'll find raggedy sweatpants, old t-shirts, and the occasional high and tight haircut. There's a sense of solidarity and level of comfort and familiarity in the room.

Some of my most endearing students are the ones who have faced mind-blowing challenges from military service; some have faced near death in war; some have lost limbs; many have lost friends overseas or spouses back home; some are recovering from substance abuse; some were traumatized under Don't Ask, Don't Tell.

Regular students introduce themselves to newcomers and help them set up their mats and props. Many students end up chatting after class -- about VA appointments, new discoveries they've made about treating a variety of health conditions, the challenges of school, employment, or family tragedies.

Many students are surprised to find that muscling into poses does not, in fact, make the poses any easier to do. Balancing poses are the most surprising for many newcomers. The hard work of adjusting an attitude towards a physical posture, or easing one's body into it, instead of forcing, can lead to small epiphanies.

Learning yoga as a trauma survivor is often times especially grueling. Yoga can cause those emotions and memories we bury and control in order to survive to resurface. One returning Iraq veteran quietly asked me after class why his emotions were rising up while he was doing a restorative pose that allows the chest and hips to relax. Many other students are challenged by poses in which their bodies are particularly vulnerable, especially in a group setting. During a guided deep relaxation, another veteran simply could not relax because the sound of the ceiling fan reminded him of the helicopters that had rescued him after a firefight in Vietnam.

For veterans who simply long for a moment's peace of mind, the less physical aspects of yoga can be a saving grace. In class, we combine physical poses with a combination of breathing techniques and meditation. This way, veterans can begin to get some relief from the practice of quieting their thoughts and deepening their breath, even if they can't yet find their way comfortably around some of the physical poses.

Finding calm in the midst of mental chaos -- experiencing peace of mind without fighting and forcing one's will upon a situation -- was and still is my biggest challenge, and ultimately it has helped me with my teaching.

My favorite part of the week is the feeling I get at the end of teaching a class of veterans, when I watch students leave the classroom looking rested, hopeful and 10 years younger.