As recently noted by The New York Times a sharp spike in honeybee deaths is deepening a worrisome trend. Colony Collapse Disorder, the term used to describe the precipitous decline in the bee population that has occurred in recent years, threatens the foundations of modern agriculture. Here are a few things you can do for the bees. 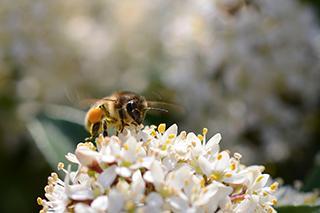 In the autumn of 2006, beekeepers began to report losses of 30-90 percent of their hives, a phenomenon often referred to as Colony Collapse Disorder (CCD). Losses in bee colonies are not unusual--documentation shows periodic unexplained disappearances of bees as far back as the late 19th century--but losses on this scale surprised beekeepers and scientists.

The USDA reports losses averaged 33 percent a year from 2006 through 2011. Since 2011, losses have decreased, though they still top 20 percent. At this rate, though the bees won't likely disappear entirely, the economic repercussions to our food system could be significant as one-third of all agriculture is dependent on pollinators (including three-quarters of our staple crops), and these crops rely on domesticated honey bees to do the job.

Why Are Bees Dying?

What's behind the collapse of bee colonies? Various theories have been considered. While it may not be just one thing causing CCD, research indicates there might be a strong association with the use of neonicotinoid pesticides.

A recent study by scientists at the Harvard School of Public Health showed that low doses of two different neonicotinoid insecticides (imidacloprid and clothianidin) harms bees.

The study's lead author, Chensheng Lu, says these pesticides "are highly likely to be responsible for triggering CCD in honey bee hives that were healthy before the arrival of winter," though the exact biological mechanism responsible for the deaths is not yet fully known.

It's not just bees that are harmed by neonicotinoids. Research published in the journal Nature found these insecticides are associated with declines in farmland songbirds as well.

At the end of 2013, the European Union implemented a two-year suspension of neonicotinoids. Efforts to ban these pesticides in the United States have so far been unsuccessful.

Neonicotinoid pesticides are not just used in agriculture; they're present in a number of home garden products, too. Avoid this list of home garden products, or better yet, go organic in your garden. Purchasing organic plants is as important as using organic methods with plants you yourself grow. A study done by the Pesticide Research Institute and Friends of the Earth found residues of neonicotinoids on just over half the ostensibly bee-friendly plants it tested from 18 different Lowe's, Walmart, and Home Depot stores in the United States and Canada.

This is a small sample size, however Vera Krischik, an ecotoxicologist from the University of Minnesota department of entomology, who was not connected with the study but reviewed the data, characterized the results as "troubling." The pesticide residues found on the plants examined in the study had residue levels such that bee navigation and foraging ability could be impaired. In some cases, residue levels of 748 parts per billion were found. Krischik told Wired that a dose of 192 ppb was enough to kill a honeybee.

If you want to be more sure of the provenance of the plants you purchase, favor nurseries where you can talk to the owners or growers to confirm that bee-harming chemicals have not been used. Plant Native is an online resource to help you find plants suitable for your location and nurseries near you where you can get those plants.

To plant a bee-friendly garden, include a variety of plants that flower at different times, and emphasize native species. Plant large areas rather than isolated patches. In addition to cultivating specific bee-friendly plants, you can also help create bee-friendly habitats, support your local beekeepers, create a bee house, or even become a beekeeper yourself.

Explore more in the category of Sustainable Living.