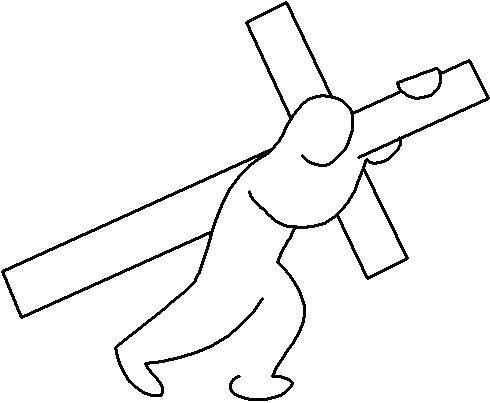 Take up your cross and follow me. It's what Jesus tells his followers to do and a basic summary of what the Christian life is about. Many Christians interpret this to mean making sacrifices. Not doing things that other people can do like smoke or drink or cuss or have sex outside of marriage because you're a Christian. Understanding that you're supposed to be persecuted, which means that if you're not being Jesusy enough to make people actively dislike you, then you're not being a very good Christian. But is that what Jesus really had in mind? I think there's a much more radical meaning to this basic call that few Christians today are actually living out.

Jesus told his followers to take up their crosses and follow him before he was crucified, that is to say, before the cross became any kind of religious. To the crowds who were with Jesus, the cross meant one thing: the most brutal form of the death penalty imposed by the Roman Empire. Every week, they would watch the condemned prisoners take up their crosses and march out of the city gates, condemned to die. And Jesus was telling them to be like those condemned prisoners, to throw their social status and reputation to the wind, to take on an existence without social legitimacy. How different would Christianity look like if Christians understood that their basic vocation is to be illegitimate?

In the evangelical tribe that I come from, the one core doctrine that got drilled into us more than any other was called justification by faith: that we can't do anything to earn our way into heaven except put our trust in Jesus Christ. Properly understood, this doctrine is brilliant: if we are justified by Christ, then we stop trying to justify ourselves and pretending that we're always right. That's what's supposed to be the essence of salvation. But most evangelicals show that they don't really believe in this doctrine, because they come up with all kind of doctrinal and cultural litmus tests to determine who's really a Christian and who isn't.

In the faith that Jesus practiced, there was one basic mark of legitimacy: circumcision. It was more than just cutting an infant boy's penis; it was a metaphor for a life of being set apart from the world, being clean while the uncircumcised outsiders were unclean. In Christianity's earliest days, one of the biggest decisions that was made in the council of Jerusalem of Acts 15 was to renounce the requirement that Gentiles be circumcised, which meant that Christians consisted in the uncircumcised and those who renounced their circumcision by hanging out with the uncircumcised.

And yet evangelical Christianity today is all about a new form of "circumcision." Since we live in an ideological age, our "circumcisions" consist in our issue-positions and doctrinal litmus tests.

To answer the incorrect way to any of these questions is to be an "uncircumcised" outsider.

All of Jesus' best parables are about embracing illegitimacy: the Samaritan heretic who cares for the wounded man because he's not worried about keeping himself clean like the priest and Levite (Luke 10:25-37); the tax collector who beats his breast and receives God's mercy instead of worshiping his own righteousness like the Pharisees (Luke 18:9-14); the father who humiliates himself by picking up his skirts and running to throw his arms around his prodigal son who had so utterly disrespected him (Luke 15:11-32); the banquet where the king invites only the people without status because the VIPs won't come (Luke 14:15-24).

Almost every evil in the world can be explained in terms of peoples' needs to legitimize themselves. How many kids get into fights or even shoot each other every year on the basis of defending their honor? How many marriages end because two people who really did love each other once cannot admit when they're wrong? How many stupid wars have killed millions of people because of the needs of nations to assert their legitimacy? Being illegitimate means that I stop being defensive; I stop needing to win every argument. It means that I'm able to see beyond my own honor. There is no more desperately needed freedom in our world today than the freedom to be wrong. Through his cross, Jesus says to humanity: you're all wrong, every single damned one of you, but put the blame on me so you can be free!

Now just to be clear, I'm not suggesting that we're supposed to try to make our illegitimacy legitimate, to revel in a sort of cynical filth like a floor full of heroin addicts in a mid-nineties Fiona Apple video. The illegitimacy to which Jesus calls us means living in the perpetual astonished perplexity of knowing that we are infinitely loved without merit. It's one thing to say that God loves everybody; it's another thing to live every moment in the truth of God's love for you. The rare few who have actually discovered and embodied the beautiful secret of God's rich unconditional love have no inhibitions that prevent them from loving unconditionally themselves. They stop for wounded travelers; they clothe the naked; they welcome the stranger; and they don't do it for points or photo ops.

This doesn't mean that they're doormats who enable abusers. It just means that winning arguments and being justified in every circumstance are needs they have been liberated from having. If this is a gospel worth sharing, then share it with the Christians you know so they can be set free from their litmus tests and paranoid boundary policing to join the uncircumcised, cross-bearing followers of an illegitimate king. Some Christians just need to be saved from their Christianity in order to follow Jesus for the first time.