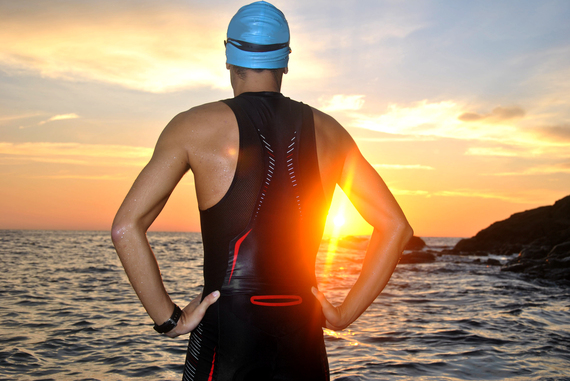 Anyone who watched Chris Legh's epic Kona Ironman performance back in 1997, has to have asked, "Is winning worth dying for?" For those who don't know, Chris collapsed 50 yards from the finish line after 140.5 miles of racing, lost part of his intestines because of it and could have easily died. The video of it is hard to watch. It shows him staggering like a punch-drunk fighter (which he pretty much was at that point), fall, haul himself up one body part at a time, weave, slip, collapse in a broken heap, throw up a few times, seem to hear the crowd pushing him on, then try again -- only to fall even harder, and, ultimately, fail.

There are many who believe his performance perfectly exemplifies the grit and determination it takes to be great. Veteran Ironman announcer Mike Reilly, who was there that day, stands in this camp. Others see someone who should have been put in an ambulance right away.

Chris has won 96 triathlons, so his legacy as a premier racer is rock solid. Given his achievements, it's unfortunate that, for too many, he is defined by that one race. He deserves much better or he needs to be defined by the heart he demonstrated, not the heartbreaking failure. You've got to go to the line to be great. Unfortunately, no one can tell you where the edge is, because we only know by the guys who go over it. As close as he came, Chris did not. And winning so many races, including two Ironman Championships, tells us that he knows his body; knows his limits; knows how to manage it; and knows how to win.

Chris conceded to me that maybe he pushed too far that time, but his dad taught him that "It's only pain," and he needed to push through it. So he tried. The mind game -- staying motivated -- is easy for Chris. Growing up, his dad, a professional footballer in Australia, would go out to ride "for an hour" when he was tired and unmotivated. He'd get the hour down the road and then decide whether to continue. Of course, once he'd been riding, endorphins had kicked in and his desire to succeed trumped his lethargy and he'd put in several more hours. Every time Chris is challenged -- as he was in Kona in 1997 -- he does the equivalent of "just going out for an hour" and then just keeps on going.

Ironman announcer Mike Reilly, who's probably seen more Ironmen finishes than anyone, says that you aren't a failure when you make a mistake. "You're only a failure if you do it again or don't improve on that mistake." He believes that Chris is heroic and that his race came down to matter over mind: "his mind was trying to push through all the pain and dehydration but just couldn't."

Mike knows a lot about legacies. Over the more than 25 years of emceeing Ironman races, he has been privileged to call his signature "You're an Ironman!" to many parent and child pairs -- most frequently, years, even decades, apart. People will stop him before the race to say, "You called my dad an Ironman years ago. I was there, and now you're going to call me one."

Mike believes the notion of "legacy" is broader than most of us think. "I've learned that parents, family, kids all know what they [the Ironmen] just did. Those Ironmen are going to go out and be the influencers of everyone in their lives and that's a legacy." He thinks that Chris probably doesn't realize the impact he has on the race world and those around him. "To me, he won the race."

Chris Legh's only regret is that he didn't break 100 triathlon wins. As Mike Reilly says, "There is always another finish line somewhere." If Chris had reached 100 wins though, I bet he'd regret not making 110. It's just how he's built. And that's his legacy and, to him, worth dying for.