By Samantha Lefave for Life by Daily Burn 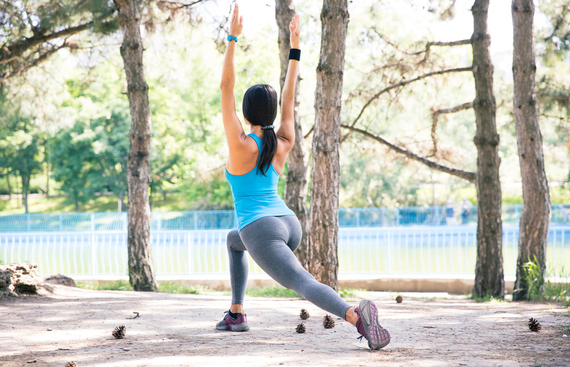 You remember the moment it hit you: When you realize that, even though you've been eating about the same and exercising a fair amount, you've put on a few pounds. Or, you came back from vacation only to realize you weren't bouncing back as quickly as you used to from the fried foods and frozen margaritas (#noregrets). Maybe you're not entirely sure what's going on, but you think you have an idea: Your metabolism is slowing down.

And you are probably correct.

Caroline Cederquist, M.D., author of The MD Factor Diet, says that while it's different for everybody, your metabolism slows down as you age. For most, it starts in your 20s or 30s. For others, it may not happen until your 40s or 50s. Regardless, it's important to know how your metabolic system works, so you can keep its engines running at full throttle.

Here's How to Increase Metabolism at Every Decade

In Your 20s
On average, this is when most people experience their highest resting metabolic rate (RMR) -- aka when your body burns the most calories just by sitting still. "Some of it is based on genetics, but a large part of it has to do with how active you are," says Cederquist. We tend to have fewer commitments, which frees up time for active movement. Not to mention your body continuously builds bone until you're about 25, a process which gives your calorie burn a boost. In your late twenties you might start to notice that you can't eat quite as frivolously as you used to, but for the most part, your body can bounce back quickly with a cleaner diet and regular exercise.

In Your 30s
If you haven't started strength training yet, Caroline Apovian, M.D., author of The Age-Defying Diet: Outsmart Your Metabolism to Lose Weight, says now's the time. "Your resting metabolic rate is directly related to your muscle mass," she says. "The more you have, the more energy you'll burn even when you're not working out."

Daily Burn: The One Habit That Could Slash 1,400 Calories Per Week

The problem is that when you hit your 30s your muscle mass starts to naturally decline, says Apovian. "You lose about one percent each year," she explains. But it doesn't have to be that way. "When you don't use your muscles, you're essentially telling your body that you don't need it, so it starts to store more fat," she says. To prevent that, add strength training to your schedule two to three times a week.

Women may want to lean toward the higher end of that spectrum, as it takes more effort for them to maintain muscle mass, says Cederquist. Men typically have more testosterone, which contributes to a lower body fat percentage and more muscle tissue, both of which rev your metabolic engine.

As if that wasn't enough, your 30s are also the decade in which you produce less human growth hormone (HGH), leading to a dip in metabolism, says Cederquist. Once again, though, strength training can help you produce more of it -- so hit the weights already!

In Your 40s
For a lot of people, this can be a period of yo-yo dieting. In fact, a recent survey found that the average woman has tried dieting for more than six years by the time she hits 40, yet 95 percent of dieters regain any lost weight within five years. But Apovian says it's important to try to keep your metabolism off the rollercoaster ride. "If you've always weighed 200 pounds, you're going to need about 2,000 calories per day to maintain that weight," she explains. "But if you weigh 220 and lose 20 pounds, even though you might have the same BMI as the person who's always weighed 200, your metabolism is going to be slower and you'll need to consume fewer calories."

That's where protein comes in. Cederquist says the average American isn't getting enough of it, but it helps keep you full and it feeds your muscle tissue, repairing the tiny tears you cause with each workout so that your muscles can grow stronger. The amount each person needs varies, but you can use this online calculator to figure out your personal needs. Cederquist suggests eating some at each meal, rather than overloading at dinner, to keep your metabolic fire stoked all day.

In Your 50s
The average woman enters menopause at age 51, according to the Mayo Clinic. When that happens, her production of estrogen and progesterone declines drastically, leading to bone and muscle loss and often weight gain because of the hormonal change. (Men, on the other hand, tend to gain weight at a slower pace due to a more gradual hormonal shift.) Once again, strength training is key. "Now that your bones are at an increased risk for injury, it's even more important to lift weights," says Apovian.

Watching your sugar intake is also key, says Cederquist. "As you age, your body isn't able to move glucose — our primary source of fuel — into our cells for energy as efficiently," she says. "When that happens, the body has to do something with the glucose that doesn't enter the cells, so it ends up storing it as fat."

The bottom line: Monitor your sugar and carb intake, squeeze in plenty of exercise, and follow it up with a hefty dose of protein. That's the hat-trick you need to having a fit, speedy metabolism — no matter what your age.

More from Life by Daily Burn

Kettlebells vs. Dumbbells: Which Should I Choose?

Are Your Friends' Weddings Sabotaging Your Weight Loss?

7 Things I Wish I Knew Before Starting Daily Burn