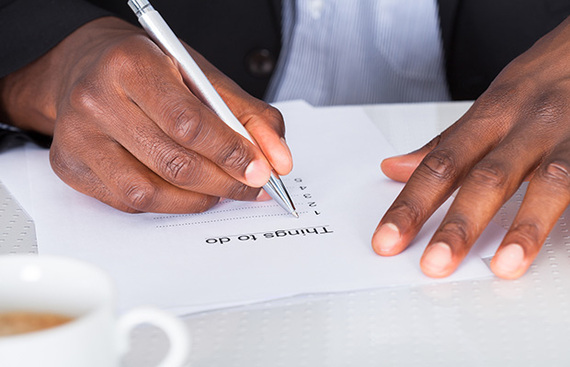 By Christine Yu for Life by DailyBurn

You've got a to-do list, a bucket list a grocery list and a wish list -- but aside from the sweet satisfaction you get from crossing off each item, does your list-making habit actually make you happier?

For Seattle-based small business owner, online curator and blogger Moorea Seal, the answer is yes. "Creating organization and detail within my creative landscape is essential for me to accomplish anything," says Seal. "List-making is that guideline that turns my creative wandering into [practical] steps and outlines."

List lovers know that neatly organized to-dos make it easier for them to order and process information. But perhaps more importantly, Seal discovered another use for her numbered lists: self-reflection. "I know so many people who get pretty enthusiastic about list-making," says Seal. "I wanted to transform that everyday habit into a simple but straightforward weekly ritual of self-discovery."

In 2013, Seal started the 52 Lists Project on her blog. Each week, she shared a prompt, such as: 'List the things that make you feel healthy: mind, body and soul,' or 'List your greatest comforts.' "I suddenly began to see on paper just how much goodness I am surrounded by," says Seal. "List-making offered a healthy way for me to look at all the elements that make me who I am and gave me the chance to be proud of it all and thankful for every high and low, which is the greatest healing." Soon, a virtual list-loving community blossomed on her blog, as others began to share their own lists and connect with each other.

There's good reason why people flocked to the project. Lists are simple, logical and approachable. It's like a lazy person's form of journaling. And research has shown many physical and emotional health benefits associated with journaling, including reduced stress, improved immune function and increased emotional well-being. Plus, according to a study in the journal Psychological Science, writing things down by hand improves your memory and leads to higher quality learning.

This year, Seal transformed her online venture into a book called The 52 Lists Project: A Year of Weekly Journaling Inspiration. "I created each list prompt very thoughtfully, allowing [you the] freedom to take the prompt however you want, dependent on your personality, but [also] in a simple and specific way that wouldn't overwhelm anyone," says Seal. A 'Take Action' section, designed to encourage further reflection on how you can transform your life, accompanies each prompt.

Want to start cranking out lists that are more meaningful than your typical memos to 'Buy chicken'? Use one of the 20 prompts on Seal's blog or pick up the book. Seal offers these pointers to help you get the most out of your very own weekly list project.

1. Don't Edit
We often have preconceived notions of how we think we should respond to things -- but resist the urge to censor yourself before you write your list. "The greatest mistake would simply be not allowing yourself to release," says Seal. "The more you allow your mind to explore, acknowledging every high and low, confusion or solid decision, the more comfortable you will be in simply being a complex, mysterious and unique human being."

2. Never Erase
One of Seal's key list-making tips comes from her art school days -- never erase. "Whatever flows from your pen is something that was meant to be on the page," she says. "Once it's there, you have the opportunity to see each comment and thought through a bigger lens, analyzing each line in comparison to the next and the whole collective of thoughts together," she says.

3. Make It A Habit
List making is a practice, just like exercise, yoga or meditation. You have to make the time for it. Seal sets aside an hour each week to write her weekly list. "When I do it, I feel so much more at peace and fulfilled," she says. "There's nothing as satisfying as completing a list."

Whether you're a long-time list maker or are just warming up to the idea, it can be a powerful way to stay organized, but also to reflect on your goals. "I recognize that delving deeper and getting to know oneself is a more terrifying task for some people than others," says Seal. "List making is that perfect balance of getting to the root source of what you think and feel without getting too complicated or lost in thought."

More from Life by DailyBurn:
How to Get Good at Stress (And Make It Work in Your Favor)
12 Brilliant Meal Prep Ideas to Free Up Your Time
The Stress Hormone That's Messing With Your Diet