NOW on PBS interviewed Howard Dean as part of its show, "Gambling with Health Care," examining the health care crisis created by the economic meltdown. The full text of that interview is pasted below.

In it, Dr. Dean talks about his support of Medicaid, the need to cover young people, and why we can't afford to put off health care reform.

DAVID BRANCACCIO (DB): Are you a fan of Medicaid?

HOWARD DEAN (HD): It is a fantastic program. People are healthier because of it.

DB: When you were governor of Vermont, you built upon Medicaid in your home state to get a lot of people covered.

HD: We have more children covered, I think, than any other state in the country. Ninety-seven percent have it. We made families of four who make less than $65,000 eligible for their kids to have health insurance. Now, it didn't cost us hardly anything. We didn't raise taxes, although the federal government paid for a significant portion of it.

The truth is there's no excuse for not covering people under 18 in this country. It's insane not to because if you don't, you pay for all that stuff later on when they turn 30 or 40 or 50 or 60. You can use Medicaid as one of the building blocks of universal health insurance. And we certainly ought to do it for people probably under 25. 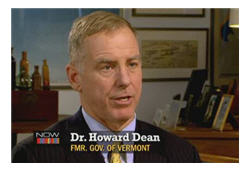 DB: Would you increase money for Medicaid during this difficult period temporarily or would you make it permanent?

HD: I would make it permanent. We need a universal health care system in this country. We don't have one. We're the only industrialized democracy in the world that doesn't have one, and we pay a fortune because we don't have one.

DB: What do you think should be done in America to fix health care?

HD: If I could design any health care system I wanted, which I won't be able to do, and neither can the Obama Administration or anybody else, I would probably use Medicaid for young people, and expand it to about 27 years of age. I would just let those kids have insurance for practically nothing. It's cheap as dirt and really is not a serious expense.

After that, if folks aren't in the insured pool, then they should do what's in the Obama plan, which is to be able to pay into and buy into Medicare, whatever age they are. You know, you shouldn't have to wait till you're 65. If you can't get health insurance any other way, why not allow those folks to buy into Medicare? We're not going to get rid of private insurance. People will still be able to choose private insurance. But let them choose a public insurance as well.

We're losing jobs to Canada because Canadian companies don't bear the tremendous inflationary costs of their health care system, and our companies do. Look at the automobile companies right now. They're suffering enormously and what's the biggest problem? Retiree health care. We are killing our own companies by not having a health care system that works for everybody, and we have to stop that.

DB: Critics of government health plans like SCHIP, Medicare and Medicaid say that eventually the costs of this are just going to cripple this country.

HD: The problem with that argument is that we spend more than every other country on the face of the earth on health care as a percent of our GNP already. So the problem is we have no system. We have total chaos in this country in terms of funding and there are tons of people who are not covered, including a lot of kids. That's insane. We end up paying almost twice as much as the next country because of our incredible inefficiency. America is a very efficient country, except in health care where we are the most inefficient country. And we cover the fewest--percentage wise--of our population compared to any other country in the industrialized world.

DB: There's a public perception that Medicaid is wasteful, that it's a government program with corruption in it and a lot of bureaucratic overhead. That's not your understanding?

HD: When I was governor, I had a big fight on the left as well as on the right when we put through universal health care. So we contracted out our Medicaid program to be administered by a private insurance company. After three years, we had to take it back because the expenses associated with our running Medicaid was about four percent. And the expenses by the private insurance company were 12 percent. 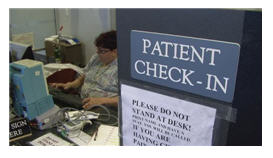 DB: I recently spoke with a progressive economist who argued that the pressing challenge of the economic downturn means we should put off health care reform. Do it later. Do you agree with that?

HD: I would say that would be an ... incredibly foolish piece of advice. For one-sixth of what we just spent bailing out Bank of America and Citicorp, we could have a health insurance program that finally worked and enabled America to compete again with other industrialized democracies. I think this is exactly the time we should be working on health care. If we miss this opportunity, it'll be the greatest scandal in the last 60 years when since we first starting out trying to get health insurance under President Harry Truman.

DB: State governors are being forced to make some very tough funding decisions right now. Revenue is down, and some states are cutting health care. What would you say to them in this kind of environment?

HD: I went through two recessions as governor and I had to cut Medicaid. There's a way to cut Medicaid that's painful but right, and there's a way to cut Medicaid that's the wrong way. What you don't do is take people off the roles. That's a terrible mistake. What you can do is reduce benefits. It is better to have some health care that's not as good as it once was than not to have any at all. So my advice to governors if you're having a tough time is : Go find out what's expensive and cut some of that stuff out if you have to. But don't throw people off their health insurance. That's the wrong thing to do.

DB: Do you think we'll be able to be successful at health care reform this time around?

HD: I hope so. We have a huge Democratic majority in both the House and the Senate. We've got a Democratic president who's promised and campaigned on universal health care. There's no excuse for it. If the Democrats don't do it, we probably won't get hired again.