That detail? Per Kurtz: "He was engaged. To be married. To a woman."

Ahh, yes, love the mounting drama of those three sentence fragments, bludgeoning the reader with IMPACT in a way that could not be conveyed by simply writing, "He was engaged to be married to a woman."

But let's go to the Eat The Press telestrator to review Collins's play in detail: 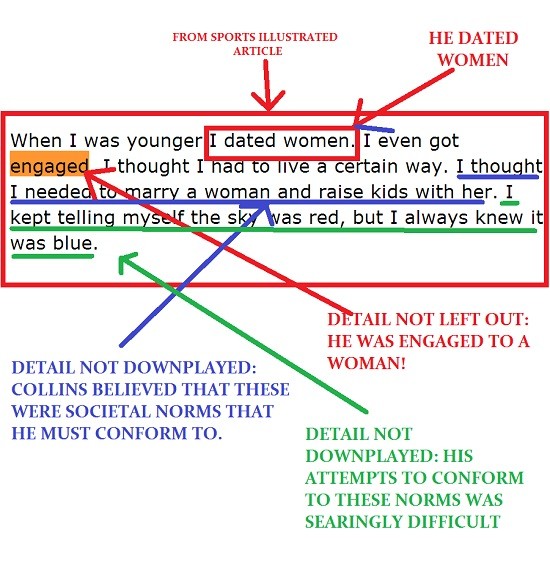 As you can see from this part of Collins's article in Sports Illustrated, he did not leave this detail out. He "dated women." He "even got engaged." I don't know if Collins could have NOT left out this detail any harder than he did. He drove into the paint and banged it home.

And here is Collins, both disclosing and not downplaying his engagement to Carolyn Moos, in an interview with ABC News' George Stephanopoulos:

STEPHANOPOULOS: Did you think you might grow up, continue to play, grow old, get married, have a family and never come out?

COLLINS: I knew that I tried everything in the book as far as trying to convince myself. You know, to lead, the life that you should --

STEPHANOPOULOS: You were engaged to a woman at one point?

COLLINS: Yes. And calling off the wedding was obviously a tough decision but it was the right one, because I knew I wasn't getting married for the right reasons. I still love her to this day. She's a great person and -- but as far as doing what was right for both of us, it was the right decision.

Now, Kurtz. He has heard it. From Twitter. And so he has altered his story a teensy-weensy bit. Now it reads that Collins "downplayed" the detail, instead of leaving it out. But again, as the Eat The Press telestrator shows, Collins didn't downplay the detail. The societal expectations Collins was attempting to conform to posed a struggle. As he says, he felt that he "needed to marry a woman and raise kids with her." He goes on to note that this put him in a constant state of self-denial.

I am at a loss as to how Collins would have "up-played" his engagement. Perhaps he should have disclosed the seating chart of the wedding he never had?

Kurtz continues, for some reason:

And when did she find out about his homosexuality?

A few days ago.

I mean ... THAT'S WHEN WE ALL FOUND OUT. This is the larger point, here. Yes, part of the story is, "Howard Kurtz can't be bothered to read more than seven paragraphs of an important news story, makes demonstrably false/easily disproved assertion." But the real question is: why does this piece of writing on the Internet even exist? Kurtz's sub-headline asserts that Collins "didn't come clean," but as near as I can tell, Kurtz is holding Collins to mysteriously bespoke standards of "come-cleanness" that just don't seem to matter to the wider universe outside the rat-trap that contains Kurtz's really deep thoughts.

But Collins was hailed by the media and other public figures for having the courage to tell his story. He mentioned the engagement to Sports Illustrated, but didn't dwell on it.

Collins didn't dwell on his recipe for chocolate chip pancakes either! Is there a point to this? Is there a cause that Kurtz is defending? I am really, really not sure. There is so much tsk-tsking here, and I just keep waiting for the big reveal. I guess this is it?

I'm sure it wasn't easy becoming the first male athlete in a major sports league to come out as gay. But I have to assess a foul for the incomplete nature of the disclosure. Did Collins think his longtime squeeze was just going to stay silent?

I honestly don't understand that whole part. Any reasonable person would have to assume that she wouldn't. I just can't imagine that Collins failed to factor in the possibility that the woman he was engaged to would have nothing to say about this. In my mind's eye, I keep seeing Kurtz level that as his "j'accuse!" line, and in the next beat, Collins looks at him in utter dumbfoundment and says, "Dude, chill."

I'd also point out that Kurtz is the Washington Bureau Chief of the Daily Beast, and Washington is pretty much built on the fever dreams of Pierre L'Enfant, bipartisan flopsweat and disclosures of incomplete natures. Is Kurtz going to be "assessing fouls" now every time an "incomplete disclosure" of such picayune quality comes his way? If not, why did he pick this one in particular?

Perhaps in his next interview, as he tries to get another basketball team to pick him up, Collins can tell us the rest of the story.

Go get that story your damn self, if you think it's so bloody important. In the meanwhile, Howard, I beg a disclosure from you: What animated you to write this? Because frankly, you leave it open to speculation:

It must be humiliating for the Daily Beast to realize it's getting Howard Kurtz's b-material. huffingtonpost.com/2013/05/01/how…

UPDATE: The Daily Beast has retracted the piece. Curiously, they send their regrets on Kurtz's behalf. One is left to conclude that Kurtz does not personally feel any regret for this, which is puzzling.

ADDITIONAL UPDATE: And Dylan Byers reports that Kurtz is dunzo at the Daily Beast. Per Tina Brown: "The Daily Beast and Howard Kurtz have parted company."