After suffering the indignities of neglect for more than 20 years, the Howard Theatre is back. Legendary as the country's first black theatre and stage for music greats for decades, Howard has been restored and polished inside and out. And people are ready.

When I arrived at the Howard Theatre's rebirth celebration in D.C.'s Shaw neighborhood under a shining midday sun, I immediately joined the crowd moving to the righteous rhythms of the James Brown Experience Band playing outside, while people lined up to tour the theatre's interior. It was "Community Day," a free celebration for the public, and I was one of a handful of white people there, which was appropriate given the Howard Theatre was built for black people more than a hundred years ago when segregation kept them from attending the white-only theatres throughout the city.

But white folks were the losers, at least for awhile. Because when the Howard Theatre opened, it became the scene for music. Ella Fitzgerald got her start there; Cab Calloway, Duke Ellington and Count Basie played there. Motown's finest, like the Supremes, Martha and the Vandellas, Smokey Robinson, and Aretha performed at the Howard; Ray Charles crooned soulful rhythm and blues there and James Brown made people feel good. B.B. King played Lucille on Howard's stage.

Created before the Apollo Theatre in New York, Howard held amateur nights, which not only introduced local talents like wonderful Marvin Gaye to the public, but also opened up the theatre to people who might not be able to afford the big name acts. And during the '50s and '60s, in the spirit of having a "Theatre of the People," races could mix -- which meant white people who loved music got lucky.

But then the Howard Theatre got unlucky. D.C.'s '68 riots tore up the neighborhood and crime became endemic. Yet, in 1974, Howard was declared a National Landmark, reopened in 1975 and by the '80s, became host to Washington's "Go Go" scene, making Chuck Brown a local music hero. But, the theatre was not sustainable and ended up becoming the possession of the D.C. government.

Now, "times, they are a changing." Why? Because Roy "Chip" Ellis and Malik Ellis, principals of the Ellis Development Group, saw through the theatre's decaying walls, perceiving it as the crown jewel of their firm's Progression Place Project, a mixed use development project in Shaw. To realize their dream, they had to get financing and permission from the D.C. government. To gain access to the theatre, which was colonized by dust and dirt, they had to wade through weeds and debris and slide through chain-link fences.

In 2006, Ellis was awarded the contract to redevelop the building. They formed a non-profit called Howard Theatre Restoration, Inc. and began the arduous financing process, which included D.C. government grants, private donations, culminating in working with the Blue Note Entertainment Group, which owns the B.B. King Blues Club and Grill. By September 2010, the groundbreaking ceremony was held.

By April 9, when I entered the theatre and saw Howard's 12,000 square foot interior on that bright Community Day, the vast space was all dressed up and shiny and ready. Lines of polished tables beneath the stage awaited patrons and rows of new seats, unblemished by wear and tear, lined an upper tier. In the back, a great, gleaming bar was ready for customers, with infinite rows of bottles bathed in a golden light, framed by gigantic photos of James Brown and B.B. King overlooking the theatre. 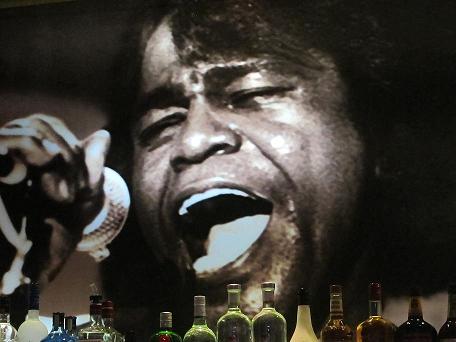 Following an extravagant gala, with a cast of entertainers that filled me with unfulfillable gala-lust, it's really show time for the Howard, if you can afford it, although Chip Ellis stressed the restoration organization's intention to make sure Howard was still a theatre for the people. So if you can't manage $95 tickets to catch the incomparable Chuck Berry, or $50 for the great bluesman, Taj Mahal, there will be other opportunities to enjoy the theatre, including lower priced acts (the energized Robert Randolph at $25) and perhaps, most importantly, the revival of amateur nights, when local talent and some future stars will perform, as well as Sunday Gospel brunches.

For the Howard Theatre, it's showtime again.

dcDC Around Town
Go To Homepage