Even though Merck's Gardasil and GSK's Cervarix are highly advertised to doctors and patients, many women are just saying no to the vaccines, according to research presented at the American Association for Cancer Research in Philadelphia last month.

The vaccines protect against the Human papillomavirus (HPV), the virus which causes cervical cancer.

Fewer than one-third of 9,658 teenagers and young women who were eligible for the vaccine actually began the three-injection series between 2006 and 2010, according to data analyzed at the University of Maryland. Others started the regimen but didn't get their second or third injection.

Of course there are many reasons women may veto the vaccine for themselves or their children. Even though the vaccine is nearly 100 percent effective in preventing precancerous cervical lesions and protects against the two HPV strains that cause 70 percent of cervical cancers and 90 percent of genital warts, it isn't effective against all HPV strains. It is also not more effective against cervical cancer than a Pap smear and even when it does work, may require a booster. Nor do researchers know how long protection lasts.

The HPV vaccine is also the most expensive of all recommended vaccines at $359.25 for all three doses says Pew Research.

And then there's the morality issue. 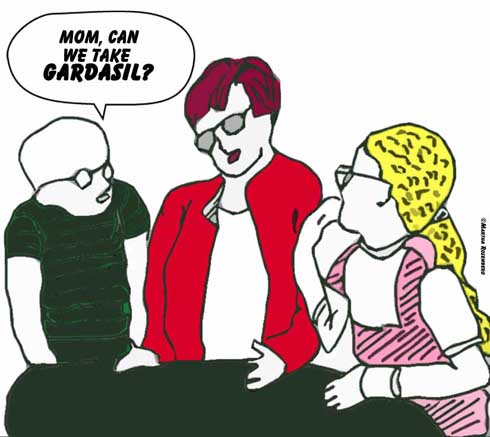 "I was greatly offended that Merck suggest I vaccinate my nine-year-old daughter against an STD," says Kelley Watson, a mother of two in the Chicago suburb of Oak Park. "Especially insulting to me was that there was never any mention of HPV as being a sexually transmitted disease. It was presented as something women can contract through tampons or nylon stockings -- as if men played no part."

In addition to causing fainting, allergic reactions, Guillain-Barré Syndrome and blood clots, 56 girls have died from the vaccine as of September says the CDC. 14-year-old Natalie Morton died last year, soon after being vaccinated for HPV at her school in Coventry, UK though authorities now say she died of a tumor. And the vaccine was suspected in the deaths of six children in trials in India last April.

Critics ask why the primary endpoint in trials was not cervical cancer, but lesions that could become malignant and why placebo data was spun to make the vaccine look more effective.

And medical professionals increasingly question the safety of organomercurial thimerosal and aluminum salt adjuvants in vaccines and the possibility of zoonotic DNA transfer. Earlier this year FDA found pig virus in rotavirus vaccines made by both Merck and GSK, given to infants to protect against severe diarrhea and dehydration. Oops.

There are also transparency questions. Why did former First Lady Laura Bush work with Merck-funded citizen front groups to promote the original vaccine and why are governors like Texas' Rick Perry trying to mandate vaccination of all girls?

University of Queensland lecturer Dr. Andrew Gunn was silenced by his university when he dared to question the vaccine and ordered to apologize to the vaccine maker, CSL, according to the Courier Mail</em>. Dr. Gunn expressed doubts about the vaccine's "marketing as a solution to cancer of the cervix when at best it's expected to prevent about two-thirds of cases" and "the incorrect and dangerous perception that it might make Pap smears unnecessary; and the difficult question of the best age to give a vaccine whose effect might yet prove to wear off before many recipients even start having sex."

And one of Gardasil and Cervarix' original developers, Dr. Diane Harper, a consultant to the World Health Organization, also questioned the vaccine's lack of safety and effectiveness at last year's 4th International Public Conference on Vaccination in Reston, Virginia only to appear to retract her remarks later.

It's no secret that Big Pharma is pushing vaccines as many of its expensive blockbuster pills go off patent or are no longer waved through by insurers. Drug companies are even marketing the HPV vaccine in poor countries whose real problems are malaria, potable water or Dengue fever.

Continuing Medical Education (CME) programs, which doctors are required to take to keep their licenses but are widely criticized as being Big Pharma commercials, have also been promoting the vaccine.

One, which ran on the CME giant Medscape, was titled "Quadrivalent HPV Vaccine May Be Effective in Women 24 to 45-Years-Old" and granted credits for "studying" a Lancet article written by authors that included two Merck employees.

"What was the main conclusion of the current study," the CME asks takers of the course as if they're at a time-share presentation instead of clinicians. Upon completion on this activity, you'll be able to "specify the currently recommended age range for the administration of the quadrivalent human papillomavirus vaccine," the doctors are told.

The vaccine is also promoted directly to consumers. Poster-sized ads for Gardasil ran this spring on Chicago's CTA trains pretending to sell real estate in sought after neighborhoods. A closer look revealed descriptions of women in those neighborhoods who thought they didn't need the HPV vaccine but did. And, in March GSK rolled out Cervarix at the 2010 Oscars as if it were a fancy perfume.

In October, GSK even launched TV ads depicting twenty something women flashing "cool" Cervarix tattoos in front of the camera that read "armed against cervical cancer."

Some would say we need to be armed against such advertising.