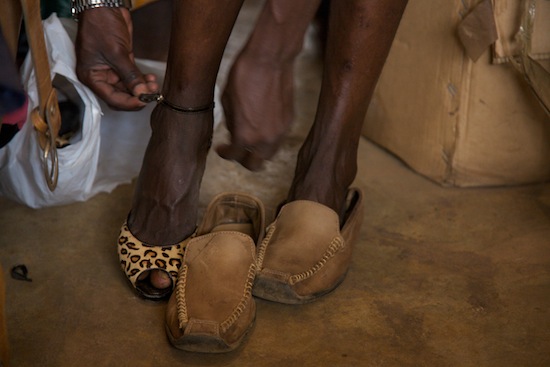 A Kampalan drag queen tries on a favorite pair of shoes, in the film Call Me Kuchu

"I don't want no peace, I need equal rights and justice." Peter Tosh

I grew up grooving to the sounds of Peter Tosh and his strong lyrics chock full of human rights references. These days, his words sound hauntingly true throughout the Arab world and beyond, wherever people are demanding their dignity and freedom, by any means necessary.

Yet if we think that only in those faraway lands with names we can hardly pronounce people are missing basic human rights -- such as a fully functioning system of healthcare, safety in the workplace, the ability to love who they want, a clean environment and freedom of expression -- we are delusionally wrong.

The upcoming Human Rights Watch Film Festival at the Film Society of Lincoln Center presents a refreshingly unbiased and balanced view of the world, where human rights violations occur in hot zones like Cambodia, China, the Occupied Palestinian Territories and Uganda but also right here in the USA. The definition of what constitutes a third world vs. a first world country becomes increasingly blurry once we step into the issues of healthcare, immigration and the environment, even in a country deemed a global superpower.

From Escape Fire: The Fight to Rescue American Healthcare, a documentary which deals with what we can all agree is our broken-down "disease-care" system, to Bidder 70 chronicling the real-life adventures of environmentalist Tim DeChristopher, to The Invisible War and the everyday struggles of women in the military, who not only have to fight for our country but also defend themselves from sexual violence at the hands of their fellow soldiers and officers, the films in this year's HRWFF paint a picture of a country in need of mending: ours.

Of course, we can still count ourselves lucky in the West after watching films like Bitter Seeds, depicting the Catch-22 faced by Indian farmers, which leaves them to consider suicide as their only way out, or Little Heaven, about an orphanage in Addis Ababa, Ethiopia for children living with HIV, and Silenced Voices, chronicling the risk Sri Lankan journalists face to tell their country's stories, which in one infamous case resulted in death.

I had a chance to preview a few of the titles in this year's festival, picking from the line-up in my typically eclectic style. While there are no favorites when it comes to stories that are this important, I found myself thinking of some films more than others. Here's a short recap.

Ai Wei Wei: Never Sorry, in its NYC premiere at the festival, is about the Chinese artist and activist who has become an ever fighting reminder of China's inability to live up to its booming economy, in truly human terms. Wei Wei's courage is only equaled by his personal magnetism and relentless questioning of inadequacies within his country, while his untiring presence on Twitter and through his popular blog make him a hero of our times.

The Invisible War is a haunting depiction of the role of women in the U.S. military. Through the harrowing stories of Kori, Jessica, Robin, Trina and Ariana, among many, many others, the film weaves a tale of sexual abuse, violence, disrespect and disregard directed mostly at women, but also some men, within our armed forces. It reinforced my personal gospel, that it's never completely safe to be a woman, no matter where I am or what I do. As one 1960s recruiting ad stated, "There is a right way, a wrong way and the Army way" -- indeed.

Habibi presents a narrative story of love, or rather the inability to love in times of war. Inspired by the epic Arabian tale of Layla and Majnun, also known as "Layla and the Madman," Habibi is as much a film about the dynamics of the Gaza Strip as it is about its protagonists Layla and Qays, two young lovers with love on their side and everything else against them. It's superbly acted by Kais Nashef and Maisa Abd Elhadi and the end will leave you breathless and wondering.

Call Me Kuchu is also about love, but this time in the form of a documentary film about Uganda, highlighting the illegality of homosexual love in the East African nation. Raising important questions such as when does journalism cross the line from reporting to vigilantism, what makes love right or wrong, just who should be the judge of that and where does religion come in to give its finishing blow, this is another film that left me thinking for days.

Words of Witness is the beautiful, inspiring story of Heba Afify, a young, enthusiastic journalist who followed the revolution in Egypt and gave the headlines her own personable, insightful voice. It was a pleasure to get to know Afify through the film, I've become a huge fan of her writing, which can be found on various blogs and in the NY Times, and started following her on Twitter. While the film leaves the viewer wondering what will be left of Egypt after those infamous 18 days in Tahrir Square, it also persuades us that the best outcome for the country lies with people like Afify and her peers.

And last but not least, Salaam Dunk is a story about basketball but also friendship, the resilience of youth and a glimmer of hope for Iraq, or at least Kurdistan. In the north east city of Sulaimani, at the American University of Iraq, around a dozen young women are playing a game we often take for granted here in NYC, yet in Iraq is "haram" (forbidden) for women, as most sports are. What makes this story so compelling is a bit of the flavor of Jafar Panahi's Offside -- which felt like an obvious inspiration particularly during the bus trips to their off-campus games -- coupled with the filmmaker's obvious passion for the game and what it represents to the AUIS women's basketball team. All topped by an infectious soundtrack guaranteed to get feet tapping.

The Human Rights Watch Film Festival runs from June 14th through the 28th at the Film Society of Lincoln Center in NYC.