The HTC One X is a great phone with a terrible name.

In fact, it might be, depending on your tastes, the best phone with the worst name. Or, if you are not as offended by the lifeless, metallic clank of the lab-prototype-sounding moniker "One X," we might just call it this: one of the best phones you can buy, period, regardless of name.

On AT&T, the One X is the best Android smartphone out there, topping the Galaxy SII (due for an update in May; now is NOT a good time to buy a Galaxy SII). It is also a strong competitor of the iPhone 4S for the crown of best smartphone PERIOD, on any carrier, bolstered by a beautiful large screen, a top-of-the-line camera and the powerful HTC-infused Android operating system. Some might be turned off by the Shaq-optimized screen size -- 4.7 inches -- but if you have "big screen envy," as a co-worker of mine recently put it, you should try out the One X first (and then the Galaxy Nexus, and then the Droid Razr Maxx).

The name "One X" might be forgettable and uninspiring, but the phone itself is not. Where's the revival of the "Incredible" line when you need it?

You see, "One X" makes me think of many, many things: Wacky robots from the '70s, experimental pharmaceuticals, high school algebra. None of these things call to mind a top-of-the-line smartphone that is fresh and exciting.

I keep turning the "One X" name around in my head, searching for meaning. Here's what it makes me think of, for better or for worse:

X1: In 1948, the Bell X1 became the first aircraft to go the speed of sound, and though the HTC One X isn't supersonic, it is fast. Its data speeds on AT&T's 4G LTE network regularly dwarfed those of the iPhone 4S (on AT&T's quote-unquote "4G" HSPA+ network) in New York City. The full results of my speed tests are below, but the LTE service was appreciably faster on downloads and uploads.

Touchscreen responsiveness is solid, though still lags slightly behind the Lumia 900 and the iPhone 4S. For an Android smartphone, however, it's among the best. The 1.5 GHz dual-core processor seemed up to the task, loading the camera, webpages, and all of my applications quickly. Smartphone buyers should be aware, however, that Android phones with quad-core processors, which promise to be even faster, should be out within a few months, starting with the Galaxy S III.

All told, the One X is a pretty fast phone. Not Chuck-Yeager-in-a-flight-suit fast, but fast.

Windex: Windex is a popular glass cleaner that comes in blue liquid form and smells like -- well, like clean windows. You'd need a lot of Windex to clean the glass screen of the HTC One X, which is an immense 4.7 inches and super sharp. Viewing photos, websites and videos is more attractive on this larger display, though some will no doubt be turned off by the size of the phone compared to smaller models like the iPhone 4S. 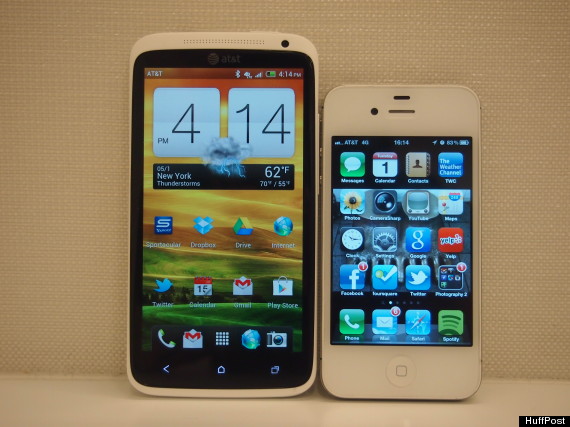 That's a personal preference, I suppose; I got used to the size quickly. It helps that the One X is, despite its huge screen, so thin and light. It's a couple of grams less than the iPhone 4S and is 0.4 mm thinner. If you're going to complain about anything in the design, it might be about the camera hump on the back of the phone, protruding from the otherwise flattened body like a big seeing-eye pimple.

I kind of like the look -- it's a real stylistic differentiator, at the very least -- though some might poo-poo it, I know. But when it gets you photos that look this good...

Three, Two, One...X!: I keep going back and forth between which phone has the best camera: the iPhone 4S or the HTC One X. Colors really burst on the One X in a way they do not on the iPhone; next to each other, it's like the One X camera is living in a Gushers commercial and the iPhone camera is living in gray-cloud-land. Definition on the two cameras seems to be roughly even, though I did have a problem getting the One X's camera in focus while using flash in a dark room.

In terms of features, the One X's camera clearly outpaces that of the iPhone 4S, as it's pre-loaded with filters, a better editing suite, burst photography, slow-mo and panorama modes and shooting scene configuration. As for which one actually takes better photos, I'd take the One X in the daytime and the 4S at night.

Skrillex: Skrillex is a popular DJ whose songs all feature a signature sound: "ZHOOP ZHOOP ZHOOP ZHOOPZHOOPZHOOP ZHOOOOOOOP." The One X comes pre-loaded with Beats Audio integrated across all audio players. As I've written before, it's a nice enhancement, but it's not the game-changer that HTC thinks it is. Moving on, lest I get a Skrillex song stuck in my head.

One 'X': In English, an 'X' can denote a mark against something or an incorrect response. In the past, the big mark against HTC phones was the awful battery life, due to the bright screens and the battery-sucking 4G LTE. Good news, road warriors: HTC no longer means horrendous battery life. With the One X, HTC has been upgraded to acceptable.

In my tests, I got between 10 to 12 hours on the One X through moderate use from a full charge. It was enough to get me from 9 to 5 and would generally run out around dinner time. It's not what you'll get from other premium AT&T options like the iPhone 4S or Galaxy SII, but that's a totally reasonable amount of battery life to expect from a 4G smartphone with a 4.7-inch screen.

So, then, what is the one 'X' against the One X? Well, it's not a smartphone for those who consider themselves non-conversant in tech -- the Lumia 900 and iPhone 4S are better options for casual buyers and users. Those used to Android might be disappointed that the battery is not removable and that there is no SD slot for additional memory or HDMI-out port for showing the contents of your display on a large screen.

Which is not to say that this is not a great phone -- it is. One of the best you can buy, if you're looking for a powerful, do-everything handset. Android 4.0, and its widgets, and close Google integration, and customization capabilities, and improved design, represent the zenith of mobile operating systems right now. This is a phone for power users, geeks, tinkerers photographers, those who are never far from their smartphone and want to do everything from the gadget in their pockets.

A rose by any other name is just as sweet, and the One X by any other name would be just as high an achievement. The One X is one excellent smartphone, with one exquisite screen, one extraordinary camera and one exemplary operating system. If only we could do something about that one execrable flaw -- its name -- we might be in business.

THE CAPTAIN GADGET SPEC SHEET FOR THE HTC ONE X
PHOTO GALLERY
The HTC One X: Product Shots, Camera Comparison And Speed Test
Download
Calling all HuffPost superfans!
Sign up for membership to become a founding member and help shape HuffPost's next chapter
Join HuffPost

HTC One X Review: AT&T's New Android Phone Is One Of The Best You Can Buy
The HTC One X: Product Shots, Camera Comparison And Speed Test 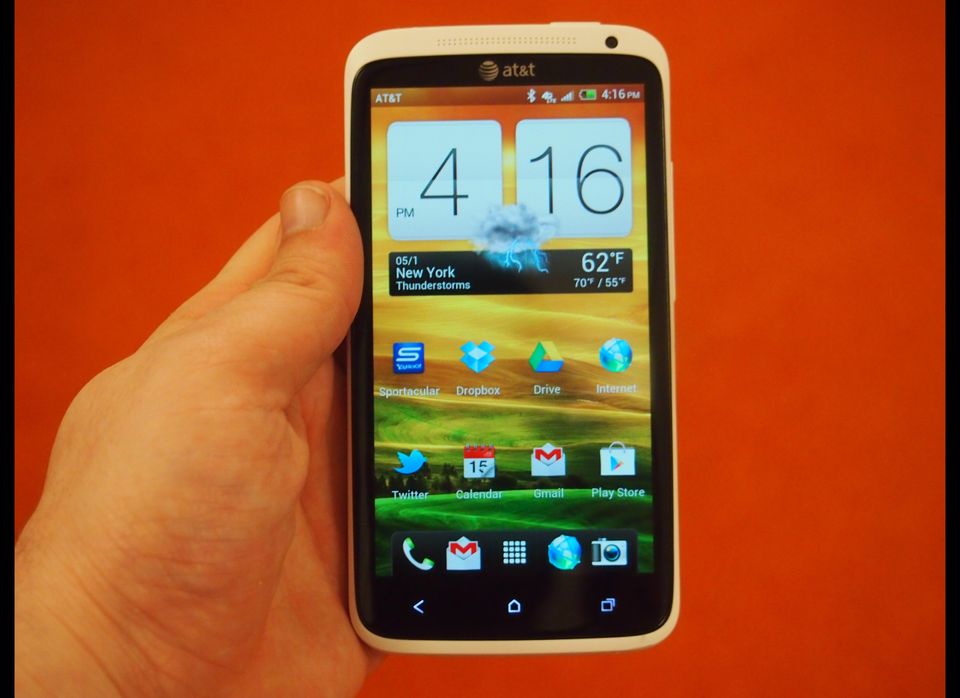 1 / 27
The HTC One X
Running Android 4.0 "Ice Cream Sandwich," the most robust mobile operating system you can get. <em>Image credit: HuffPost</em>