A stunning new photo from the Hubble Space Telescope has captured an unprecedented panoramic view of the Tarantula nebula, revealing its bright heart of massive stars.

The photo is actually a colossal mosaic — one of the largest ever built from Hubble images — and shows an intense star-forming hotspot called 30 Doradus. Hubble's science team unveiled the image today (April 17) ahead of the 22nd anniversary of the iconic space telescope's launch on April 24, 1990.

The image covers an area about 650 light-years across that includes so many stars that their mass would add up to millions of our own sun if combined, they added. (One light-year is the distance light travels in a year, about 6 trillion miles, or 10 trillion kilometers).

The Tarantula nebula is located 170,000 light-years from Earth in the Large Magellanic Cloud, one of the smaller satellite galaxies that hover around our own Milky Way. Inside the nebula is 30 Doradus, which, because of its local proximity to our galaxy, has long been a cosmic laboratory of sorts for astronomers studying how stars are born and evolve.

The most massive runaway star ever seen and one of the fastest rotating stars are just two of the region's tenants, Hubble researchers said. Star clusters from 2 million to 25 million years old can also be found.

The furious pace of star birth inside 30 Doradus is partly fueled by the Large Magellanic Cloud's neighbor, the Small Magellanic Cloud. In the Hubble view, various stages of the star life cycle are evident, ranging from embryonic stars a few thousand years old to stellar giants that live fast and die young in supernova explosions. 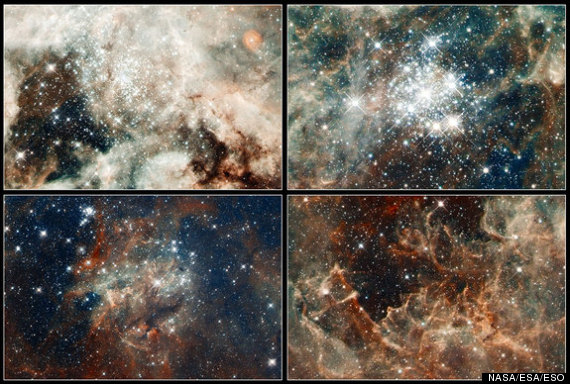 The bright, shining heart of 30 Doradus is a star cluster called NGC 2070 that astronomers suspect is relatively young,  just 2 million or 3 million years old. The cluster is filled with about 500,000 stars and has a dense core that includes some of the most massive stars in the universe. It's these mega-stars, which can contain more than 100 times the mass of the sun, that carve the stunning shapes into the gas clouds of 30 Doradus, researchers said.

To generate Hubble's new view of the Tarantula nebula, astronomers combined observations from the space telescope's powerful Wide Field Camera 3 and its Advanced Camera for Surveys. A total of 30 scans of the region, 15 per camera, were recorded in October 2011 to create the image. Observations from a telescope at the European Southern Observatory in Chile augment the already spectacular view.