The five exoplanets with hints of water are all scorching-hot, Jupiter-size worlds that are unlikely to host life as we know it. But finding water in their atmospheres still marks a step forward in the search for distant planets that may be capable of supporting alien life, researchers said.

"We're very confident that we see a water signature for multiple planets," Avi Mandell, of NASA's Goddard Space Flight Center in Greenbelt, Md., lead author of one of the studies, said in a statement. "This work really opens the door for comparing how much water is present in atmospheres on different kinds of exoplanets — for example, hotter versus cooler ones." [?The Strangest Alien Planets (Gallery)]

The atmospheres of all five planets showed signs of water, with the strongest signatures found in the air of WASP-17b and HD209458b.

"To actually detect the atmosphere of an exoplanet is extraordinarily difficult. But we were able to pull out a very clear signal, and it is water," Drake Deming of the University of Maryland, lead author of the other recent study, said in a statement.

Water is thought to be a common constituent of exoplanet atmospheres and has been found in the air of several other distant worlds to date. But the new work marks the first time scientists have measured and compared profiles of the substance in detail across multiple alien worlds, researchers said. 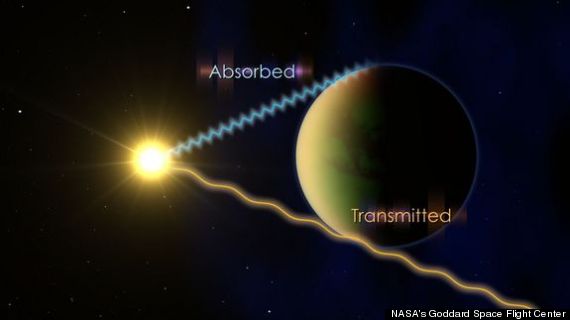 This NASA graphic shows how astronomers determine what is in the atmosphere of an exoplanet. Astronomers track the planet as it passes in front of its host star and study which wavelengths of light are absorbed.

The water signatures were less intense than expected in all cases, likely because the five hot Jupiters are surrounded by a haze of dust, researchers said.

"These studies, combined with other Hubble observations, are showing us that there are a surprisingly large number of systems for which the signal of water is either attenuated or completely absent," Heather Knutson of the California Institute of Technology in Pasadena, a co-author on Deming's paper, said in a statement. "This suggests that cloudy or hazy atmospheres may in fact be rather common for hot Jupiters."

The study led by Mandell came out today (Dec. 3) in The Astrophysical Journal, while the paper led by Deming was published in September in the same journal.