Why is Mike Huckabee obsessed with Hitler and the Nazis?

Talking about the the U.S. nuclear deal with Iran he recently said in an interview that:

This president's foreign policy is the most feckless in American history. It is so naive that he would trust the Iranians. By doing so, he will take the Israelis and march them to the door of the oven.

It's not only an outrageous comparison (Obama = SS guards), and utterly disrespectful to everyone who was murdered in the Holocaust, Jew and non-Jew. It's also idiotic. People were marched to gas chambers, not ovens. They were gassed and then their bodies were burned in crematoria.

The hyperbolic blowhard can't even get his scare-mongering right. 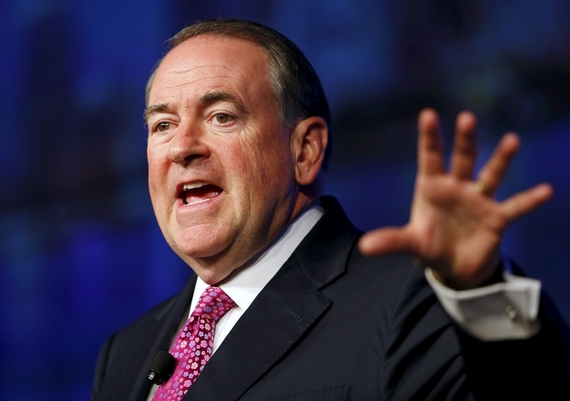 This isn't the first time Huckabee's invoked the Nazis, and probably won't be the last. Responding to a caller on a radio show who falsely claimed the Nazis took away German citizen's guns, he said:

People do forget that. And by the way, [caller] know, that when you bring that up you get people who get crazy on us, and they'll start saying, 'Oh there you go comparing to the Nazis.' And I understand the reaction, but it's the truth. You cannot take people's rights away if they're resisting and if they have the means to resist, but once they're disarmed and the people who are trying to take over have all the power, not just political, not just financial, but they have the physical power to domesticate us and to subjugate us to our will there's not a whole lot we can do about it other than just plan to die in the course of resistance. It's very true [caller], and I appreciate you bringing it up. I know that people are probably calling and saying you know you shouldn't have brought that up. In every society and culture where dictators take over, one of the things they have to do is get control of the military and the police and ultimately all of the citizens and make sure the citizens are disarmed and can't fight in the streets. Gosh I hope it doesn't come to that.

In fact, the only people in Germany whose gun rights were restricted were the Jews. Huckabee was completely wrong, he was simply scare-mongering.

Huckabee has also drawn connections between Nazi Germany's extermination camps and the "culture of lies" in America about, of all things, marriage equality.

For a man who claims to have visited Auschwitz and Birkenau three times, he doesn't seem to have learned anything there except how to dishonor the memory of millions of Holocaust victims by contemptible bloviating.

Lev Raphael is the author of 25 books including the memoir/travelogue My Germany.