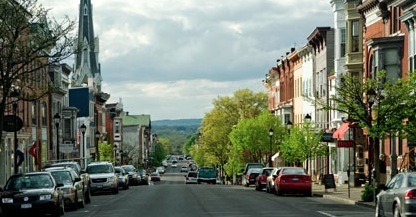 I had a house in Rhinebeck, upstate New York, in the '80s, before Bard College had its very own Frank Gehry theater, before there was edible food on Main Street and certainly before nearby Hudson was hip and happening. Back then, Hudson, a dilapidated whaling town, was known for two things: crack and prostitutes.

Now, the crack is gone and the only prostitutes left are the Antique Dealers. (That's a joke, guys; don't get upset.) Lately, I've heard that Hudson can compete with Chelsea as the most fashionable place to browse and buy art, so last weekend I took Amtrak up the river to see for myself.

Boarding the train at Penn Station was a macabre experience as the female voice coldly said on the PA, "There will be no service on Amtrak between here and Washington. Please see an agent for a refund." But despite the somber start, the mood lightened as we left NYC and headed up the Hudson. From my years of doing this trip, I knew to sit on the left hand side of the train so that the views of the majestic Hudson were my scenic companion for the short two-hour ride into Columbia County. 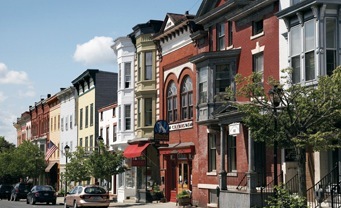 My destination in Hudson was a solo-show at Galerie Gris featuring new work by Frank Tartaglione, an artist I've been following since I discovered him in 1979 at the Angus Whyte Gallery in DC. In the years since that show, Tartaglione became one of America's foremost decorative painters, designing and executing murals for the rich and powerful and working at the Metropolitan Museum of Art and the Reagan White House. Throughout that period he continued to paint large abstract oils--very much in a different key from his representational work--but exhibited rarely in New York. There was were solo shows on the west coast and at the Merchant Ivory Foundation, and group shows at Chelsea's George Billis Gallery and elsewhere, but this was the first time I'd seen his work in some time.

The opening didn't start until 6 so I had planned a gallery walking tour for the first part of my weekend in the country.

Walking the short blocks from the station, I saw that the crack dens had miraculously transformed into Main Street USA, straight out of Disneyland. The clapboard houses were freshly painted, the window boxes in full bloom, and the fully restored federal brick mansions screamed, "Look at me, I'm gorgeous." Even the metal whale hanging above an entrance to remind visitors of Hudson's heritage had exactly the right amount of patina to show it had been lovingly restored. I have absolutely no problem with urban renewal, especially when it's all so tastefully done (thanks again, oh great decorators.) Of course one has to wonder what happened to the poor, but that's probably another article.

With a rainbow flag waving proudly up ahead, I knew I was in the right place and started my jaunt uphill Warren Street the main drag. On my last visit to Hudson many years ago, there were two fine Galleries, The http://carriehaddadgallery.com and John Davis Galleryjj, but since then the galleries have multiplied like art-loving rabbits and now one appeared just about every fifteen feet.

The angular ceramic sculptures of Cody Hoyt at the Jeff Bailey Gallery (127 Warren Street) immediately caught my attention. Hoyt began his career as a printmaker and transferred his skill into these gravity-defying, table-size sculptures that reference origami, the machine age and cubist space. The decorations on the work are formed by layering different colors of clay, slicing them up and then laying them on the ground; it's easy to see the influence of his work as a printmaker, as he seems to be "printing" with clay. 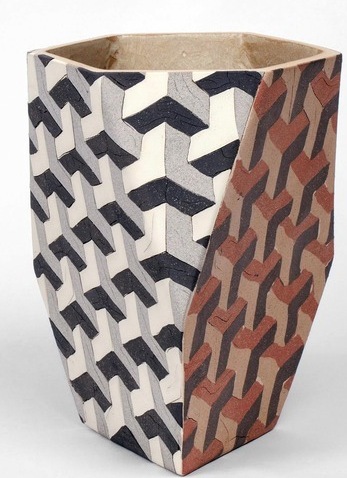 Perhaps the old and new Hudson do still coexist. I strolled past two older African-American gents gainfully playing chess in front of a uni-sex barbershop before I reached the J. Damiani Gallery gl(237 Warren Street) and discovered Joan Damiani's quasi realistic paintings of cars. I love the power of Carlos Alvarez's Los Angeles crashes and the crushed-car sculptures of John Chamberlain so I felt right at home. Ms. Damiani was not only the proprietor but the principle artist in the show, entitled The Road Will Never Be the Same. In addition to her cars, she displayed beautiful works of Columbia County, my favorite, a buttery painting of a house on Warren Street. The street clearly casts sensuous shadows and Damiani captured them in her simple, yet elegant painting of a store with a green topped fire hydrant balanced by a flower pot in the window. This Hopper-esque street scene seemed to sum up both the old and new Hudson in one sweet painting. 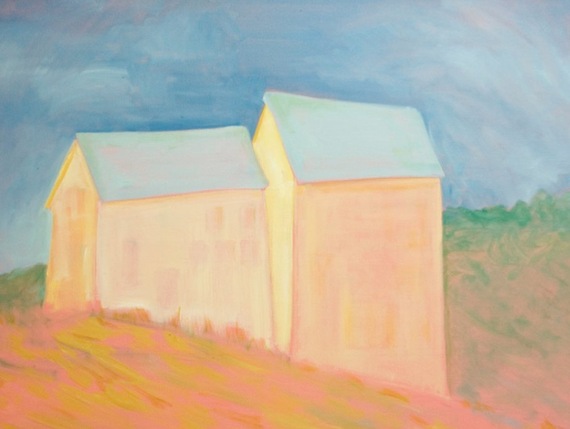 The most expansive gallery on my visit--and the one which would fit comfortably on 19th Street in Chelsea--is the Caldwell Gallery (355 Warren Street) with its grey and white walls and black astro-turf floors. This is the only gallery I saw whose principal collection was the secondary market, paintings by artists who have passed and are now being sold again. This also made the prices at the CGH much higher than the other shops. Caldwell is a new addition to the community, having only been there a year, but what an astonishing addition. Exhibited at the front is a spectacular John Grillo, who died recently at 97. He was a student of one of my favorite artists, Hans Hofmann, and his effervescent explosions of yellows, oranges and the entire array of sunny colors eagerly recall his mentor but with a less formal brush and softer-edged geometric shapes.. My art walk was getting better and better! 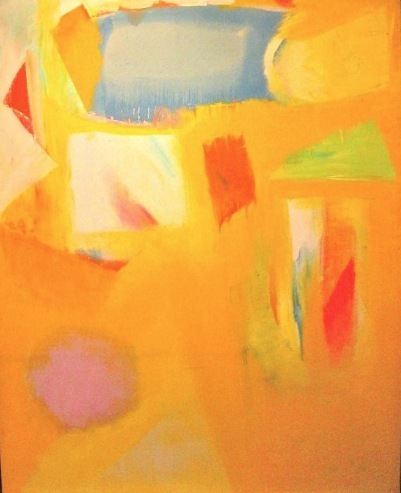 I next passed the Hudson Opera House where a student show was taking place. Hudson High School had arranged a mentoring program between its student artists and local arts professionals; by a happy coincidence, 16 year old Danny Gelles, a budding photographer, was partnered with Tartaglione, the artist I'd set out to see. After being dazzled by his architectural photograph of some sort of steel structure, (which I later found out was a section of the Eiffel Tower,) I couldn't help asking him about his mentor. "Frank," he said, "offered me a look into the abstract world." 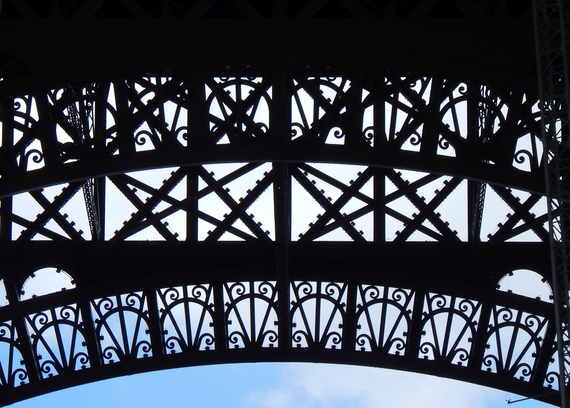 And what a beautiful abstract world Tartaglione has created for his current show. My last stop was the afore mentioned Gallerie Gris, located at the top of Warren Street and one of the smaller galleries, but size wasn't an issue as Tartaglione's works blew the roof off. He had always circled representational elements in previous work, but here he seems to have abandoned completely any realistic conventions and instead explores expressionism with an emphasis on compositional content. In the biggest works, "Look up! Green" and "Look up! Blue," the energetic surfaces are united by rich saturated color that creates strong, structural effects. The planes of pigment build formal arrangements that feel vital to the visual experience of the work, and Tartaglione's embrace of abstraction is emotionally evocative without becoming narrative. Although I heard comments from the packed crowd about how the paintings reminded them of the towering banks of the Hudson bisected by the river, the images do not appear to refer to actual things, but respond to an observed visual world and communicate the pleasure of their own making.

These paintings are very lush, painterly and very inviting, the work of an artist at the height of his powers. Tartaglione applies mica in the final stages of creation, and the paintings glitter literally as much as they glitter figuratively. The Gallery quickly grew overcrowded, and I went in and out many times, but each time I returned I experienced a new sensation with the paintings. And each time I returned the red dots on sold works seemed to grow exponentially. 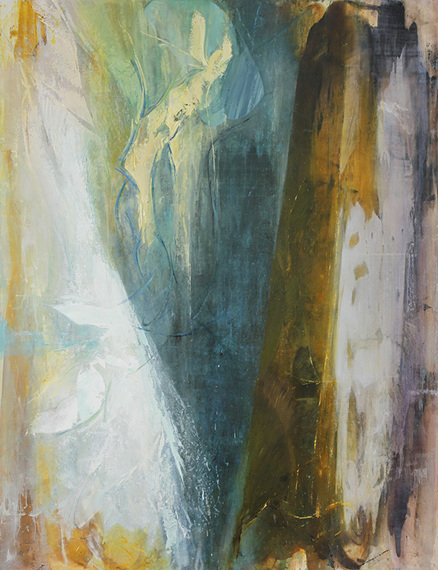 My preferences kept shifting, but my favorites were two paintings that hung opposite each other at the gallery entrance. One was an organic cardial-shaped mass divided into two sections, a darker side full of browns, greens and black, that shared the space with a lighter yellow, ash-blond field, with bursts of translucent white (hope?) floating above. Its companion piece described a more violent shape, and although the darkness was less intense, it had a more prominent space in the painting; it almost overwhelmed the lighter side, the white almost seeming to be attacked by the brushwork. 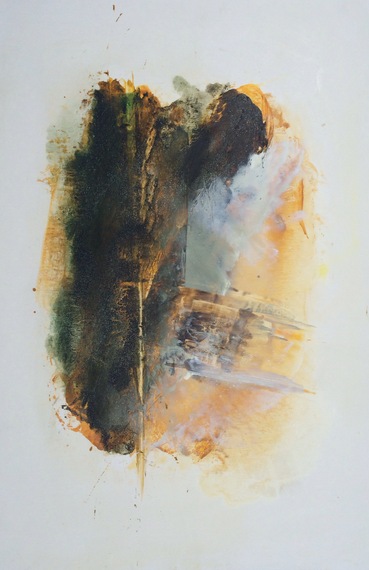 Tartaglione's works seemed to reflect the very emotions of life itself: happiness, anxiety, dare I say it, love(?) and yet a bit of darkness, a small shadow of doubt seemed to hover over the world. Sometimes that doubt was blacker than other times, but the life force, the force of the paint itself, was always triumphant.