Comparisons may be odious, but in the case of Hudson Yards and Rockefeller Center, they may be inevitable too.

Both were initiated during major economic downturns. Both are monumental mixed-use developments of near-astonishing scale. And both called upon the talents of the most gifted architects of their times.

Hudson Yards in particular, though, has challenged conventional thinking and brought about a one-of-kind collaboration between planners, developers, architects, landscape architects, engineers, and even soil scientists.

"I'm an urban planner and I'm amazed at the epic scale of it all - it's three city blocks that are contiguous," says Michael Samuelian, vice president at Related Companies. "It's a rare opportunity to build a new neighborhood from scratch - over these massive tracks - and create a central piece of open space."

The massive tracks he mentions are 30 rail lines in a storage yard for the Long Island Rail Road, along with three subsurface rail tunnels used by Amtrak and New Jersey Transit, and a fourth passageway, the Gateway tunnel, completed in late 2014. They're all directly below the 28-acre development. To build above them has meant sinking hundreds of caissons into the bedrock between and around the tracks, and then building a platform to house infrastructure and support the buildings and landscape above. 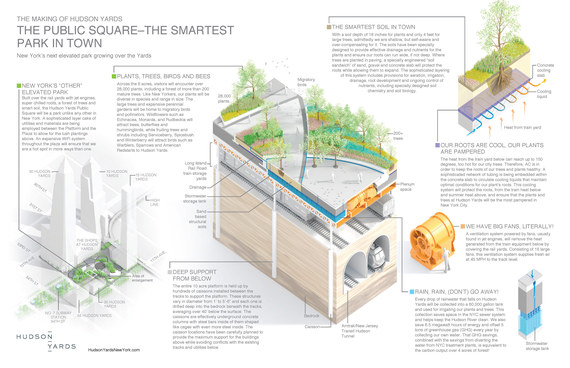 The development's master plan is by Kohn Pedersen Fox (KPF), which also designed two of the towers on site. Others are by SOM, Diller Scofidio + Renfro and Rockwell Group. Still another is a collaboration between Eugene Kohn, Kevin Roche and KPF. The engineering is by Thornton Thomasetti.

Landscape design is by Nelson Byrd Woltz, and includes a public plaza that's four and a third acres in size, with plantings sunk anywhere from 18 inches to seven feet deep, in soil that must be cooled so that plants can survive.

That's right. It's cooled down from temperatures as high as 150 degrees, from the trains that run below. "There's air conditioning that's cooling the trains, but spewing hot air outside," Samuelian says. "So we're cooling the soil by running air through a concrete slab so the tree roots don't get shocked by the temperature below." 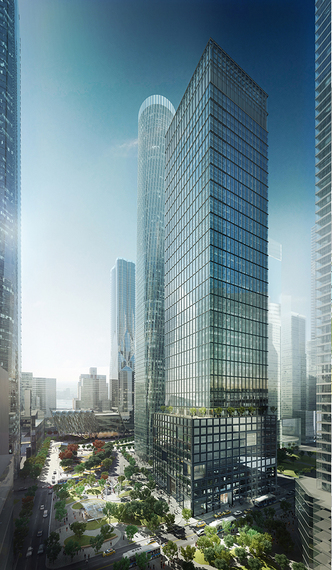 Some of that soil is in planters, some is above the platform and some is below, but it's all a special mix, designed by soil scientists called in specifically for the project. "It's sand-based, to get more air and nutrients into the plants," he says. "It's wide, not deep, so the trees can spread out."

Rainwater drains into a 60,000-gallon collection tank that stores it and reuses it to irrigate the site's 225 trees - including native ginkgos and honey locusts, plus ornamentals in garden settings - for a net zero impact.

When it's finished in late 2018, this is a project that promises to rival its mid-town predecessor in terms of the "Wow!" factor - and one that took some of its cues from the 1930s Art Deco development as well."We've thought of ourselves as a legacy like Rockefeller Center," Samuelian says. "We looked very hard a lot of the sections there below grade." 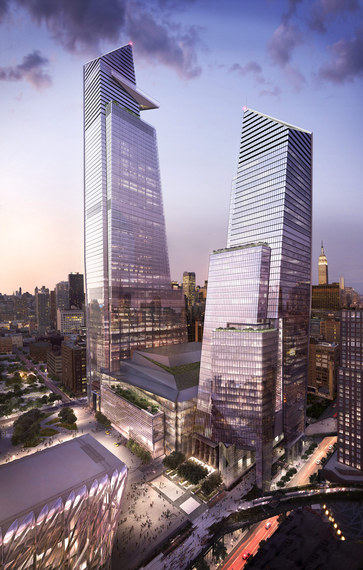 But even with all the gee-whiz engineering underneath the buildings and the parks, it's what's happening above grade that counts most for urban living. "One thing that I'm most proud of is bringing nature back to Manhattan," he says. "To invite the birds, bees and pollinators and clean the air - we're bringing it back in a smart and innovative way."

It's no private affair, either, since the green square at Hudson Yards will be open to all. Which - for all its its soaring heights, its engineering, its flora, and its fauna - may be the development's greatest gift to New York.

J. Michael Welton writes about architecture, art and design for national and international publications, and edits www.architectsandartisans.com, where portions of this post first appeared. He is also the author of "Drawing from Practice: Architects and the Meaning of Freehand," from Routledge Press.