In this week's issue, Peter Goodman takes a look at the increasing number of companies embracing mindfulness, meditation and other stress-reduction practices.

Peter spotlights Promega, a biotech company on the outskirts of Madison, Wisconsin. Promega offers meditation classes, yoga, fitness centers, workspaces infused with natural light and healthy meals -- all features the company's executives determined were good not only for employee well-being but also for the bottom line. As chief medical officer Ashley Anderson Jr. puts it: "a healthy workforce is a productive workforce."

Peter also delves into the scientific research on the link between mindfulness and productivity. Richard Davidson, a neuroscientist at the University of Wisconsin in Madison, has shown that meditation leads to changes in our brains, urging us toward wellbeing and resilience. He is currently trying to determine whether "a concentrated meditation program deployed at the company level can yield savings in health care costs." On that point, Aetna CEO Mark Bertolini -- who brought meditation and yoga to Aetna after they helped him recover from a serious skiing accident -- offers a profile in leadership: "I may be weird, but I'm also in charge of the company."

The cover of this week's issue of Huffington: 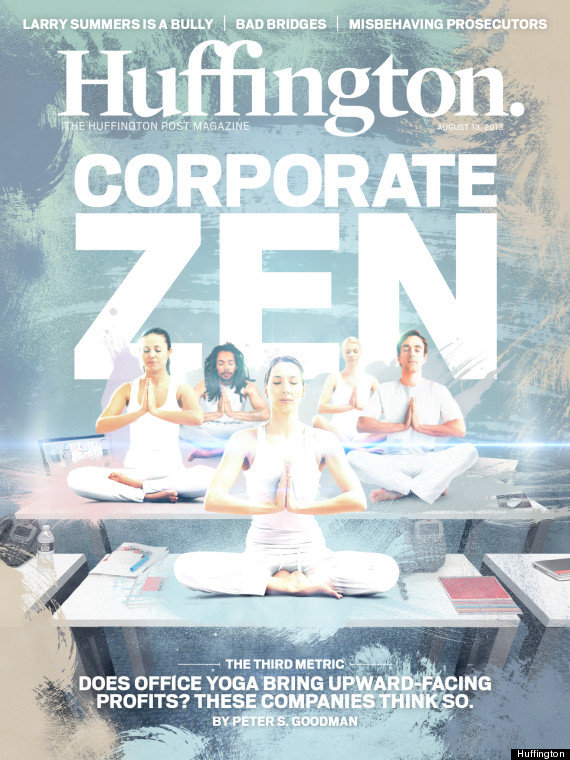 Elsewhere in the issue, Radley Balko takes a close look at prosecutorial misconduct and lack of accountability in several local and state judiciaries, with a focus on Louisiana.

Radley hears from John Thompson, who was wrongly convicted twice and spent 18 years at the Louisiana State Penitentiary, 14 of them on death row. His death warrant was signed eight times; when his attorneys finally found the evidence that cleared him -- evidence his prosecutors had known about for years -- he was only weeks away from execution.

Radley's conversations with local law officials reveal major obstacles preventing them from imposing any real accountability on wayward prosecutors. As Louisiana's chief of the Office of Disciplinary Counsel says, in his 17 years on the job he can only recall three occasions when a prosecutor was disciplined for misconduct.

"This isn't about bad men, though they were most assuredly bad men," says the wrongly-convicted Thompson. "It's about a system that is void of integrity. Mistakes can happen. But if you don't do anything to stop them from happening again, you can't keep calling them mistakes."

Finally, as part of our ongoing coverage of stress, we're featuring an infographic showing some of the most worrying statistics on the personal, economic and social costs of overwork and burnout.